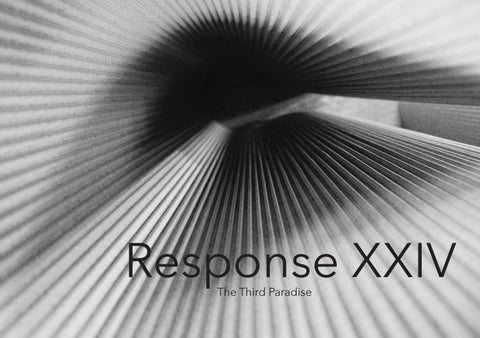 Welcome to the 24th issue of The Response.

The Response is a magazine put together by members of the Fabrica volunteer programme that runs in conjunction with each site specific exhibition held at Fabrica. As the name of the magazine suggests, volunteers are invited to respond directly to each artwork and the themes they explore, using any medium.

The magazine is a fascinating and unique way to document the many ways in which art can affect us, and to share them with visitors to the space.

The Second Paradise “My pleasure is real but my toys are artificial” “We have polluted the world through our need to see the world” “We built taller towers in memory of our arboreal past” “Envious of birds, we made machines to take us to the stars” “Technology gave me the love of my life” “The trees in the wood had long straight trunks and we saw the ship we would make from them” “We took the apple and over generations we made it bigger and better” “We built machines to make ourselves obsolete” “Reflection and consideration of the world around me allows me to survive” “Home is my sanctuary in a world of danger” “Make-up gave me my power” “Education and intelligence has enabled me to persuade and manipulate all around me” “Texting helps me communicate” “We retreated into worlds of our own making” “Medicine and drugs made me stronger and faster and perform better” “We used language and abstract thinking to navigate the world and to have the illusion that we are not alone in our hallucinatory inner world. Language both unites and separates us.”

“Money has made me the most powerful man on earth” “The Internet has allowed me to broaden my knowledge in an instant” “As I fly I feel invincible” “Invention is not re-creation” “We cut nature and its cycles into smaller and smaller pieces” “Mass production makes produce cheaper” “The factory choked my lungs but fed my family” “Nylon is better than wool” “To separate ourselves from the violent, chaotic nature of the natural world we became creators ourselves of a controlled world of artifice” “We found more efficient ways to do nothing” “We made cameras so we can see things our eyes can’t” “I saw the children I would have and they did not meet my standards” “Designer labels make me exclusive, special and superior” “Is plastic really stronger than metal?” “I feel plastic fantastic” “I have to rely on external professionals because I am unable to fix and create what I need” “Where there is a strong creative drive there is a strong destructive drive too. We are marvellous creators and destroyers” “I used a shortcut to gain understanding” “I could have been deformed – or dead – medicine fixed me”

“I feel plastic fantastic” “I have to rely on external professionals because I am unable to fix and create what I need” “Where there is a strong creative drive there is a strong destructive drive too. We are marvellous creators and destroyers” “I used a shortcut to gain understanding” “I could have been deformed – or dead – medicine fixed me” “The most powerful men on earth made money” “Clothes enable me to change my personality” “Economy is not just about money, but about how we manage our resources, physically and mentally” “La daa da, La daa Di Da” “Money, power, control, comfort me in a world of unknowns and chaos” “We synthesised natural stimulants to have control (or lose control?) over our neurochemicals” “Facebook and social media give me anxiety” “BT, More Power To You!” “Skype enables me to connect and stay connected with my loved ones” “Computer games can be fun but can also prevent a child from engaging with their imagination in play”

The Third Paradise “We grow artificial meat to cut demand of slaughter of innocent cows and over-breeding” “We will find new homes out of unexpected sites – an old train station will become our castle, regenerating like crops from the soil” “Technology brought us together to listen and share our stories of love and life on this earth” “You don’t have to travel half way around the world to see the world around you” “We will grow what we need and replenish what we take” “With love we now make machines that are beautiful, useful and sustainable”

The Third Paradise, The Labyrinth and The Well By the late 1950’s Italy was experiencing an economic miracle. The numerous political dealings, wranglings and coalitions that had taken place among partisans, fascists and the Vatican at the end of the war - which evicted the royal family from the political sphere in order to format the nation into a republic in 1946 – had run out of steam. This initial pragmatism of the immediate post war government was fast losing its grip on society. It was now falling into a void of power and credibility. The country was experiencing a political vacuum. Simultaneously, the country was effecting its post war economic recovery. The north of Italy was a power house of industrialisation. It was creating wealth, in various degrees, for all Italians. The old tangible social and structural order of pre-war Italy; a regionally articulated agricultural population, substantially controlled by the church, was turning its interests towards consumerism. The Marshall plan had helped greatly to format this impetus. American culture, propagandised via american films, was sweeping the country. Italians wanted white goods in their kitchens, new clothes to go out in, and leisure as much as they could afford it. The Arte Povera movement was born from the liminal space created by this vacuum. The movement was comprised of men, bar one woman; Mario Merz’s wife, Marisa. It theorises and addresses the effects of the fast developing society in which Pistoletto, among the initial 17 artists, engage with those new societal paradigms at the beginning of the 1960’s. Arte Povera, a term coined by art critic Germano Celant in 1967, engages the viewer in an artistic discourse where the conventional ornamentation, present in art then, is stripped away in order to suggest the impact of the loss of community values as society hurtles into consumerism. The approach was to use whatever material was available to the artists and make works which would conjure the nature of a changing society. How necessary that appeared to those artists at the time, as well as making reference to the fact that much of the sense of cultural identity was being eroded by those societal changes. Arte Povera was both the name as well as the engine for theorising on the need for change and reflecting on its impact. In that sense, Arte Povera can appear obscure at times to the non initiated. Its physical representations are simple, at the risk of being simplistic. This is where the intrinsic sense of “Povera” takes its full artistic meaning. By making visible, in seemingly simple shapes, the results of continuous circular intellectualism and complex interpretations of the impact of the changing world, our place in it and our sense of responsibility towards it.

Arte Povera was somewhat, at that time, an international intellectual endeavour. Artistic representations in the vein of Arte Povera can be seen in Mexico; making reference to the political vacuum similar to the one experienced in Italy. The punk movement of the late 70’s and early 80’s, to an extent, makes reference too, to the necessity of challenging the crystalised politico-economic norms of its time; the corrosive effects of those political norms on individuality and human creativity. Pistoletto emerges from the movement as a theorist of the necessities of societal change. He grapples with the ideas of sustainability early on and develops them further to the present. At Fabrica we can enjoy the result of the workings of an artistic mind engaged in narrating our place in society in a sustainable framework. The labyrinth reminds us of the many paths and reflections we enter into with ourselves and the world around us in order to make sense of our place in it and responsibility towards it. The path is both process and outcome. One arrives at the well and stares at the mirror to find oneself being subsumed into the artwork itself. Are we looking at an art work? Are we it? Are we one of its elements? What is our part in sustaining the world in which we live? Observing the third paradise sign inside the well, we are sent back into cerebral reflection. Pistoletto’s paradise echoes the original Persian meaning of the word; a walled garden. He takes the view that society has evolved from the natural world into a technological world which might now be detrimental to us. He suggests that the third circle ought to be our engagement with sustainability and that is where we can integrate both the natural world and the technological world and heal our conflicted societies. In that sense, he presents us with an interactive show. Pistoletto hasn’t stopped here. He has created his cittadellarte in Italy. As part of the many artistic workshops, seminars and conferences, he has instituted a festival called Rebirth Day, on 21st December to mark a point in the year when we can rekindle our connections with his themes of sustainability. Like the third paradise, the Rebirth Day is a point in time that creates a continual cycle of renewal to the themes of societal change and the awareness of attendance to how we can influence its impact. Arte Povera is tremendously and subtly rich in meaning. Didier Montillaud 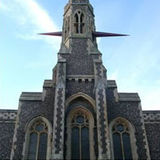