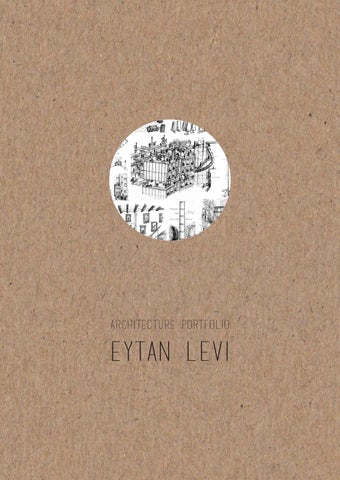 Eytan Levi was born in Paris, France. He graduated in 2017 with a B.Sc in Architecture from the Swiss Federal Institute of Technology (EPFL) in Lausanne, Switzerland after an exchange year at the University of Tokyo. He has worked on exhibitions and installations at Junya Ishigami and Go Hasegawa in Tokyo before engaging in a larger scale of projects at Herzog & de Meuron in Basel, Switzerland. Eytan is currently pursuing a Master of Architecture at the Massachusetts Institute of Technology (MIT) in Cambridge, MA, United States.

CONTENTS Bachelor 1st semester | A path up a column

Bachelor 6th semester | Sleeping in the garden Tokyo, Japan | The University of Tokyo

A PATH UP A COLUMN A spatial play in five acts Bachelor 1st semester, December 2014 | EPFL

Designed as a journey through a column, this project is intended to raise the user’s awareness of the contrast existing between the inside and outside of the Théâtre de Vidy, built by Max Bill in Lausanne, Switzerland. On the path from the bottom to the top of the column, one encounters several playful interventions - a 17-storey ramp, a slab, a wall, a balcony, a stairway and a narrow corridor - that question the conditions of insideness and outsideness.

Above: pictures of the 1:33 model | Right page: construction drawing

SITTING ALONG A LINE A linear table proposing a spatial idea related to the body Bachelor 1st semester, November 2014 | EPFL

Splitting of a single table in seventeen planes - each ergonomically adapted to a specific body position - offering a linear time interpretation in a site associated with a circular temporality. The project only uses hand-made joints inspired from Japanese traditional joinery and thus no screws or glue.

Above: picture of the assembled 1:1 prototype | Right page: construction drawing

ESCAPE BY THE LAKE A getaway for actors in Lausanne Bachelor 2nd semester, May 2015 | EPFL

This space encloses a path allowing actors to escape from the stage of the ThĂŠĂ˘tre de Vidy in Lausanne during the interval of a play. Indeed, I came to the conclusion that acting alone on a stage while facing a large group of passive anonymous may lead to a need to disappear. The project consists in suspended layers that structurally escape from the theater: instead of stable volumes put on the ground, the proposal does not provide any large flat surface nor any stability as the layers are moving with the motion of the user. Regarding the form, the project is designed to look like an extension of the theater when seen from afar - with only orthogonal volumes - that eventually appear to be completely different from the inside.

Above: construction drawing | Left page: picture of the 1:33 model

Above: drawing of the unfolded path through the project | Right page: picture of the 1:33 model

MADE WITH LINEN A theater on a bridge over the Rhône river near Geneva Bachelor 3rd semester, December 2015 | EPFL

Built in a location that was known in the 18th century for its linen production, this project connects an extremely densely populated area - the Lignon - with fields that we decided to use for cultivating linen. Indeed, the pedestrian bridge is entirely built with linen ropes made on site and renewed every summer during a festival to celebrate the historical local material. The bridge aims at redifining and reviving the Lignon’s concrete slab - currently only used for circulation - by offering a visual and physical escape towards the other bank of the Rhône river, where we have set up a theater stage one can look at from rope bleachers located within the bridge.

1:200 process models to find out the right structure for the rope system

Plan and section of the bridge

BETWEEN TWO WALLS A shelter for children in Geneva as a tribute to Rousseau Bachelor 4th semester, May 2016 | EPFL

In 1778, Jean-Jacques Rousseau dies in Geneva but his memory keeps living on the eponymous island in the RhĂ´ne. A few centuries later - in tribute to his commitment to education - a shelter for children is erected in the heart of the city, using only techniques and materials of the Enlightenment. The shelter seeks to nestle children who have been rejected by society and expresses its protection through its position against the current of the RhĂ´ne and its mineral materiality. The building consists of two inhabited walls - respectively for communal and intimate uses - separated by a large through North/South gap. The degree of intimacy varies on each floor following the structural system of the refuge: the most individual spaces are located near the ground and gradually open to form collective spaces on top of the shelter.

Pictures of the 1:50 section model and of the 1:10 construction model

View of the project from the exisiting bridge

As temperatures in Northern Mexico are expected to rise by 3 to 4 degrees Celsius before the end of the century, the future of wine-making in Valle de Guadalupe looks uncertain. This project explores the various scales of temporality occuring on a topographical ridge. The winery is therefore designed to possibly evolve into different programs according to further local needs. The building is composed of a lower level that benefits from the earth’s thermal mass and that is laid out to passively maximize ventilation of certain spaces and insulate as much as possible other areas from outdoor fluctuations. This buried level is covered by a public platform that acts as an interface between locals and tourists through changing programs. The building uses the local soil through its rammed earth walls and anticipates long-term changes when wine making may give way to other forms of agricultural production. Professor Sheila Kennedy Selected for the MIT Department of Architecture’s Archives

The campus of Trinity College in Dublin is split between its Humanities and Engineering sides. While the former offers numerous outdoor and informal spaces, the latter mainly consists in research buildings associated with a single department. This intervention takes over Trinity Engineering’s largest left-over space to physically connect three existing buildings through a continuous surface. The building footprint is limited to only two locations on the ground floor to reinforce the current role of the area - that of a gateway between the city and the campus - and thus to maintain existing pedestrian fluxes. To achieve its minimal impact on the ground, the project requires a novel structural system: by linking forty radially-placed structural posts with an uninterrupted helix, torsional moments are utilized and allow for longer cantilevers. Professors Shih-Fu Peng and Róisín Heneghan

Unfolded elevations of the 40 columns

Picture of the 1:250 structural model

AFTER THE BANK A 1960’s office building turned into a housing cooperative in Belgrade Master 2nd semester, May 2019 | MIT

Today, the former headquarters of Energoprojekt and Beobank stand tall at the heart of old Belgrade. Since the façade panels were removed in 2016, the tower’s concrete skeleton has offered a visual gateway between two sides of Belgrade. Driven by the generic domino structure that organizes the tower, this project offers a systematic solution to confront the long history of housing crisis in Belgrade since World War II. By providing abandoned buildings to housing cooperatives; dwelling can be developed at a cheaper cost and thus become more affordable in the city. To maintain the existing transparency for residents and external observers alike, apartments span from the North to the South façade. The rooftop becomes a gift to the city where the public can access 360 degree views. Circulation is extracted into light structures stitched to the sides and the back of the building, allowing one side to become a shared balcony for the inhabitants, and thus transforming a flat surface into a collective experience. In collaboration with Catherine Lie Professor Ana Miljački

PROPOSAL FOR “GREEN DEVELOPMENT” BLOCKED IN 2017 20,000 m2 GROSS SURFACE WHICH ACTORS WOULD BE WILLING TO INVEST IN REDEVELOPING THE DERELICT BEOBANK COMPLEX?

ACTUAL COST WHEN SOLD TO STATTWERK

Renovates abandoned building in the heart of Belgrade

SLEEPING IN THE GARDEN Student housing in a low-rise Tokyo neighboorhood Bachelor 6th semester, July 2017 | The University of Tokyo

Regarded as one of the few remaining traditional districts in Tokyo, Yanakaâ&#x20AC;&#x2122;s fabric was sweepingly different from the program of a new dormitory for one hundred students. In order to integrate smoothly in its context, the student housing was broken down to two-story buildings. However - to make sure interactions between dwellers would still happen - all common activities are located in the volume around the apartments within a greenhouse structure. The facade of this greenhouse - visually transparent - is designed to be physically porous with sliding doors and windows all over so that neighbors and students can meet and access a garden protected from the street also serving as an evacuation area for the neighboorhood in case of earthquakes.

This competition called for a meeting space in Seoul to promote Lausanne’s candidacy to organize the 28th International Union of Architects Convention. Lake Table embodies Lake Geneva’s exceptional network of connections and frames it with mountains diving into the water. Nestled between two stands along one of Seoul Convention Center’s numerous alleys, Lake Table is not revealed at first sight. From a distance, one sees a glowing drop of water evoking a foggy weather on Lake Geneva and projecting on a boat sail the shadows of the people sitting around Lake Table. In order to understand what the veil contains, one needs to penetrate through one of the four openings piercing the surface. One then discovers that the tabletop replicates Lake Geneva’s shoreline and that the four holes represent the main spots that would host the UIA Congress. Lake Table can be assembled in less than a day by three people: first, the scaffolding is set up, then the veil made like Lake Geneva’s century-old linen sails is hung and finally a reflecting-5-mm-MDF tabletop is placed. 2nd prize

SCREEN HOUSE A share house on a hill structured around the view Bachelor 6th semester, May 2017 | Personal project

I had the opportunity to spend a few days on a hill in Nagasaki, Japan, where Screen House is located. I could not get over the view on the harbour and the surrounding slopes thus I decided to develop a project around it; a share house for eight guests built on an elongated site. In order to maximize the viewing dimension, all rooms have a direct connection to the exterior thanks to their shallow depth. The landscape thus visually blends with the physically narrow spaces to create a wide space. Screen House features two types of conditions: intimate spaces such as bathrooms and bedrooms; as well as one continuous common space taking up all the remaining volume. The private rooms provide a structure for a fluid surface enabling all common activities; acting itself as an extension of the immediate context of Screen House in Nagasaki: a network of stairs linking dwelling spaces.

1. Elongated site with a view

2. Maximized volume to enjoy the view

4. Intimate spaces laid out through relationships 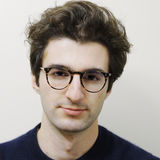 Works from 2014 to 2019 through or in parallel of my studies at EPFL, the University of Tokyo and MIT. Based on my 2018 application portfol...

Works from 2014 to 2019 through or in parallel of my studies at EPFL, the University of Tokyo and MIT. Based on my 2018 application portfol...