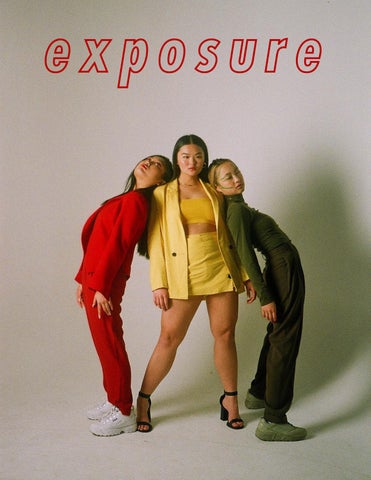 introduction For decades, American media has portrayed East Asians as an exotic species, stereotyping them as nerds or ethnic sidekicks, with the sole purpose of highlighting us as others. Western beauty standards have associated our “chinky” eyes as unappealing and our hair too dark and flat to attain the ideology that surrounds the blonde and blue-eyed women on every magazine cover. East Asians are often seen as having weak or submissive personalities and are often seen as “too foreign to belong” or “outcasts” because of the color of our skin and our nature. It’s become a norm to rarely see East Asians in the media and beauty industry, and even more rare to see them hold important roles in campaigns or films. However, like many other experiences tied to race, you don’t notice that someone is being underrepresented until that someone is you. People have learned to assume that all East Asians look the same, eat the same things, speak the same language, and come from the same place. This inaccurate, preconceived notion has created a false interpretation of Asian Americans as a whole. In the following pages, you will see the beauty of Filipina, Vietnamese, Korean, and Chinese models embracing the features that set them apart from the beauty standards that were pushed upon them growing up. EXPOSURE is a project that highlights us. Only we have the right to dictate what our cultures consist of and this magazine serves as proof that not all Asians look alike. Our work goes to show that we shouldn’t be held to the standards set by people outside of our race. We have the freedom to express ourselves in whichever way we choose, and we are choosing to take the spotlight, it’s time that we get the exposure we deserve. - EXPOSURE TEAM

My seeds are planted by Vietnamese refugees, but my roots are grown in the land of the free. Paradoxically not American enough in the states, but too American for my culture’s birthplace. As Asian Americans, we are told that we are better, but never the best. Smarter, but never the smartest. These backhanded compliments have been put in place to divide us from our brothers and sisters, whilst simultaneously undermining us from our persecutors. But we have sprouted our minds and have awoken from our slumber. I stand proud to to have my Vietnamese ideals instilled into me. I stand proud of my parents and recognize the adversity they underwent to provide this life for me. I stand proud of my mom’s broken English just as much as I am of my father’s college degree.   Asians will no longer be held to the same archaic standards placed upon us by our oppressors. Asian women will no longer be blacklisted from their pursuit towards achieving their highest potential. Each stride towards Asian representation in each varying form creates a new standard of equity called for by society. Let us redefine the nature to which we rate our potential, our beliefs and our value. It’s time to water the flowers in order for them to blossom. – ALINA LAM

“As an Asian American I always struggled to find a place to fit in. There was so much pressure to be a model minority and fitting the status quo of what it meant to be an Asian. Too bad I can’t fit all of it. I’m my own person with my own flaws and good sides. I’ve come to realize I don’t have to fit into a box I’m whoever I strive to be. That was the hardest part, figuring out who I am especially within this White American majority culture.” - VAN NGUYEN

Growing up, I was well aware of the roles that I were supposed to assume as an Asian American. I had to excel at violin, be a genius at mathematics, and become a black belt in karate, as all acceptable Asians were in the media. I wanted to be either an acceptable Asian or forget about my heritage entirely– I remember drawing a self-portrait of what I wanted my ideal self to look like when I was six years old, painting myself with curly blonde hair and blue eyes. There was never a balance for me, there was always something I wanted to change about me. I felt that in order to be truly Asian or American, I had to fit a certain mold.

Throughout school, I remember begging my mom not to pack me any Vietnamese food or else kids would scrunch their noses and tease me for bringing a gross lunch. By the time I was in middle school I was only bringing American food to lunch, trying to detach myself from Asian culture all together. I didn’t realize how much I have strayed from my heritage until someone told me I was one of the “better Asians”, implying that my detachment from my culture, I was acceptable in their eyes. I was lucky to have made Asian friends I could connect to about my heritage and feel more comfortable expressing my love of all of our delicious cuisine, bond about our Asian upbringings, traditions, and our experiences overcoming our stereotypes. There is no point in trying to completely immerse myself in American or Vietnamese culture. As long as I embrace my culture without feeling insecure due to others’ opinions, I am able to proudly call myself a Vietnamese-American. - SERINA NGUYEN

Being a second-generation Asian-American, my life is a collection of works in progress. Modeling and creative writing have become outlets for the fiery Chinese girl I buried within me long ago. She motivates me to create art because it allows me to express myself in ways I cannot outrightly say in a white-dominated society. She’s enabled me to grow into someone I’m proud to be. Although I am still finding love in the person I am today, I didn’t always feel so prideful of my heritage. I used to dream of being reborn into a white family because life would be so much easier with privilege and worth. It’s been difficult finding a sense of belonging in the repressive environment that is America. I have realized the importance of staying grounded in my Asian heritage because it will always be an aspect of my identity, whether I like it or not. It’s taken me a while to get to the mindset I currently have, but now I want to develop fluency in Mandarin, learn more about Chinese rituals and values, and the experiences my parents had as immigrants.

I’ve learned the pretty ways to write about immigrants. It starts with unclenching the raven-haired girl, laying her on the pavement, and watching as she folds into herself. Let the air turn red. Consider what it would take to feel released—there it is, freedom like an ever-entwined knot in the sky. Consider what it would take to feel free—there it is, release like an unraveling knot.” - ISABELLE JIA

Being born Asian American, I have always struggled with my identity and was unsure which side of the spectrum I leaned toward the most. As a child, I have always been seen as the odd one out, a yellow dot amongst the white and brown mixture. I was usually either one of the only Asian kids in each of my classes, or was one of the few. I have always been picked on for my skin color and having smaller eyes, which caused me to be insecure. It was hard for me to adapt to this environment especially with having immigrant parents, who werenâ&#x20AC;&#x2122;t able to help me with school and such. Nevertheless, as time went on, I was able to embrace my unique features and show people that it is amazing to be different. I am Chinese-American and I am proud.

EXPOSURE was made to capture and appreciate various features of Asian people. Itâ&#x20AC;&#x2122;s important for people to take responsibility for the society they live in; embracing and learning about cultures facilitate a respectful and respectable community. However, there is a fine line between acknowledging and discriminating. Being full Vietnamese, there are times Iâ&#x20AC;&#x2122;m deemed inferior in socioeconomic settings because -- more often than not -- media assign Asian people submissive, weak roles. With certain exceptions like Mulan and Jackie Chan, there needs to be more representation of Asian people in mass media. EXPOSURE was my way to contribute. Because being Asian to me is different from the roles Western culture imposes on my people. My culture represents power, strength, humility, and family. EXPOSURE was a project for me to express my fierceness and beauty, with fellow models that all look different and beautiful. Each individual is beautifully different and I think differences should be celebrated more. #EXPOSURE19.

I am strong I am powerful I am smart I am funny I am Asian. - JONATHAN LAM

I grew up in Hawaii where being Asian automatically made you part of the majority. Being surrounded by people of the same ethnic background allowed me to shamelessly embrace my culture and share it with the people in my life. Nevertheless, when I was younger, I was often teased about how dark skinned I am. Boys told me they didn’t like me because I was too dark and called me names. For a while, it made me insecure about the color of my skin. Today, I embrace my skin color as a symbol of my mixed ethnic background which is increasingly rare on the ‘mainland.’ Brown is beautiful, and I wouldn’t want to be any other way. - KELLI SANTOS

Know Herself The Spanish tried to colonize, it forced my people to rise. We kicked they ass out, Magellan to his great demise. I descend from warriors of the sun, the oppressors wish they won. However, they took my native tongue. My ancestors spilled blood with violence to escape oppression so I could live in the Bay, to use my pen for expression. I am a divinity dalaga. I represent the West. Light skin Filipina with a flat nose. Much love to my brown skin sisters you should love your skin. Itâ&#x20AC;&#x2122;s the oppressors that convinced you, melanin is a deadly sin. They taught us to hate ourselves and love they wealth. Donâ&#x20AC;&#x2122;t fall for the trap. Health is wealth. To all my Filipinas remember our wombs carry the blood and history of 7,000 islands. Remember our land was an original patriarchy, us womxn have the power to bring a man to his knees. Being Asian is just an umbrella term. Embrace your dark hair, almond eyes, and skin. Take the power back and claim your people. Your culture is rich. - ALYSSA MENDOZA 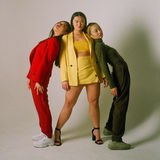