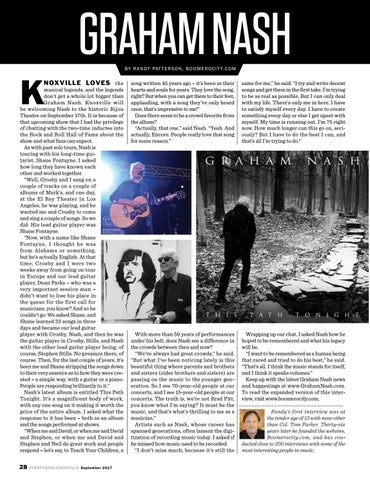 musical legends, and the legends don’t get a whole lot bigger than Graham Nash. Knoxville will be welcoming Nash to the historic Bijou Theatre on September 17th. It is because of that upcoming show that I had the privilege of chatting with the two-time inductee into the Rock and Roll Hall of Fame about the show and what fans can expect. As with past solo tours, Nash is touring with his long-time guitarist, Shane Fontayne. I asked how long they have known each other and worked together. “Well, Crosby and I sang on a couple of tracks on a couple of albums of Mark’s, and one day, at the El Rey Theater in Los Angeles, he was playing, and he wanted me and Crosby to come and sing a couple of songs. So we did. His lead guitar player was Shane Fontayne. “Now, with a name like Shane Fontayne, I thought he was from Alabama or something, but he’s actually English. At that time, Crosby and I were two weeks away from going on tour in Europe and our lead guitar player, Dean Parks – who was a very important session man – didn’t want to lose his place in the queue for the first call for musicians, you know? And so he couldn’t go. We asked Shane, and Shane learned 32 songs in three days and became our lead guitar player with Crosby, Nash, and then he was the guitar player in Crosby, Stills, and Nash with the other lead guitar player being, of course, Stephen Stills. No pressure there, of course. Then, for the last couple of years, it’s been me and Shane stripping the songs down to their very essence as to how they were created – a simple way, with a guitar or a piano. People are responding brilliantly to it.” Nash’s latest album is entitled This Path Tonight. It’s a magnificent body of work, with any one song on it making it worth the price of the entire album. I asked what the response to it has been – both as an album and the songs performed at shows. “When me and David, or when me and David and Stephen, or when me and David and Stephen and Neil do great work and people respond – let’s say, to Teach Your Children, a 28

song written 45 years ago – it’s been in their hearts and souls for years. They love the song, right? But when you can get them to their feet, applauding, with a song they’ve only heard once, that’s impressive to me!” Does there seem to be a crowd favorite from the album? “Actually, that one,” said Nash. “Yeah. And actually, Encore. People really love that song for some reason.”

same for me,” he said. “I try and write decent songs and get them in the first take. I’m trying to be as real as possible. But I can only deal with my life. There’s only me in here. I have to satisfy myself every day. I have to create something every day or else I get upset with myself. My time is running out. I’m 75 right now. How much longer can this go on, seriously? But I have to do the best I can, and that’s all I’m trying to do.”

With more than 50 years of performances under his belt, does Nash see a difference in the crowds between then and now? “We’ve always had great crowds,” he said. “But what I’ve been noticing lately is this beautiful thing where parents and brothers and sisters (older brothers and sisters) are passing on the music to the younger generation. So I see 70-year-old people at our concerts, and I see 15-year-old people at our concerts. The truth is, we’re not Brad Pitt, you know what I’m saying? It must be the music, and that’s what’s thrilling to me as a musician.” Artists such as Nash, whose career has spanned generations, often lament the digitization of recording music today. I asked if he missed how music used to be recorded. “I don’t miss much, because it’s still the

Wrapping up our chat, I asked Nash how he hoped to be remembered and what his legacy will be. “I want to be remembered as a human being that cared and tried to do his best,” he said. “That’s all. I think the music stands for itself, and I think it speaks volumes.” Keep up with the latest Graham Nash news and happenings at www.GrahamNash.com. To read the expanded version of this interview, visit www.boomerocity.com. Randy’s first interview was at the tender age of 13 with none other than Col. Tom Parker. Thirty-six years later he founded the webzine, Boomerocity.com, and has conducted close to 200 interviews with some of the most interesting people in music.