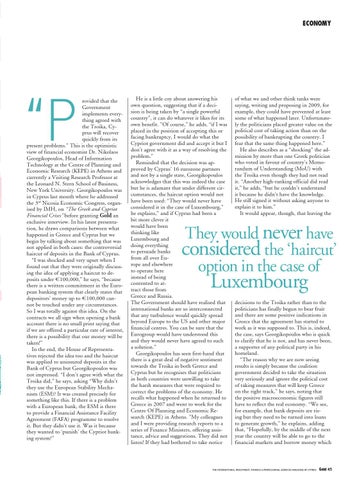 rovided that the Government implements everything agreed with the Troika, Cyprus will recover quickly from its present problems.” This is the optimistic view of financial economist Dr. Nikolaos Georgikopoulos, Head of Information Technology at the Centre of Planning and Economic Research (KEPE) in Athens and currently a Visiting Research Professor at the Leonard N. Stern School of Business, New York University. Georgikopoulos was in Cyprus last month where he addressed the 3rd Nicosia Economic Congress, organised by IMH, on “The Greek and Cypriot Financial Crises” before granting Gold an exclusive interview. In his latest presentation, he draws comparisons between what happened in Greece and Cyprus but we begin by talking about something that was not applied in both cases: the controversial haircut of deposits in the Bank of Cyprus. “I was shocked and very upset when I found out that they were originally discussing the idea of applying a haircut to deposits under €100,000,” he says, “because there is a written commitment in the European banking system that clearly states that depositors’ money up to €100,000 cannot be touched under any circumstances. So I was totally against this idea. On the contracts we all sign when opening a bank account there is no small print saying that if we are offered a particular rate of interest, there is a possibility that our money will be taken!” In the end, the House of Representatives rejected the idea too and the haircut was applied to uninsured deposits in the Bank of Cyprus but Georgikopoulos was not impressed. “I don’t agree with what the Troika did,” he says, asking “Why didn’t they use the European Stability Mechanism (ESM)? It was created precisely for something like this. If there is a problem with a European bank, the ESM is there to provide a Financial Assistance Facility Agreement (FAFA) programme to resolve it. But they didn’t use it. Was it because they wanted to ‘punish’ the Cypriot banking system?”

He is a little coy about answering his own question, suggesting that if a decision is being taken by “a single powerful country”, it can do whatever it likes for its own benefit. ”Of course,” he adds, “if I was placed in the position of accepting this or facing bankruptcy, I would do what the Cypriot government did and accept it but I don’t agree with it as a way of resolving the problem.” Reminded that the decision was approved by Cyprus’ 16 eurozone partners and not by a single state, Georgikopoulos acknowledges that this was indeed the case but he is adamant that under different circumstances, the haircut option would not have been used: “They would never have considered it in the case of Luxembourg,” he explains,” and if Cyprus had been a bit more clever it would have been thinking like Luxembourg and doing everything to persuade banks from all over Europe and elsewhere to operate here instead of being contented to attract those from Greece and Russia. The Government should have realised that international banks are so interconnected that any turbulence would quickly spread beyond Europe to the US and other major financial centres. You can be sure that the Eurogroup would have understood this and they would never have agreed to such a solution.” Georgikopoulos has seen first-hand that there is a great deal of negative sentiment towards the Troika in both Greece and Cyprus but he recognises that politicians in both countries were unwilling to take the harsh measures that were required to correct the problems of the economy. He recalls what happened when he returned to Greece in 2007 and went to work for the Centre Of Planning and Economic Research (KEPE) in Athens. ”My colleagues and I were providing research reports to a series of Finance Ministers, offering assistance, advice and suggestions. They did not listen! If they had bothered to take notice

of what we and other think tanks were saying, writing and proposing in 2009, for example, they could have prevented at least some of what happened later. Unfortunately the politicians placed greater value on the political cost of taking action than on the possibility of bankrupting the country. I fear that the same thing happened here.” He also describes as a “shocking” the admission by more than one Greek politician who voted in favour of country’s Memorandum of Understanding (MoU) with the Troika even though they had not read it. “Another high-ranking official did read it,” he adds, “but he couldn’t understand it because he didn’t have the knowledge. He still signed it without asking anyone to explain it to him.” It would appear, though, that leaving the

decisions to the Troika rather than to the politicians has finally begun to bear fruit and there are some positive indications in Greece that the agreement has started to work as it was supposed to. This is, indeed, the case, says Georgikopoulos who is quick to clarify that he is not, and has never been, a supporter of any political party in his homeland. “The reason why we are now seeing results is simply because the coalition government decided to take the situation very seriously and ignore the political cost of taking measures that will keep Greece on the right track,” he says, noting that the positive macroeconomic figures still have to reflect the real economy. “We see, for example, that bank deposits are rising but they need to be turned into loans to generate growth,” he explains, adding that, “Hopefully, by the middle of the next year the country will be able to go to the financial markets and borrow money which