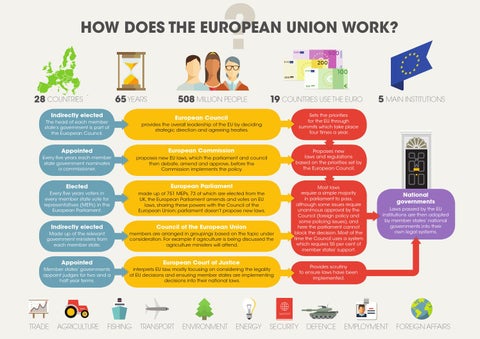 HOW DOES THE EUROPEAN UNION WORK?

19 COUNTRIES USE THE EURO Sets the priorities for the EU through summits which take place four times a year.

The head of each member state’s government is part of the European Council.

provides the overall leadership of the EU by deciding strategic direction and agreeing treaties.

Every five years each member state government nominates a commissioner.

proposes new EU laws, which the parliament and council then debate, amend and approve, before the Commission implements the policy.

Every five years voters in every member state vote for representatives (MEPs) in the European Parliament.

made up of 751 MEPs, 73 of which are elected from the UK, the European Parliament amends and votes on EU laws, sharing these powers with the Council of the European Union; parliament doesn’t propose new laws.

Proposes new laws and regulations based on the priorities set by the European Council.

Council of the European Union

Made up of the relevant government ministers from each member state.

members are arranged in groupings based on the topic under consideration. For example if agriculture is being discussed the agriculture ministers will attend.

Member states’ governments appoint judges for two and a half year terms.

interprets EU law, mostly focusing on considering the legality of EU decisions and ensuring member states are implementing decisions into their national laws.

Most laws require a simple majority in parliament to pass, although some issues require unanimous approval by the Council (foreign policy and some policing issues), and here the parliament cannot block the decision. Most of the time the Council uses a system which requires 55 per cent of member states’ support.

Provides scrutiny to ensure laws have been implemented. 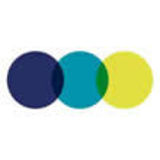 How does the European Union Work? | idea May/June 2016

How does the European Union Work? | idea May/June 2016