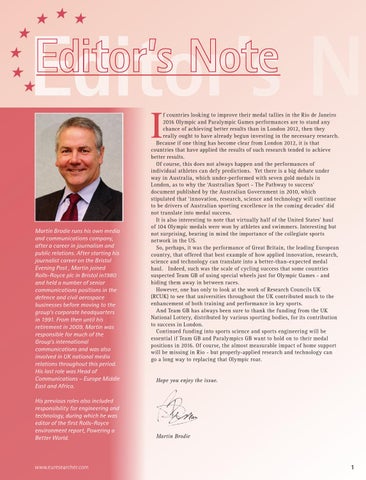 Editor’s No I Martin Brodie runs his own media and communications company, after a career in journalism and public relations. After starting his journalist career on the Bristol Evening Post , Martin joined Rolls-Royce plc in Bristol in1980 and held a number of senior communications positions in the defence and civil aerospace businesses before moving to the group’s corporate headquarters in 1991. From then until his retirement in 2009, Martin was responsible for much of the Group’s international communications and was also involved in UK national media relations throughout this period. His last role was Head of Communications – Europe Middle East and Africa. His previous roles also included responsibility for engineering and technology, during which he was editor of the first Rolls-Royce environment report, Powering a Better World.

f countries looking to improve their medal tallies in the Rio de Janeiro 2016 Olympic and Paralympic Games performances are to stand any chance of achieving better results than in London 2012, then they really ought to have already begun investing in the necessary research. Because if one thing has become clear from London 2012, it is that countries that have applied the results of such research tended to achieve better results. Of course, this does not always happen and the performances of individual athletes can defy predictions. Yet there is a big debate under way in Australia, which under-performed with seven gold medals in London, as to why the ‘Australian Sport - The Pathway to success’ document published by the Australian Government in 2010, which stipulated that ‘innovation, research, science and technology will continue to be drivers of Australian sporting excellence in the coming decades’ did not translate into medal success. It is also interesting to note that virtually half of the United States’ haul of 104 Olympic medals were won by athletes and swimmers. Interesting but not surprising, bearing in mind the importance of the collegiate sports network in the US. So, perhaps, it was the performance of Great Britain, the leading European country, that offered that best example of how applied innovation, research, science and technology can translate into a better-than-expected medal haul. Indeed, such was the scale of cycling success that some countries suspected Team GB of using special wheels just for Olympic Games - and hiding them away in between races. However, one has only to look at the work of Research Councils UK (RCUK) to see that universities throughout the UK contributed much to the enhancement of both training and performance in key sports. And Team GB has always been sure to thank the funding from the UK National Lottery, distributed by various sporting bodies, for its contribution to success in London. Continued funding into sports science and sports engineering will be essential if Team GB and Paralympics GB want to hold on to their medal positions in 2016. Of course, the almost measurable impact of home support will be missing in Rio - but properly-applied research and technology can go a long way to replacing that Olympic roar. Hope you enjoy the issue.

Research Dissemination from around Europe is highlighted in our winter issue. You will find a combination of ambitious research projects, sc...

Research Dissemination from around Europe is highlighted in our winter issue. You will find a combination of ambitious research projects, sc...