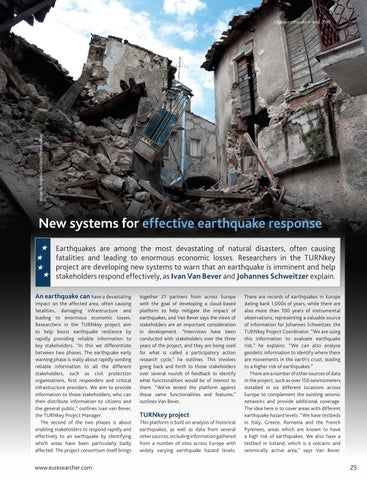 Image by Angelo Giordano from Pixabay

New systems for effective earthquake response Earthquakes are among the most devastating of natural disasters, often causing fatalities and leading to enormous economic losses. Researchers in the TURNkey project are developing new systems to warn that an earthquake is imminent and help stakeholders respond effectively, as Ivan Van Bever and Johannes Schweitzer explain. An earthquake can have a devastating impact on the affected area, often causing fatalities, damaging infrastructure and leading to enormous economic losses. Researchers in the TURNkey project aim to help boost earthquake resilience by rapidly providing reliable information to key stakeholders. “In this we differentiate between two phases. The earthquake early warning phase is really about rapidly sending reliable information to all the different stakeholders, such as civil protection organisations, first responders and critical infrastructure providers. We aim to provide information to those stakeholders, who can then distribute information to citizens and the general public,” outlines Ivan van Bever, the TURNkey Project Manager. The second of the two phases is about enabling stakeholders to respond rapidly and effectively to an earthquake by identifying which areas have been particularly badly affected. The project consortium itself brings

together 21 partners from across Europe with the goal of developing a cloud-based platform to help mitigate the impact of earthquakes, and Van Bever says the views of stakeholders are an important consideration in development. “Interviews have been conducted with stakeholders over the three years of the project, and they are being used for what is called a participatory action research cycle,” he outlines. This involves going back and forth to those stakeholders over several rounds of feedback to identify what functionalities would be of interest to them. “We’ve tested the platform against those same functionalities and features,” outlines Van Bever.

TURNkey project This platform is built on analysis of historical earthquakes, as well as data from several other sources, including information gathered from a number of sites across Europe with widely varying earthquake hazard levels.

There are records of earthquakes in Europe dating back 1,000s of years, while there are also more than 100 years of instrumental observations, representing a valuable source of information for Johannes Schweitzer, the TURNkey Project Coordinator. “We are using this information to evaluate earthquake risk,” he explains. “We can also analyse geodetic information to identify where there are movements in the earth’s crust, leading to a higher risk of earthquakes.” There are a number of other sources of data in the project, such as over 150 seismometers installed in six different locations across Europe to complement the existing seismic networks and provide additional coverage. The idea here is to cover areas with different earthquake hazard levels. “We have testbeds in Italy, Greece, Romania and the French Pyrenees, areas which are known to have a high risk of earthquakes. We also have a testbed in Iceland, which is a volcanic and seismically active area,” says Van Bever.

Another testbed is located in a region of the Netherlands where there is no natural seismicity, but rather the seismicity is induced by gas exploitation. “This is a huge on-shore gas field near Groningen. This gas field has been exploited for about 50 years, which has led to some seismic activity,” outlines Van Bever. Researchers aim to use data from these different sources to develop a platform which can provide prior warning of the most destructive seismic waves to stakeholders, who can then take the appropriate action. A lot of attention in research is focused on optimising various different algorithms to identify the location of the source of seismic waves and accurately forecast the degree of shaking they cause, now the objective is to bring these various different strands of investigation together. “The aim of the project was really to try to put all this together at a European level, in a single platform, that can handle the different phases of an earthquake,” outlines Van Bever. There are eight different workpackages in the project, and a lot of effort has been devoted to effective coordination. “Our goal is to have a single product at the end,” stresses Schweitzer.

P-waves and S-waves This platform takes full account of the different types of waves that occur during an earthquake. One type of seismic wave radiated by an earthquake has relatively low amplitudes but travels relatively fast (P-waves – primary waves), while another type has larger amplitudes but travels slower (S-waves – secondary waves). “We try to use the available information to identify when a big wave is coming and provide an early warning. The P-waves come first, but the subsequent S-waves are usually the most destructive,” says Schweitzer. Both types of waves come from the same source, now researchers are analysing the relationship between them. “So if you first detect the P-waves, you can locate the event and estimate the magnitude. Then you can possibly send an alert, somewhere between 5-10 seconds before the wave reaches a specific area,” explains Van Bever An early warning on even this kind of timescale can help civil authorities to protect key infrastructure, and so it’s important to present information about seismic waves in a clear way. While researchers have explored using maps, the stakeholders are in general looking for something simpler. “With a sound or visual alarm, they can start sending out fire trucks from a depot, or people out into the field,” says Van Bever. The possibility of

The map shows the seismic hazard for Europe as estimated by the EC FP7-Project SHARE and the location of the six testbeds of the TURNkey project.

TURNkey is a European research and innovation project that is working towards more earthquake resilient societies. The focus of TURNkey during the three-year project period is to assist stakeholders in different risk mitigation actions before, during, and after a damaging earthquake. To achieve this, TURNkey brings together a strong multidisciplinary team of experts from 21 partner institutions covering 10 EU countries.

Project Funding aftershocks is also a major consideration in conducting rescue and recovery missions after an earthquake, an issue researchers in the project are addressing. “There are some mathematical models to describe how aftershocks become smaller over time. We are using these models in TURNkey to warn people working in rescue and recovery about

This project has received funding from the European Union’s Horizon 2020 research and innovation programme under grant agreement No 821046.

algorithm to perform a particular function, it’s relatively easy to exchange it for the existing algorithm,” explains Schweitzer. The system overall brings together many different elements which have been developed over recent decades, alongside some ground-breaking new technologies. “Some very new methodologies have been developed during the project, such

warning phase is really about rapidly sending reliable information to all the different stakeholders, such as civil protection organisations, first responders and critical infrastructure providers. when they need to be particularly careful,” outlines Schweitzer. A final meeting is planned for April this year at which the project’s research will be presented to stakeholders, giving them an opportunity to learn about the TURNkey system and what it can do. The system itself has been built in a highly modular way, so that it’s relatively easy to update. “If there is a new, highly effective

as the new generation decision support system, based on a new methodology using multicriteria analysis. This supports stakeholders in taking decisions,” says Van Bever. This is just one of the methodologies that is planned for implementation in the platform, which is designed to provide early warning of an earthquake and also help stakeholders deal with the aftermath. While a lot of progress has

Photograph from the TURNkey Project Kick-off meeting in 2019.

Ivan Van Bever has a MSc in Geology from ENSG (Ecole Nationale Superieure de Geologie). After graduating in 2012 he moved to Norway and worked as a geoscientist with seismic data analysis and modeling for the offshore industry before joining NORSAR as Project Manager for the TURNkey project.

been made the platform is not yet ready for practical application, with Van Bever saying the aim is to reach technology readiness level (TRL) 5 or 6 by the end of the project. “It wouldn’t be software that could be sold to businesses, institutions or other stakeholders. But it should be a functioning prototype that we can demonstrate,” he outlines. This prototype will be demonstrated to stakeholders at the planned final meeting. “We will run through the scenario of an earthquake and show how we can detect it with our instruments. Then we will show how it sends a warning, and the information sent to first responders out in the field,” says Van Bever.

Further research will be required to develop a product that can be applied in the practical context, and both Van Bever and Schweitzer are keen to explore the possibility of a successor project. It is not possible to iron out every glitch within the limited timeframe of the TURNkey project, so the focus is more on developing a functioning prototype, which would represent solid foundations for further research. “We can show in principle that the system works in the project, but more work is required to really get it ready for actual application,” says Schweitzer.

Researchers in the TURNkey project are developing new systems to warn that an earthquake is imminent and help stakeholders respond effectively, as Ivan Van Bever and Johannes Schweitzer explain.