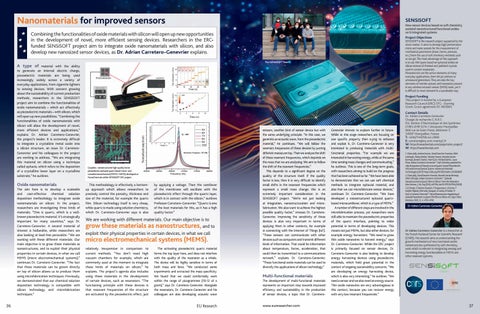 Oxide nanomaterials The aim here is to develop a scaleable and cost-effective chemical solution deposition methodology to integrate oxide nanomaterials on silicon. In the project, researchers are investigating three kinds of materials. “One is quartz, which is a wellknown piezoelectric material. It’s strategically important for many countries,” says Dr. Carretero-Genevrier. A second material of interest is hollandite, while researchers are also looking at lead-free perovskite. “We are working with these different materials. Our main objective is to grow these materials as nanostructures, and to exploit their physical properties in certain devices, in what we call MEMS (micro electromechanical systems),” continues Dr. Carretero-Genevrier. “The fact that these materials can be grown directly on top of silicon allows us to produce them using microfabrication techniques. Previously, we demonstrated that our chemical solution deposition technology is compatible with silicon technology and microfabrication techniques.”

SENSiSOFT is the research project supported by the stock market. It aims to develop high performance micro and nano sensors for the measurement of mechanical parameters (mass, forces, pressure, etc.) from the use of soft chemistry methods such as sol-gel. The main advantage of this approach is to use thin layers based on epitaxial oxides on silicon instead of thinned and polished crystals used in current resonators. Piezoelectrics are the active elements of many everyday applications, from ink-jet printers to ultrasound generators. They are also the key elements of motion sensors and resonators present in any wireless network sensor (WNS) node, yet it is difficult to meet demand in a sustainable way.

material with the ability to generate an internal electric charge, piezoelectric materials are being used increasingly widely across a variety of everyday applications, from cigarette lighters to sensing devices. With concern growing about the sustainability of current production methods, researchers in the SENSiSOFT project aim to combine the functionalities of oxide nanomaterials – which act effectively as piezoelectric materials – with silicon, which will open up new possibilities. “Combining the functionalities of oxide nanomaterials with silicon will allow the development of novel, more efficient devices and applications,” explains Dr. Adrian Carretero-Genevrier, the project’s leader. It is extremely difficult to integrate a crystalline metal oxide into a silicon structure, an issue Dr. CarreteroGenevrier and his colleagues in the project are working to address. “We are integrating this material on silicon using a technique called epitaxis, which refers to the deposition of a crystalline lower layer on a crystalline substrate,” he outlines.

This methodology is effectively a bottomup approach which allows researchers to precisely control the porosity, thickness and size of the material, for example the quartz film. Silicon technology itself is very cheap, while quartz is made using solution chemistry, which Dr. Carretero-Genevrier says is also

by applying a voltage. Then the cantilever of the membrane will oscillate with the piezoelectric effect through the quartz layer, which is in contact with the silicon,” outlines Professor Carretero-Genevrier. “Quartz is one of the best materials for this, as it has a high quality factor.”

We are working with different materials. Our main objective is to grow these materials as nanostructures, and to exploit their physical properties in certain devices, in what we call

micro electromechanical systems (MEMS). relatively inexpensive in comparison to current methods. “You don’t need high vacuum chambers for example, which are commonly used at the moment to integrate these kinds of materials on silicon,” he explains. The project’s agenda also includes using these materials in the development of certain devices, such as resonators. “The functioning principle with these devices is that resonant frequencies of the structure are activated by the piezoelectric effect, just

The activating piezoelectric quartz material forms the top layer here, and does not interfere with the quality of the resonator as a whole. The device will be highly sensitive in terms of both mass and force. “We conducted some experiments and extracted the mass specificity. We found that we could comfortably work within the range of picogrammes (10-12 of a gram),” says Dr. Carretero-Genevrier. Alongside the resonators, Dr. Carretero-Genevrier and his colleagues are also developing acoustic wave

sensors, another kind of sensor device but with the same underlying principle. “In this case, we generate an acoustic wave, from the piezoelectric material,” he continues. “We will follow the resonant frequencies of these devices by putting different masses on top. Then we analyse the shift of these resonant frequencies, which depends on the mass that we are analysing. We aim to follow the shift of the resonant frequencies.” This depends to a significant degree on the quality of the structure itself. If the quality factor is low, then it is very difficult to identify small shifts in the resonant frequencies which represent a small mass change; this is an extremely important consideration in the SENSiSOFT project. “We’re not just looking at integration, nanostructuration and microfabrication. We also want to achieve the highest possible quality factor,” stresses Dr. CarreteroGenevrier. Improving the sensitivity of these devices is also very important in terms of applying them in other contexts, for example in connecting with the Internet of Things (IoT). “These sensors can communicate with other devices such as computers and transmit different kinds of information. That could be information about temperature, forces, acceleration, that could then be transmitted to a communications network,” explains Dr. Carretero-Genevrier. “These functional oxide materials can be used to diversify the applications of silicon technology.”

Genevrier intends to explore further in future. While at this stage researchers are focusing on one specific property then trying to enhance and exploit it, Dr. Carretero-Genevrier is very interested in producing materials with multifunctional properties. “For example we are interested in harvesting energy, while at the same time sensing mass changes and communicating,” he outlines. This is one of the long-term goals, with researchers aiming to build on the progress that has been achieved so far. “We have been able to demonstrate that we can use soft chemical methods to integrate epitaxial material, and also that we can microfabricate sensor devices,” continues Dr. Carretero-Genevrier. “We have developed a nanostructured epitaxial quartzbased microcantilever, which is a type of MEMs.” A number of different steps are involved in the microfabrication process, yet researchers were still able to maintain the piezoelectric properties of the quartz interface, pointing to wider potential in terms of developing devices. This means not just MEMs, but also other devices, for example energy harvesters. “We need to grow thin oxide nanowires to harvest energy,” says Dr. Carretero-Genevrier. While the ERC project is primarily focused on sensor devices, Dr. Carretero-Genevrier is also looking to develop energy harvesting devices using piezoelectric materials, which hold great potential in the context of ongoing sustainability concerns. “We are developing an energy harvesting device, which is also very interesting,” he outlines. “We need a sensor and we also need an energy source. Thin oxide nanowires are very advantageous in this context, because you can recover energy with very low resonant frequencies.”

Dr Adrien Carretero-Genevrier is a researcher at the French National Centre for Scientific Research (CNRS). His research aims at understanding the growth mechanisms of new functional oxides nanostructures synthesized by soft chemistry, work which is relevant to integrating sensing and harvesting energy functionalities in MEMS and other resonant systems.