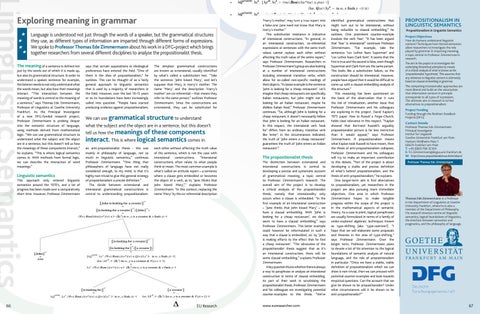 Exploring meaning in grammar Language is understood not just through the words of a speaker, but the grammatical structures they use, as different types of information are imparted through different forms of expressions. We spoke to Professor Thomas Ede Zimmermann about his work in a DFG-project which brings together researchers from several different disciplines to analyse the propositionalist thesis. The meaning of a sentence is defined not just by the words out of which it is made up, but also its grammatical structure. In order to understand a spoken sentence for example, the listener needs to not only understand what the words mean, but also how their meanings interact. “This interaction between the meaning of words is central to the meaning of a sentence,” says Thomas Ede Zimmermann, Professor of Linguistics at Goethe University Frankfurt. As the Principal Investigator of a new DFG-funded research project, Professor Zimmermann is probing deeper into the semantic structure of language, using methods derived from mathematical logic. “We can use grammatical structure to understand what the subject and the object are in a sentence, but this doesn’t tell us how the meanings of these components interact,” he explains. “This is where logical semantics comes in. With methods from formal logic, we can describe the interaction of word meanings.” Linguistic semantics This approach only entered linguistic semantics around the 1970’s, and a lot of progress has been made over a comparatively short time. However, Professor Zimmermann

says that certain suppositions or ideological preferences have entered the field. “One of them is the idea of propositionalism,” he outlines. This can be thought of as a fairly general approach to linguistic semantics that is used by a majority of researchers in the field. However, over the last 10-15 years or so its foundations have been increasingly called into question. “People have started producing evidence against propositionalism,

The simplest grammatical constructions are known as extensional, usually identified by what’s called a substitution test. “Take the sentence ‘John kissed Mary’, and let’s suppose that Mary is Harry’s mother. The name ‘Mary’ and the description ‘Harry’s mother’ are co-referential – that means they refer to the same person,” outlines Professor Zimmermann. Since the constructions are extensional, they can be substituted for

We can use grammatical structure to understand what the subject and the object are in a sentence, but this doesn’t tell us how the meanings of these components interact. This is where logical semantics comes in. an anti-propositionalist thesis - this was mainly in philosophy of language, not so much in linguistic semantics,” continues Professor Zimmermann. “One thing that philosophers of language have not really considered enough, to my mind, is that it’s highly non-trivial to give this general strategy of propositionalism a precise definition.” The divide between extensional and intensional grammatical constructions is central to understanding propositionalism.

each other without affecting the truth value of the sentence, which is not the case with intensional constructions. “Intensional constructions often relate to what people think or mean. The most common example is what’s called an attitude report – a sentence where a clause gets embedded or becomes the object of a verb, as in; ‘Jane thinks that John kissed Mary’,” explains Professor Zimmermann. “In this context, replacing the name ‘Mary’ by the co-referential description

identified grammatical constructions that might turn out to be intensional, without being reducible to clausal embedding,” he outlines. One prominent counter-example involves the verb ‘fear’. “It has been argued that ‘fear’ is intensional” continues Professor Zimmermann. “For example, take the sentences ‘Lex Luthor fears Superman’ and ‘Lex Luthor fears Clark Kent’. It seems that the first is true and the second is false, even though Superman and Clark Kent are the same person. This looks like a substitution failure, so the construction should be intensional. However, people have argued that it would be difficult to come up with a clausal embedding analysis of this structure.” This reasoning has been questioned on the basis of the observation that it runs the risk of trivialisation, another issue that Professor Zimmermann and his colleagues are exploring in the project. David Kaplan’s 1975 paper How to Russell a Frege-Church, holds clear relevance in this respect. “Kaplan showed that Bertrand Russell’s arguably propositionalist picture is far less restrictive than it would appear,” says Professor Zimmermann. If propositionalism means what Kaplan took Russell to have meant, then the thesis of anti-propositionalism collapses; Professor Zimmermann and his colleagues will try to make an important contribution to this debate. “Part of the project is about developing a stable and precise definition of what’s behind propositionalism, and the thesis of anti-propositionalism,” he explains. One longer-term aim is find alternatives to propositionalism, yet researchers in the project are also pursuing more immediate objectives. One area in which Professor Zimmermann hopes to make tangible progress within the scope of the project is in the mathematical aspects of semantic theory. As a case in point, logical paraphrases are usually formulated in terms of a family of under-explored algebraic techniques known as type-shifting [aka ‘type-coercion’]. “I hope that we will elaborate some proposals and theories in the area of type-shifting,” says Professor Zimmermann. Over the longer term, Professor Zimmermann plans to devote a lot of his attention to the logical foundations of semantic analysis of natural language, and the role of propositionalism in particular. “Once we have a stable, viable definition of propositionalism which we can show is non-trivial, then we can proceed with potential counter-examples and look towards empirical questions. Can the account that we give be shown to be propositionalist? Under what circumstances will it be shown to be anti-propositionalist?”

How do humans understand linguistic content? Techniques from formal semantics allow researchers to investigate the role played by grammar in imparting meaning, a topic central to Professor Zimmermann’s research. The aim in the project is to investigate the underlying theoretical principles by means of a critical analysis of what is known as the ‘propositionalist hypothesis’. This assumes that any reference to linguistic content is ultimately based on clausal embedding in grammar. The competing intensionalist approaches are more liberal and build on the assumption that information content in principle corresponds to all types of expression. The ultimate aim in research is to find alternatives to propositionalism.

Thomas Ede Zimmermann is a Professor in the Department of Linguistics at Goethe University Frankfurt, where he is also a member of the Department of Philosophy. His research interests centre on linguistic semantics, logical foundations of linguistics, the interface between semantics and pragmatics, and the philosophy of language.

Language is understood not just through the words of a speaker, but the grammatical structures they use. Professor Thomas Ede Zimmermann is probing deeper into the semantic structure of language, using methods derived from mathematical logic