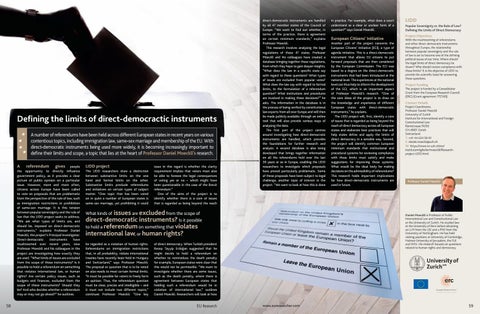 Defining the limits of direct-democractic instruments A number of referendums have been held across different European states in recent years on various contentious topics, including immigration law, same-sex marriage and membership of the EU. With direct-democratic instruments being used more widely, it is becoming increasingly important to define their limits and scope, a topic that lies at the heart of Professor Daniel Moeckli’s research. A

referendum gives people the opportunity to directly influence government policy, as it provides a clear picture of public opinion on a particular issue. However, more and more often, citizens across Europe have been called to vote on proposals that are problematic from the perspective of the rule of law, such as immigration restrictions or prohibition of same-sex marriage. It is this tension between popular sovereignty and the rule of law that the LIDD project seeks to address. “We ask what types of limits are, and should be, imposed on direct-democratic instruments,” explains Professor Daniel Moeckli, the project’s Principal Investigator. Direct-democratic instruments have mushroomed over recent years, now Professor Moeckli and his colleagues in the project are investigating how exactly they are used. “What kinds of issues are excluded from the scope of those instruments? Is it possible to hold a referendum on something that violates international law, or human rights? Are certain policy issues, such as budgets and finances, excluded from the scope of these instruments? Should they be? And who decides whether a referendum may or may not go ahead?” he outlines.

LIDD project The LIDD researchers draw a distinction between substantive limits on the one hand and formal limits on the other. Substantive limits preclude referendums and initiatives on certain types of subject matter. “One topic that has been voted on in quite a number of European states is same-sex marriage, yet prohibiting it could

issue in this regard is whether the clarity requirement implies that voters must also be able to foresee the legal consequences of voting yes or no – which might have been questionable in the case of the Brexit referendum.” One of the aims of the project is to identify whether there is a core of issues that is regarded as being beyond the reach

direct-democratic instruments are handled by all 47 member states of the Council of Europe. “We want to find out whether, in terms of the practice, there is agreement on certain minimum standards,” explains Professor Moeckli. This research involves analysing the legal regulations of these 47 states. Professor Moeckli and his colleagues have created a database bringing together these regulations, from which they hope to gain deeper insights. “What does the law in a specific state say with regard to these questions? What types of issues are excluded from popular votes? What does the law say with regard to formal limits, to the formulation of a referendum question? What institutions and procedures are involved in making these decisions?” he asks. The information in the database is in the process of being verified by constitutional law experts from all over Europe and will then be made publicly available through an online tool that will also provide various ways of analysing the data. The first part of the project centres around investigating how direct-democratic instruments are handled, which provides the foundations for further research and analysis. A second database is also being developed that brings together information on all the referendums held over the last 30 years or so in Europe, enabling the LIDD researchers to investigate which proposals have proved particularly problematic. Some of these proposals have been subject to legal challenge, another topic of interest in the project. “We want to look at how this is done

issues are excluded from the scope of direct-democratic instruments? Is it possible to hold a referendum on something that violates international law, or human rights? What kinds of

be regarded as a violation of human rights. Referendums on immigration restrictions that, in all probability, violate international treaties have recently been held in Hungary and Switzerland,” says Professor Moeckli. The proposal or question that is to be voted on also needs to meet certain formal limits. “It must be possible for voters to freely form an opinion. Thus, the referendum question must be clear, precise and intelligible – and it must not include two different topics,” continues Professor Moeckli. “One key

European Citizens’ Initiative Another part of the project concerns the European Citizens’ Initiative (ECI), a type of agenda initiative. This is a direct-democratic instrument that allows EU citizens to put forward proposals that are then considered by the European Commission. The ECI was based to a degree on the direct-democratic instruments that had been introduced at the national level. The experiences at the national level can thus help to inform the development of the ECI, which is an important aspect of Professor Moeckli’s research. “One of the core ideas of the project is to draw on the knowledge and experience of different European states with direct-democratic instruments,” he explains. The LIDD project will, first, identify a core of issues that is regarded as being beyond the reach of direct democracy across all European states and elaborate best practices that will help states define and apply the limits of direct democracy in a sensible way. Second, the project will identify common European minimum standards that institutional and procedural systems for reviewing compliance with these limits must satisfy and make suggestions for improving these systems: What would be the ideal body for making decisions on the admissibility of referendums? This research holds important implications for how direct-democratic instruments are used in future.

LIDD Popular Sovereignty vs. the Rule of Law? Defining the Limits of Direct Democracy Project Objectives

With the mushrooming of referendums and other direct-democratic instruments throughout Europe, the relationship between popular sovereignty and the rule of law is set to become one of the defining political issues of our time. Where should the legal limits of direct democracy be drawn? Who should review compliance with these limits? It is the objective of LIDD to provide the scientific basis for answering these questions.

The project is funded by a Consolidator Grant from the European Research Council (ERC) (Grant agreement 772160).

of direct democracy. When Turkish president Recep Tayyip Erdoğan suggested that he might decide to hold a referendum on whether to reintroduce the death penalty for example, European states were clear that this would not be permissible. “We want to investigate whether there are some issues, such as the death penalty, where there is agreement between European states that holding such a referendum would be in violation of international law,” outlines Daniel Moeckli. Researchers will look at how

in practice. For example, what does a court understand as a clear or unclear form of a question?” says Daniel Moeckli.

With direct-democratic instruments being used more widely across Europe, it is becoming increasingly important to define their limits and scope, a topic that lies at the heart of Professor Daniel Moeckli’s research