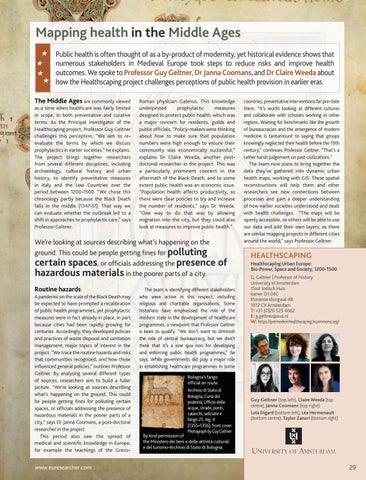 Mapping health in the Middle Ages Public health is often thought of as a by-product of modernity, yet historical evidence shows that numerous stakeholders in Medieval Europe took steps to reduce risks and improve health outcomes. We spoke to Professor Guy Geltner, Dr Janna Coomans, and Dr Claire Weeda about how the Healthscaping project challenges perceptions of public health provision in earlier eras. The Middle Ages are commonly viewed as a time when healthcare was fairly limited in scope, in both preventative and curative terms. As the Principal Investigator of the Healthscaping project, Professor Guy Geltner challenges this perception. “We aim to reevaluate the terms by which we discuss prophylactics in earlier societies,” he explains. The project brings together researchers from several different disciplines, including archaeology, cultural history and urban history, to identify preventative measures in Italy and the Low Countries over the period between 1200-1500. “We chose this chronology partly because the Black Death falls in the middle (1347-51). That way we can evaluate whether the outbreak led to a shift in approaches to prophylactic care,” says Professor Geltner.

Roman physician Galenus. This knowledge underpinned prophylactic measures designed to protect public health, which was a major concern for residents, guilds and public officials. “Policy-makers were thinking about how to make sure that population numbers were high enough to ensure their community was economically successful,” explains Dr Claire Weeda, another postdoctoral researcher in the project. This was a particularly prominent concern in the aftermath of the Black Death, and to some extent public health was an economic issue. “Population health affects productivity, so there were clear policies to try and increase the number of residents,” says Dr Weeda. “One way to do that was by allowing migration into the city, but they could also look at measures to improve public health.”

The team is identifying different stakeholders who were active in this respect, including religious and charitable organisations. Some historians have emphasised the role of the modern state in the development of healthcare programmes, a viewpoint that Professor Geltner is keen to qualify. “We don’t want to diminish the role of central bureaucracy, but we don’t think that it’s a sine qua non for developing and enforcing public health programmes,” he says. While governments did play a major role in establishing healthcare programmes in some

countries, preventative interventions far pre-date them. “It’s worth looking at different cultures and collaborate with scholars working in other regions. Waiting for benchmarks like the growth of bureaucracies and the emergence of modern medicine is tantamount to saying that groups knowingly neglected their health before the 19th century,” continues Professor Geltner. “That’s a rather harsh judgement on past civilizations.” The team now plans to bring together the data they’ve gathered into dynamic urban health maps, working with GIS. These spatial reconstructions will help them and other researchers see new connections between processes and gain a deeper understanding of how earlier societies understood and dealt with health challenges. “The maps will be openly accessible, so others will be able to use our data and add their own layers, as there are similar mapping projects in different cities around the world,” says Professor Geltner.