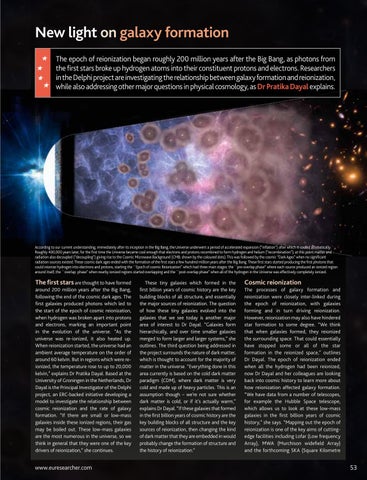 New light on galaxy formation The epoch of reionization began roughly 200 million years after the Big Bang, as photons from the first stars broke up hydrogen atoms into their constituent protons and electrons. Researchers in the Delphi project are investigating the relationship between galaxy formation and reionization, while also addressing other major questions in physical cosmology, as Dr Pratika Dayal explains.

According to our current understanding, immediately after its inception in the Big Bang, the Universe underwent a period of accelerated expansion (“inflation”) after which it cooled adiabatically. Roughly 400,000 years later, for the first time the Universe became cool enough that electrons and protons recombined to form hydrogen and helium (“recombination”); at this point matter and radiation also decoupled (“decoupling”) giving rise to the Cosmic Microwave Background (CMB; shown by the coloured dots). This was followed by the cosmic “Dark Ages” when no significant radiation sources existed. These cosmic dark ages ended with the formation of the first stars a few hundred million years after the Big Bang. These first stars started producing the first photons that could reionize hydrogen into electrons and protons, starting the &#96;&#96;Epoch of cosmic Reionization” which had three main stages: the &#96;&#96;pre-overlap phase” where each source produced an ionized region around itself, the &#96;&#96;overlap phase” when nearby ionized regions started overlapping and the &#96;&#96;post-overlap phase” when all of the hydrogen in the Universe was effectively completely ionized.

The first stars are thought to have formed around 200 million years after the Big Bang, following the end of the cosmic dark ages. The first galaxies produced photons which led to the start of the epoch of cosmic reionization, when hydrogen was broken apart into protons and electrons, marking an important point in the evolution of the universe. “As the universe was re-ionized, it also heated up. When reionization started, the universe had an ambient average temperature on the order of around 60 kelvin. But in regions which were reionized, the temperature rose to up to 20,000 kelvin,” explains Dr Pratika Dayal. Based at the University of Groningen in the Netherlands, Dr Dayal is the Principal Investigator of the Delphi project, an ERC-backed initiative developing a model to investigate the relationship between cosmic reionization and the rate of galaxy formation. “If there are small or low-mass galaxies inside these ionized regions, their gas may be boiled out. These low-mass galaxies are the most numerous in the universe, so we think in general that they were one of the key drivers of reionization,” she continues.

Cosmic reionization The processes of galaxy formation and reionization were closely inter-linked during the epoch of reionization, with galaxies forming and in turn driving reionization. However, reionization may also have hindered star formation to some degree. “We think that when galaxies formed, they reionized the surrounding space. That could essentially have stopped some or all of the star formation in the reionized space,” outlines Dr Dayal. The epoch of reionization ended when all the hydrogen had been reionized, now Dr Dayal and her colleagues are looking back into cosmic history to learn more about how reionization affected galaxy formation. “We have data from a number of telescopes, for example the Hubble Space telescope, which allows us to look at these low-mass galaxies in the first billion years of cosmic history,” she says. “Mapping out the epoch of reionization is one of the key aims of cuttingedge facilities including Lofar (Low frequency Array), MWA (Murchison widefield Array) and the forthcoming SKA (Square Kilometre

Array). All of these aim to map the presence, and evolution, of neutral hydrogen in the first billion years of cosmic history.” This work involves analysing the 21 centimetre emission, from which researchers can look to assess how much hydrogen was left neutral during that period, indicating the extent to which reionization had proceeded. The wavelength from the 21 centimetre emission enables scientists to identify the redshift – or the era – which this gas relates to, with Dr Dayal focusing on the epoch of reionization. “What we expect to see is that at the beginning of the epoch of reionization, all of the hydrogen should basically be neutral. So we should see this 21 centimetre emission from everywhere in the universe,” she outlines. However, this changes as galaxies start to ionize the surrounding hydrogen. “As galaxies ionize the surrounding hydrogen, we start to see little holes appearing in this 21 centimetre emission. These holes grow over time, until the 21 centimetre signal disappears,” explains Dr Dayal. “This data will come on-line over the next 5-7 years from the SKA, which is going to be built in South Africa and Australia.” The research community looking at this 21 centimetre signal from the epoch of reionization has historically been separate from that looking at galaxy formation. However, these two topics are actually quite closely

related says Dr Dayal, who is now looking to enable deeper collaboration. “We are trying to build a framework to relate the 21 centimetre emission to the underlying galaxy population,” she says. The project is making full use of the latest cosmological simulations to investigate the relationship between reionization and the rate of galaxy formation. “We need extremely large simulations for this, while we also need a very high resolution so that we can look at

A further important dimension of Dr Dayal’s work centres around investigating the nature of dark matter, which is thought to comprise around 80 percent of matter in the universe. The CDM framework has proved fairly accurate in predicting the large-scale structure of the universe, yet Dr Dayal says a number of problems become apparent at smaller scales, one of which is the so-called

As galaxies ionize the surrounding hydrogen, we start to see little holes appearing in this 21 centimetre emission. These holes grow over time, until the 21 centimetre signal disappears. the tiny galaxies which provided most of the photons for reionization,” continues Dr Dayal. “We’re running high resolution simulations, over a very large volume. The novel point about our approach is that we are combining dark matter simulations with galaxy formation models, which will be coupled with a full radiative transfer code which can actually follow the process of reionization. Dr. Anne Hutter, a postdoctoral fellow in the Delphi team, is the driving force behind this numerically intensive project.”

missing satellite problem. “In the CDM framework, dark matter can form structure over all scales. Conventionally, simulations of cold dark matter have predicted the presence of thousands of low-mass satellites of the milky way. But then when we go to look for these satellites, we find only around 20,” she explains. Changing the nature of dark matter itself could lead to new insights in this respect. “What if you change the kind of dark matter? What kind of constraints are current or future

The Square Kilometre Array (SKA) project is an international effort to build the world’s largest radio telescope, with eventually over a square kilometre of collecting area. Delphi aims at building a framework to combine galaxy data, obtained from facilities including the JWST and E-ELT, with the 21cm data that will be provided by the SKA to build a complete picture that links the progress of reionization to the underlying sources driving the process.

DELPHI: a framework to study Dark Matter and the emergence of galaxies in the epoch of reionization

To answer three crucial questions in Astrophysics and Cosmology: (i) how did the interlinked processes of galaxy formation and reionization drive each other?; (ii) what were the physical properties of early galaxies and how have they evolved through time to give rise to the galaxy properties we see today?; and (iii) what is the nature (mass) of the mysterious Dark Matter that makes up 80% of the matter content in the Universe?

H2020 ERC starting grant (agreement number 717001). Rendition of the ELT and its enclosing structure or dome. Here, it is shown with respect to the London Eye and the small dots on the ground next to the telescope are cars. You can see the overall structure will be huge – it will be about the same size as a football stadium! The 39-metre primary mirror of the ELT will consist of almost 800 hexagonal segments, each 1.4 metres wide, and only 50 mm thick.

observations able to give us?” asks Dr Dayal. “We’re carrying out a lot of calculations to link those properties to things that we can actually measure.” This could mean looking at the metallicity of galaxies, to take one example. Currently the metal content of galaxies can be mapped to a redshift of 3.5, covering roughly the last 2 billion years of cosmic history; the aim is to develop a model to provide a baseline against this. “We want to be able to ask; what was the metal content of early galaxies in different cosmologies? How did it evolve over time in different dark matter models? We’re trying to figure out the properties of early galaxies – and how they evolved into the systems which we can see at later times in a range of dark matter models,” outlines Dr Dayal. The model itself is being built up in steps, and although the project still has around three years to run, Dr Dayal says significant progress has already been made. “We have completed our dark matter simulation, it took a couple of months at the Leibnitz supercomputing facility in Munich. Now we’re coupling it with our galaxy formation model. We’ll then couple this fully and self-consistently with a semi-numerical reionization model developed by Dr. Hutter, before we carry out a full radiative transfer calculation for reionization,” she continues.

maximise the scientific value of the data that it generates. “We’re trying to relate the 21 centimetre signal that we get from neutral hydrogen with the underlying galaxy population. The question is; how can we optimise this co-relation with the SKA? Should we survey large patches of the sky with a low resolution, or should we survey small patches with a high resolution?” she outlines. Several other major observational facilities are currently under development, including the James Webb Telescope and the European Extremely Large Telescope (E-ELT); Dr Dayal aims to encourage collaboration between them. “We are trying to combine these different data sets and get these different facilities talking to each other. From this, we can then look to work out whether it is best to have synergy between the SKA and the E-ELT or JWST for example, or say the SKA and the existing Subaru telescope,” she outlines.

Dr Pratika Dayal is an Assistant Professor and Rosalind Franklin Fellow at the Kapteyn Astronomical Institute, part of Groningen University. She gained an ERC starting grant laureate in 2016, and was awarded the 2017 Young scientist Medal in Astrophysics by the International Union of Pure and Applied Physics.

Square Kilometre Array The results of this work could also help inform the operation of future observational facilities, such as the SKA. As co-lead of the SKA epoch of reionization synergy group, Dr Dayal aims to help

Artist view of the JWST which will be located at the Lagrange point L2, at 1.5 millions km from the Earth in the opposite direction to the Sun, the JWST will allow to probe the very young Universe. (Credit : NASA/ESA)