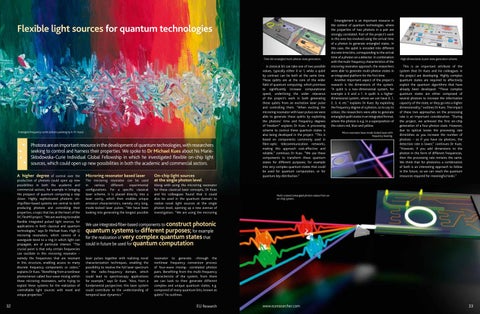 Photons are an important resource in the development of quantum technologies, with researchers seeking to control and harness their properties. We spoke to Dr Michael Kues about his MarieSkłodowska-Curie Individual Global Fellowship in which he investigated flexible on-chip light sources, which could open up new possibilities in both the academic and commercial sectors. A higher degree

of control over the production of photons could open up new possibilities in both the academic and commercial sectors, for example in bringing the prospect of quantum computing a step closer. Highly sophisticated photonic onchip/fiber-based systems are central to both producing photons and controlling their properties, a topic that lies at the heart of the DC FlexMil project. “We are working to enable flexible integrated pulsed light sources, for applications in both classical and quantum technologies,” says Dr Michael Kues. High-Q microring resonators, which consist of a waveguide bend to a ring in which light can propagate, are of particular interest. “The crucial point is that only certain frequencies can oscillate in this microring resonator – namely the frequencies that are resonant in this structure, enabling access to many discrete frequency components or colors,” explains Dr Kues. “Benefiting from a nonlinear phenomenon called four-wave mixing within these microring resonators, we’re trying to exploit these systems for the realization of controllable light sources with novel and unique properties.”

Microring resonator based laser The microring resonator can be used in various different experimental configurations. For a specific classical laser scheme, it is placed directly into a laser cavity, which then enables unique emission characteristics, namely very long, mode-locked laser pulses. “We have been looking into generating the longest possible

A classical bit can take one of two possible values, typically either 0 or 1, while a qubit by contrast can be both at the same time. These qubits are at the core of the wider field of quantum computing, which promises to significantly increase computational speed, underlining the wider relevance of the project’s work in both generating these qubits from an excitation laser pulse and controlling them. “When exciting the microring resonator with laser pulses we were able to generate these qubits by exploiting the photons’ time and frequency degrees of freedom” explains Dr Kues. A processing scheme to control these quantum states is also being developed in the project. “This is based on components commonly used in fibre-optic telecommunication networks, making this approach cost-effective and reliable,” continues Dr Kues. “We use these components to transform these quantum states for different purposes; for example into very complex quantum states that could be used for quantum computation, or for quantum key distribution.”

Entanglement is an important resource in the context of quantum technologies, where the properties of two photons in a pair are strongly correlated. Part of the project’s work in this area has involved using the arrival time of a photon to generate entangled states. In this case, the qubit is encoded into different discrete time bins, corresponding to the arrival time of a photon on a detector. In combination with the multi-frequency characteristics of the microring resonator approach, the researchers were able to generate multi-photon states in an integrated platform for the first time. Another important aspect of the project’s research is the dimensions of the system. “A qubit is a two-dimensional system, for example a 0 and a 1. A qudit is a higherdimensional system, where we can have 0, 1, 2, 3, 4, etc.” explains Dr Kues. By exploiting the frequency degree of a photon, so to say its colour, the researchers were able to generate entangled qudit states in an integrated format, where the photon is e.g. in a superposition of the colors red, blue and yellow. Micro-resonator base mode-locked laser with frequency beating.

This is an important attribute of the system that Dr Kues and his colleagues in the project are developing. Highly complex quantum states are required to effectively exploit the quantum algorithms that have already been developed. “These complex quantum states are either composed of several photons to increase the information capacity of the state, or they go into a higher dimensionality,” outlines Dr Kues. The impact of these two approaches on the processing rate is an important consideration. “During the project, we achieved the first on-chip generation of a four-photon state. However, due to optical losses the processing rate diminishes as you increase the number of photons – so if you have six photons, the detection rate is lower,” continues Dr Kues. “However, if you add dimensions to the photon in the form of different frequencies, then the processing rate remains the same. We think that for photonics a combination of both is an interesting approach to follow in the future, so we can reach the quantum resources required for meaningful tasks.”

We use integrated/fiber-based components to construct photonic quantum systems for different purposes; for example for the realization of very complex quantum states that could in future be used for quantum computation laser pulses together with realizing novel characterization techniques, enabling the possibility to resolve the full laser spectrum in the radio-frequency domain, which could lead to spectroscopy applications for example,” says Dr Kues. “Also, from a fundamental perspective, this laser system could contribute to the understanding of temporal laser dynamics.”

resonator to generate –through the nonlinear frequency conversion process of four-wave mixing– correlated photon pairs. Benefiting from the multi-frequency characteristic of the system, from there we can look to then generate different complex and unique quantum states, e.g. composed of many quantum bits, known as qubits” he outlines.

DC FlexMIL is an individual global fellowship research action focusing on the development and control of novel integrated classical and non-classical light sources for applications in e.g. metrology and quantum technologies. It merges fundamental scientific investigations with recent advances in integrated photonics and fiber-based telecommunications technology to reach its goals.

The project received funding from the European Union’s Horizon 2020 Research and Innovation programme under the Marie SklodowskaCurie grant agreement number 656607.

Dr Michael Kues is conducting research on broad and interdisciplinary range of topics at the intersection of photonics and quantum science. In his current research, he focuses on the development and realization of compact on-chip optical quantum systems, and studies new and scalable optical approaches for present and future practical quantum information processing.

Researchers are not only looking into the generation of these quantum states in the project, but also how this can be achieved efficiently, through a small, practical and easily controllable system. Usually fairly large and complex systems are required, involving expensive optical free-space setups; Dr Kues and his colleagues in the project looked at an alternative approach. “Our approach is to miniaturise this and integrate it, making it easier to set up and use,” he says. The microring resonator is integrated on a chip, so it is more practical to use than previous systems. “We aim to slim it down, so that you can put these integrated light sources in a small box, instead of relying on large optical free space systems. This means it could not only be used in a special laboratory environment, but in out-of-lab scenarios,” continues Dr Kues. “We will continue working on this in future, to look into further miniaturising this, with the final goal of having the whole system integrated on a chip.” The project’s research could hold important implications for the future of quantum computing, as well as metrology,

telecommunications, spectroscopy and several other areas. The project itself recently concluded yet there is still scope for further research, and in future Dr Kues and his colleagues plan to explore the potential of these systems with respect to certain applications. “This could include sensing applications, for example,” he says. “The EU has established the Quantum Flagship to support continued investigation and help translate research into commercial development, which could propel this research further.” This type of research is very much collaborative in nature, and scientists from all over the world have made important contributions. As the recipient of this individual fellowship, Dr Kues has benefitted from the opportunity to spend time at INRS-EMT in Canada and University of Glasgow in UK, and the opportunity to share knowledge and ideas with international colleagues was central to the achievements of the project. “This research has been undertaken in a large collaboration, together with a core team at INRS-EMT, Canada and other places, who made important contributions to this work,” he stresses.