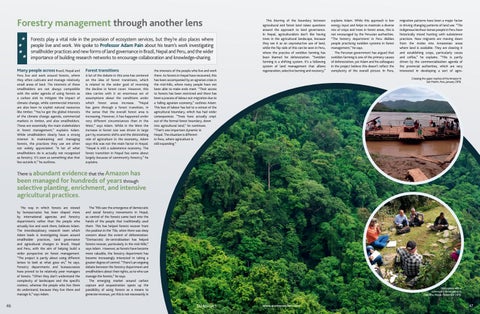 Forestry management through another lens Forests play a vital role in the provision of ecosystem services, but they’re also places where people live and work. We spoke to Professor Adam Pain about his team’s work investigating smallholder practices and new forms of land governance in Brazil, Nepal and Peru, and the wider importance of building research networks to encourage collaboration and knowledge-sharing. Many people across Brazil, Nepal and

Peru live and work around forests, where they often cultivate and manage relatively small areas of land. The interests of these smallholders are not always compatible with the wider agenda of using forests as a carbon sink to mitigate the impact of climate change, while commercial interests are also keen to exploit natural resources like timber. “You’ve got the global interests of the climate change agenda, commercial markets in timber, and also smallholders. These are essentially the main stakeholders in forest management,” explains Adam. While smallholders clearly have a strong interest in maintaining and managing forests, the practices they use are often not widely appreciated. “A lot of what smallholders do is actually not recognised as forestry. It’s seen as something else that lies outside it,” he outlines.

A lot of the debate in this area has centered on the idea of forest transitions, which is related to the wider goal of reversing the decline in forest cover. However, this idea carries with it an enormous set of assumptions about the conditions under which forest areas increase. “Nepal has gone through a forest transition, in the sense that the overall forest area is increasing. However, it has happened under very different circumstances than in the West,” says Adam. While in the West the increase in forest size was driven in large part by economic shifts and the diminishing role of agriculture in the economy, Adam says this was not the main factor in Nepal. “Nepal is still a subsistence economy. The forest transition in Nepal has come about largely because of community forestry,” he explains.

the interests of the people who live and work there. As forests in Nepal have recovered, this has been accompanied by an agrarian crisis in the mid-hills, where many people have not been able to make ends meet. “Their access to forests has been restricted and there has been a process of labour out-migration due to a failing agrarian economy,” outlines Adam. This loss of labour has led to a retreat of the agricultural boundary, which has had wider consequences. “Trees have actually crept out of the formal forest boundary, down into agricultural land,” he continues. “That’s one important dynamic in Nepal. The situation is different in Peru, where agriculture is still expanding.”

This blurring of the boundary between agricultural and forest land raises questions around the approach to land governance. In Nepal, agriculturalists don’t like having trees in the agricultural landscape, because they see it as an unproductive use of land, while the flip-side of this can be seen in Peru, where the practice of swidden farming has been blamed for deforestation. “Swidden farming is a shifting system. It’s a fallowing system of land management that allows regeneration, selective burning and recovery,”

explains Adam. While this approach is low energy input and helps to maintain a diverse mix of crops and trees in forest areas, this is not encouraged by the Peruvian authorities. “The forestry department in Peru dislikes people practicing swidden systems in forest management,” he says. The Peruvian government has argued that swidden farming is one of the primary causes of deforestation, yet Adam and his colleagues in the project believe this doesn’t reflect the complexity of the overall picture. In Peru,

migration patterns have been a major factor in driving changing patterns of land use. “The indigenous kechwa-lamas people in Peru have historically mixed hunting with subsistence practices. Now migrants are moving down from the Andes into Amazonian areas where land is available. They are clearing it and establishing crops, particularly cocoa and coffee,” he explains. “This is partly driven by the commercialisation agenda of the provincial authorities, which are very interested in developing a sort of agroCrossing the upper reaches of the Amazon in San Martin, Peru, January 2019.

evidence that the Amazon has been managed for hundreds of years through selective planting, enrichment, and intensive agricultural practices. The way in which forests are viewed by bureaucracies has been shaped more by international agencies and forestry departments rather than the people who actually live and work there, believes Adam. The interdisciplinary research team which Adam leads is investigating issues around smallholder practices, land governance and agricultural changes in Brazil, Nepal and Peru, with the aim of helping build a wider perspective on forest management. “The project is partly about using different lenses to look at what goes on,” he says. Forestry departments and bureaucracies have proved to be relatively poor managers of forests. “Often they don’t understand the complexity of landscapes and the specific context, whereas the people who live there do understand, because they live there and manage it,” says Adam.

The ‘90s saw the emergence of democratic and social forestry movements in Nepal, as control of the forests came back into the hands of the people that traditionally used them. This has helped forests recover from the position in the ‘70s, when there was deep concern about the extent of deforestation. “Democratic de-centralisation has helped forests recover, particularly in the mid-hills,” says Adam. However, as forests have become more valuable, the forestry department has become increasingly interested in taking a greater degree of control. “There’s an ongoing debate between the forestry department and smallholders about their rights, as to who can manage the forests,” he says. The emerging market around carbon capture and sequestration opens up the possibility of using forests as a means to generate revenue, yet this is not necessarily in

Discussions with a community forest group in Dolokha, Nepal, November 2019.

The project aims to strengthen an existing collaboration on forests and people with research partners in Sweden, Nepal, Peru and Brazil and develop new ideas for future research. This will be undertaken through joint fieldtrips, analytical workshops, collaborative writing and new communication activities.

The project is funded by the Swedish Research Council, network grant 2017-5444 for approximately Euros 108,000.

Adam Pain has since 2006 been a Visiting Professor in Rural Development at SLU, Uppsala, Sweden. Over the last fifteen years he has undertaken research on environmental service provision, on Climate Change and rural institutions in Nepal, Peru and Brazil, common property management in Nepal and on biodiversity management in India. He is the co-author with Kjell Hansen of ‘Rural Development’ (2019, Routledge).

The research team from Nepal, Sweden and Peru on fieldwork in Nepal, November 2019.

industrial economy in the region. That’s what has attracted people.” A high level of in-migration by Andean people to cultivate commercial crops is leading to extensive forest clearance that is challenging to the forestry departments and their conservation agenda, This agenda is based to an extent on a perception of forests like the Amazon as pristine environments, untouched by man, which does not match the reality. “There is abundant evidence that the Amazon has been managed for hundreds of years through selective planting, enrichment, and intensive agricultural practices,” Adam says. This is related to the wider debate about primary and secondary forests, which Adam believes is deeply problematic. “It is based on models of ecological succession that simply don’t hold up. Most forests globally, whether they’re primary or secondary, have seen forms of intervention,” he stresses.

Forest management The practices used to manage these forests have evolved over time in response to changing conditions, yet in many cases they are not recognised by formal forestry science. By extending networking opportunities to international researchers, the project aims to help encourage knowledge-sharing. “We’re trying to stimulate debate and compare ideas,”

Adam says. The project will also make an important contribution to the ongoing debate around land management. “We work with a rights-based group in Peru which focuses on the rights of the kechwa-lamas people. Those rights have been systematically denied, particularly around issues of land and land tenure,” continues Adam. “We also have a strong engagement with a forest action group in Nepal, which is very actively engaged in policy debates.” Research into smallholder practices on the ground provides the basis on which these kinds of groups can challenge forestry departments where necessary and ensure that their voices are heard. A network meeting will be held in Nepal and November, which will provide valuable opportunities for researchers to exchange ideas and explore alternative theories about forest management. “A lot of national organisations are quite isolated. It’s important to bring in opportunities for critical debate about theory and evidence in relation to forest issues,” says Adam. This is not limited to members of the project network but also extends to other partners, which will help open up new avenues of investigation and opportunities for collaboration. “We want to use these forms of collaboration to leverage new research grants,” he continues. “It’s part of a collaborative and deliberative process. We aim to help our partners to develop their research capacities.”

Forests not only provide ecosystem services, they’re also places where people live and work. Professor Adam Pain and his team are investigat...

Forests not only provide ecosystem services, they’re also places where people live and work. Professor Adam Pain and his team are investigat...