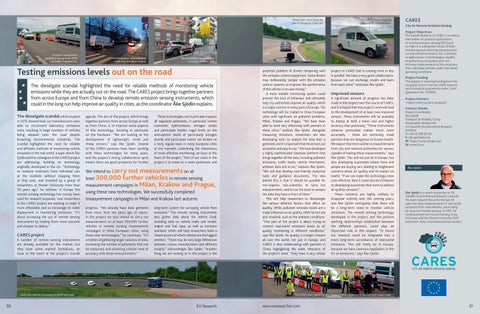 Photo taken from inside the cabin of the plume chase van.

Demonstration measurements in the city of Krakow, Poland.

Demonstration measurements in the city of Milan, Italy.

Testing emissions levels out on the road The dieselgate scandal highlighted the need for reliable methods of monitoring vehicle emissions while they are actually out on the road. The CARES project brings together partners from across Europe and from China to develop remote emission sensing instruments, which could in the long run help improve air quality in cities, as the coordinator Åke Sjödin explains. The dieselgate scandal which erupted in 2015 showed how car manufacturers were able to circumvent laboratory emissions tests, resulting in large numbers of vehicles being allowed onto the road despite breaching environmental standards. The scandal highlighted the need for reliable and efficient methods of monitoring vehicle emissions in the real world, a topic which Åke Sjödin and his colleagues in the CARES project are addressing, building on technology originally developed in the US. “Technology to measure emissions from individual cars at the roadside, without stopping them as they pass, was invented by a group of researchers at Denver University more than 30 years ago,” he outlines. In Europe this remote sensing technology has mostly been used for research purposes, now researchers in the CARES project are working to make it more affordable and so encourage its wider deployment in monitoring emissions. “It’s about increasing the use of remote sensing instruments by making them more accurate and cheaper to deploy.”

CARES project A number of remote sensing instruments are already available on the market, but they have some marked limitations, an issue at the heart of the project’s overall

agenda. The aim of the project, which brings together partners from across Europe as well as from China, is to improve some aspects of this technology, focusing in particular on the hardware. “We are looking at the development of lightweight, small and cheap sensors,” says Åke Sjödin. Several of the CARES partners have been working with these technologies for many years, and the project’s strong collaborative spirit means there are good prospects for further

These technologies can in principle measure all regulated pollutants, in particular carbon monoxide, hydrocarbons, nitrogen oxides and particulate matter. Legal limits on the atmospheric levels of particularly nitrogen dioxide and particulate matter are broken on a fairly regular basis in many European cities at the moment, underlining the importance of more effective monitoring, an issue at the heart of the project. “Part of our vision in the project is to move to a more systematic and

long-term system for surveying vehicle fleet emissions.” The remote sensing instruments also gather data about the vehicle itself, including data on vehicle make and model, engine and fuel type, as well as emission standard, which will help researchers build a clearer picture of which vehicles are the biggest emitters. “There may be very large differences between various manufacturers and different models,” acknowledges Åke Sjödin. “Another thing we are looking at in the project is the

project to CARES that is running more or less in parallel. We have a very good collaboration, because we can exchange results and learn from each other,” continues Åke Sjödin.

Improved sensors A significant amount of progress has been made in this respect over the course of CARES, and it is hoped that the project’s work will lead to the development of at least two improved sensors. These instruments will be available to deploy at both a lower cost and higher accuracy than previously. “These instruments measure particulate matter much more accurately – these are extremely small particles that are dangerous to human health. We expect that there will be increased demand from city and national authorities for sensors capable of making these measurements,” says Åke Sjödin. This will not just be in Europe, but also developing economies where more and people are buying cars, leading to heightened concerns about air quality and its impact on health. “If we can make this technology more cost-effective, then it could also be of interest to developing economies that want to address air quality concerns.” These concerns are highly unlikely to disappear entirely over the coming years, and Åke Sjödin anticipates that there will be a long-term need to monitor vehicle emissions. The remote sensing technology developed in the project, and the positive working relationships established between the different partners, could play an important role in this respect. “In future our research could be integrated into a more long-term surveillance of real-world emissions. This will firstly be in Europe, because we have common legislation in the EU on emissions,” says Åke Sjödin.

This project is receiving funding from the European Union’s Horizon 2020 research and innovation programme under Grant Agreement No. 814966.

Åke Sjödin is a senior researcher at IVL Swedish Environmental Research Institute. His main research focus for the last 30 years has been measurements of real-world emissions from road vehicles, particularly by means of remote sensing. In 1991, he conducted the first remote sensing study in Europe with the Denver University FEAT instrument. http://www.feat.biochem.du.edu/

The CARES team gathering after the successful completion of the test track experiments.

potential problem of drivers tampering with the emission control equipment. Some drivers may deliberately tamper with the emission control systems to improve the performance of the vehicle or to save money.” A more reliable monitoring system could prevent this kind of behaviour and ultimately help city authorities improve air quality, which is a major concern in many parts of Europe. The technology will be trialled in three European cities with significant air pollution problems, Milan, Krakow and Prague. “We have been able to work very effectively with partners in these cities,” outlines Åke Sjödin. Alongside measuring emissions, researchers are also developing tools to analyse the data that is gathered, and it’s important that these tools are accessible and easy to use. “We have developed a highly sophisticated database platform that brings together all the data, including pollutant emissions, traffic levels, vehicle information, ambient data and so on,” explains Åke Sjödin. “We will also develop user-friendly analytical tools and guidance documents. The idea behind this is that it should be possible for non-experts, non-scientists, to carry out measurements, and to use the tools to analyse the data they have in front of them.” This will help researchers to disentangle the various different factors that affect air quality. While pollutant emission levels are a major influence on air quality, other factors are also involved, such as the ambient conditions. “One part of the project is about trying to connect real-world emissions levels to air quality monitoring in different conditions,” says Åke Sjödin. Air quality is a major concern all over the world, not just in Europe, and CARES is also collaborating with partners in China, highlighting the wider relevance of the project’s work. “They have a very similar

The overall objective of CARES is to reduce the hurdles for practical applications of remote emission sensing (RES) and to make it a widespread means of both monitoring and enforcing improvements in road vehicle emissions. RES is defined as applications of technologies capable of performing contactless and nonintrusive measurements of the emissions from individual vehicles under real-world operating conditions.

The CARES project brings together partners to develop remote emission sensing instruments, which could in the long run help improve air quality in cities, as the coordinator Åke Sjödin explains.