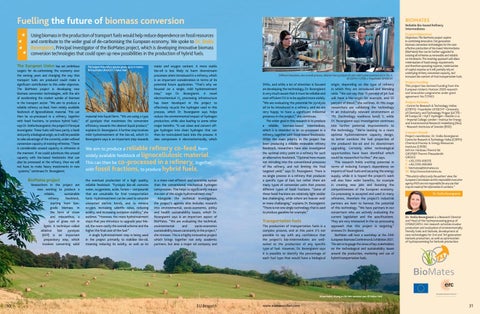 Fuelling the future of biomass conversion

Using biomass in the production of transport fuels would help reduce dependence on fossil resources and contribute to the wider goal of de-carbonising the European economy. We spoke to Dr. Stella Bezergianni, Principal Investigator of the BioMates project, which is developing innovative biomass conversion technologies that could open up new possibilities in the production of hybrid fuels. The European Union has set ambitious targets for de-carbonising the economy over the coming years and changing the way that transport fuels are produced could make a significant contribution to this wider objective. The BioMates project is developing new biomass conversion technologies, with the aim of accelerating the market uptake of biomass in the transport sector. “We aim to produce a reliable refinery co-feed, from widely available feedstock of lignocellulosic material. This can then be co-processed in a refinery, together with fossil fractions, to produce hybrid fuels,” says Dr. Stella Bezergianni, the project’s Principal Investigator. These fuels will have partly a fossil and partly a biological origin, so it will be possible to take advantage of the currently under-utilised conversion capacity of existing refineries. “There is considerable unused capacity in refineries at the moment. If we could substitute this unused capacity with bio-based feedstocks that can also be processed at the refinery, then we will not have to make heavy investments in new systems,” continues Dr. Bezergianni. BioMates project Researchers in the project are now working to produce a reliable, sustainable refinery feedstock, starting from lowgrade biomass in the form of straw and miscanthus, a type of grass rich in lignin. A technique called ablative fast pyrolysis (AFP) is an important preparatory step, which involves converting solid

material into liquid form. “We are using a type of pyrolysis that maximises the conversion efficiency towards the desired liquid product,” explains Dr. Bezergianni. A further step involves mild hydrotreatment of the bio-oil, which Dr Bezergianni says is an important step towards

water and oxygen content. A more stable bio-oil is less likely to harm downstream processes when introduced in a refinery, which is an important consideration in terms of its potential future application. “That’s why we focused on a single, mild hydrotreatment step,” says Dr. Bezergianni. A novel electrochemical H2 processing infrastructure has been developed in the project to effectively recycle the hydrogen used in this process, which Dr. Bezergianni says helps reduce the environmental impact of hydrogen production, while also leading to some other major benefits. “It can clean and convert offgas hydrogen into clean hydrogen that can then be recirculated back into the process. It also compresses it electrochemically, which

We aim to produce a reliable refinery co-feed, from widely available feedstock of lignocellulosic material. This can then be co-processed in a refinery, together with fossil fractions, to produce hybrid fuels. the eventual production of a high quality, reliable feedstock. “Pyrolysis bio-oil contains water, oxygenates, acids, furans – compounds that are unsuitable for final transportation fuels. Hydrotreatment can be used to saturate unwanted olefinic bonds, and to remove oxygen, increasing calorific value, reducing acidity, and increasing oxidation stability,” she outlines. “However, the more hydrotreatment steps that you introduce to upgrade your biooil, the more costly the overall scheme and the higher the final cost of the fuel.” A single hydrotreatment step is being used in the project primarily to stabilise bio-oil, meaning reducing its acidity, as well as its

is a more cost-efficient and economic option than the conventional mechanical hydrogen compression. This helps to significantly reduce the cost of this single hydrotreatment step.” Alongside the technical investigation, the project’s agenda also includes research into environmental, socio-economic, policy and health sustainability issues, which Dr. Bezergianni says is an important aspect of BioMates. “We are evaluating the technical, environmental and socio-economic sustainability issues constantly in the project,” she stresses. This is a highly innovative project which brings together not only academic partners, but also a major oil company and

SMEs, and while a lot of attention is focused on developing the technology, Dr. Bezergianni is very much aware that it must be reliable and cost-efficient if it is to be applied more widely. “We are evaluating the potential for pyrolysis oil to be introduced in a refinery, and we are very happy to have a significant industrial presence in the project,” she continues. The wider goal in this research is to produce a reliable, biomass-based intermediate, which it is intended to be co-processed in a refinery, together with fossil-based feedstocks. While the main priority in the project has been producing a reliable renewable refinery feedstock, researchers have also investigated the optimal entry point in a refinery for such an alternative feedstock. “Optimal here means not intruding into the conventional processes of the refinery, and not limiting the final targeted yield,” says Dr. Bezergianni. There is no single process in a refinery that produces a specific type of fuel, but rather there are many types of conversion units that process different types of fossil fractions. “Some of these fossil fractions are relatively light and/or less challenging, while others are heavier and/ or more challenging,” explains Dr. Bezergianni. “There is not one single technology that is used to produce gasoline for example.”

origin, depending on the type of refinery in which they are introduced and blending ratio. “We can say that 15 percent of jet fuel will have a bio-origin for example, and 55 percent of diesel,” she outlines. At this stage researchers are validating the technology in an industrially relevant environment at TRL (technology readiness level) 5, while Dr. Bezergianni says investigation continues into further potential improvements to the technology. “We’re looking to a more optimal hydrotreatment capacity design, to better combine the fuel properties of the produced bio-oil and its downstream upgrading. Certainly other technological opportunities have been identified which could be researched further,” she says. This research holds exciting potential in terms of reducing Europe’s dependence on imports of fossil fuels and securing the energy supply, while it is hoped the project’s work will also have wider benefits, for example in creating new jobs and boosting the competitiveness of the European economy. Co-processing is accepted and used in many refineries, therefore the project’s industrial partners are keen to harness the potential of this technology. “We have partners in our consortium who are actively evaluating the current legislation and the specifications. They are very interested in the co-processing approach that this project is targeting,” stresses Dr. Bezergianni. BioMates will host a workshop at the 29th European Biomass Conference &amp; Exhibition 2021. The aim is to gauge the views of key stakeholders on the technological and sustainability issues around the production, marketing and use of hybrid transportation fuels.

Objectives: The BioMates project aspires in combining innovative 2nd generation biomass conversion technologies for the costeffective production of bio-based intermediates (BioMates) that can be further upgraded in existing oil refineries as renewable and reliable co-feedstocks. The resulting approach will allow minimisation of fossil energy requirements and therefore operating expense, minimization of capital expense as it will partially rely on underlying refinery conversion capacity, and increased bio‐content of final transportation fuels.

Using biomass in the production of transport fuels would help reduce dependence on fossil resources and also de-carbonise the European economy, topics central to Dr. Stella Bezergianni’s work as Principal Investigator of the BioMates project.