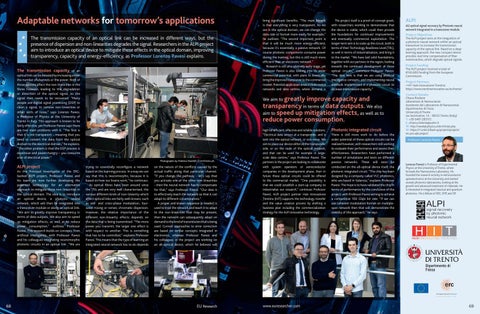 Adaptable networks for tomorrow’s applications The transmission capacity of an optical link can be increased in different ways, but the presence of dispersion and non-linearities degrades the signal. Researchers in the ALPI project aim to introduce an optical device to mitigate these effects in the optical domain, improving transparency, capacity and energy-efficiency, as Professor Lorenzo Pavesi explains. The transmission capacity

of an optical link can be boosted by increasing either the number of channels or the power. Both of those options affect the non-linearities in the fibres however, leading to the degradation or distortion of the optical signal, so the signal then needs to be recovered. “Many people use digital signal processing (DSP) to clean a signal, to remove non-linearities or other sorts of noise,” says Lorenzo Pavesi, a Professor of Physics at the University of Trento in Italy. This approach is known to be fairly effective, yet Professor Pavesi says there are two main problems with it. “The first is that it is not transparent – meaning that you need to convert the data from the optical domain to the electrical domain,” he explains. “The other problem is that the DSP process is expensive and power-hungry – you consume a lot of electrical power.”

ALPI project As the Principal Investigator of the ERCbacked ALPI project, Professor Pavesi and his team are now further developing the patented technology for an alternative approach to mitigate these non-linearities in the optical domain. The idea is to introduce an optical device, a photonic neural network, which will then be integrated into a transceiver module or along an optical link. “We aim to greatly improve transparency in terms of data outputs. We also aim to speed up mitigation effects, as well as to reduce power consumption,” outlines Professor Pavesi. This research builds on concepts from artificial intelligence, with Professor Pavesi and his colleagues integrating neuromorphic photonic circuits in an optical link. “We are

bring significant benefits. “The main benefit is that everything is very transparent. As we are in the optical domain, we can change the data rate or format more easily for example,” he outlines. “The second important point is that it will be much more energy-efficient, because it’s essentially a passive network. Of course photonic components consume power during the training, but this is still much more efficient than an electronic network.” Research is still at a relatively early stage, yet Professor Pavesi is also looking into its wider commercial potential, with plans to eventually bring the improved transceiver to the commercial market. Potential application areas include metro networks and data centres, where demand is

The project itself is a proof-of-concept grant, with researchers working to demonstrate that the device is viable, which could then provide the foundations for continued improvements and eventually commercial exploitation. The longer-term aim is to scale up the circuit, both in terms of their Technology Readiness Level (TRL), as well in terms of industrialisation, and bring it to the market. “We have laid solid foundations, together with our partners in the region, looking towards the continued development of these optical circuits,” continues Professor Pavesi. “The idea here is that we are using artificial intelligence concepts, and implementing neural methods implemented in a photonic circuit to increase transmission capacity.”

We aim to greatly improve capacity and transparency in terms of data outputs. We also aim to speed up mitigation effects, as well as to

trying to essentially reconfigure a network based on the learning process. In a way we can say that this is neuromorphic, because it is based on how our brains work,” he continues. As optical fibres have been around since the ‘70s and are very well characterised, the various different kinds of non-linearity which affect optical links are fairly well-known, such as self- and cross-phase modulation, fourwave mixing or raman, chromatic dispersion. However, the relative importance of the different non-linearity effects depends on the data that is being transmitted. “The more power you transmit, the larger one effect is with respect to another. This is something that has to be controlled,” explains Professor Pavesi. This means that the type of learning an integrated neural network has to do depends

on the nature of the conflicts caused by the actual traffic along that particular channel. “If you change the pathway - let’s say that you activate one or the other non-linearities - then the neural network has to compensate for that,” says Professor Pavesi. “Our idea is to effectively teach the network so that it can adapt to different circumstances.” A proper and known sequence (a header) is used to train the network and teach it to adapt to the non-linearities that may be present, then the network can subsequently adapt on demand to the kind of transmission that is being used. Current approaches to error correction are based on similar concepts integrated in electronics, whereas Professor Pavesi and his colleagues in the project are working on an all-optical device, which he believes will

high for efficient, effective and reliable solutions. “Electrical data arrives at a transponder, and is sent into the optical network, or vice-versa. We aim to place our device either at the transponder side, or on the node of the optical network, and that can be used for example in largescale data centres,” says Professor Pavesi. The partners in the project are looking to collaborate with system operators or semiconductor companies in the development phase, then in future these optical circuits could be offered to the commercial market. “One possibility is that we could establish a start-up company to industrialise our research,” continues Professor Pavesi. ALPI project partner Hub Innovazione Trentino (HIT) supports the technology transfer and the value creation process by drafting a business plan including the commercialization strategy for the ALPI innovative technology.

Photonic integrated circuit There is still more work to do before the wider potential of these optical circuits can be realised however, with researchers still working to evaluate their performance and assess their effectiveness. Researchers have performed a number of simulations and tests on different passive networks. These will soon be conducted on the all-optical device itself, the photonic integrated circuit. “The chip has been designed by a company called VLC photonics, who are based in Valencia,” explains Professor Pavesi. The hope is to have validated the chip in terms of performance by the conclusion of the project, with Professor Pavesi aiming to achieve a competitive 100 Gbps bit rate. “If we can use coherent modulation format on multiplespan network then that will demonstrate the viability of this approach,” he says.

The ALPI project aims at the integration of a photonic neural network within an optical transceiver to increase the transmission capacity of the optical link. Based on a deep learning approach, the new compact device provides real time compensation of fiber nonlinearities, which degrade optical signals.

The ALPI project received a total of €150,000 funding from the European Commission.

Lorenzo Pavesi is Professor of Experimental Physics at the University of Trento, where he leads the Nanoscience Laboratory. He founded the research activity in semiconductor optoelectronics at the University and started several photonics laboratories, looking at the growth and advanced treatment of materials. He is interested in integrated classical and quantum photonics. He is fellow of IEEE, SPIE and SIF.

Researchers in the ALPI project aim to introduce an optical device to mitigate signal degradation in the optical domain, improving transparency, capacity and energy efficiency, as Professor Lorenzo Pavesi explains.