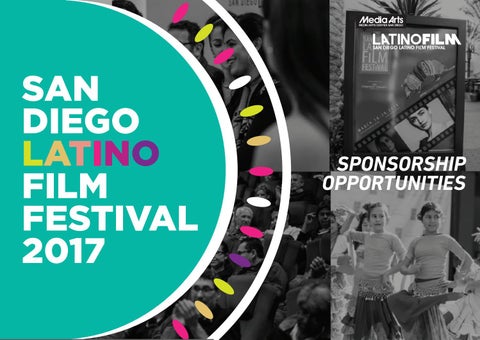 By supporting the San Diego Latino Film Festival, you are supporting the rise of independent Latino filmmakers and their participation in the mainstream media arts. You will be part of an annual gathering of film lovers, producers, filmmakers, celebrities, journalists, a passionate community of artists and influencers. 11 days of films, live music, art, workshops, galas and engaging social events.

Opportunities Who will you reach:

+ Business and community leaders, students, professors, and professionals who demonstrate an interest in Latino issues, history, culture and education.

+ Over 100 guest filmmakers and actors

+ Attendees from all of Southern

+ The San Diego Latino Film Festival celebrates the unique geographical and cultural position of San Diego, one of our country's finest cities and attractive destination for international travelers, through its diverse programming. As a border town, San Diego is a hub for social and political issues revolving around immigration and equal rights, themes that are often represented in the programming. This makes the festival an important voice in the region, showcasing features, shorts, and documentaries about the U.S. Latino experience. The festival is located in Mission Valley, “the heart of San Diego,” home to a large shopping area. It is the ideal venue to reach the 4 million-plus Latinos living in the County as well as in Tijuana. It is estimated that the buying power for this Latino population is $12.5 billion, spending heavily at malls, retail shops, restaurants, office space, luxury hotel accommodations, and more. This makes the San Diego Latino/Tijuana market the third largest Latino market in the United States. Simon Fashion Valley Mall is the most visited destination in San Diego County with more visitors than SeaWorld, The San Diego Zoo, Legoland, The Wild Animal Park, The Padres (MLB) and The Chargers (NFL) combined. Fashion Valley is San Diego’s home for upscale shopping. Offering the area’s finest collection of retail and dining options with everything from luxury to fast fashion. Fashion Valley enjoys a wide trade area extending from Rancho Santa Fe in the north to the US/Mexican border in the south, from the Pacific Ocean in the west to El Cajon in the east. The center is a major regional draw and sees weekend, drive shoppers from all of Southern California, Tijuana and Baja, Mexico as well as Arizona.

Per annual studies, the festival brings in over $875,000 into the local San Diego-Tijuana economy.

Screen Sponsor This sponsorship level provides your company with the prestige and recognition of being the exclusive ‘Presenter’ of the San Diego Latino Film Festival.

Promotional opportunities Promotional opportunities include on-air radio and television exposure, placement in all marketing materials under the “Presenting Sponsor” logo, and first mention and priority presence at all venues (i.e. company commercial prior to screening of all films, conspicuous on-site visibility to increase attendee-sponsor interactions, etc).

This unique sponsorship level will provide your company with an incredible amount of visibility and exclusivity for a minimal investment.

Promotional opportunities Promotional opportunities at the festival venue and on all marketing materials (i.e. festival brochure, website, Souvenir Program, etc) This level makes your company the “Owner” of one of the four screening auditoriums throughout the duration of the festival. Your company’s logo, brand, and name will be attached to every program and activity taking place at this specific site. As the “Owner”, your company can introduce films, present on-screen commercials, decorate the auditorium with promotional materials, and much more!

Harrah’s Casino, Bank of America, Verizon, and University of Phoenix.

Every year SDLFF highlights certain countries and/or genres in several “Showcases". Each "Showcase" includes 3-4 films, receptions, &/or seminars/workshops throughout the 11-day festival.

Party Sponsor This sponsorship level provides your company with the opportunity to sponsor 1 of the festival’s 3 prestigious parties.

Sponsorship opportunities are available for the following showcases: "Cine Mexica-

The "Party Sponsor" logo and name will be mentioned in any announcement and/or marketing materials related to these celebrations. Due to the expanded length of the annual festival, we've included a unique "Centerpiece Party” to take place at the half-way point of the festival. This sponsorship level allows your company to place signage at the party venue, giveaway branded swag to attendees, speaking opportunities, and much more!

Your company will be spotlighted anytime one of the “Showcase" films is screened and in all related marketing material (i.e. flyers, brochures, website, social networking sites, Souvenir Program, etc.). Additionally, your company will be featured in promotional materials if a “Showcase” film screens outside of the festival at the Digital Gym Cinema, or during one of our monthly cinema series like Cine en el Parque and ¡Que Viva!.

SDLFF is proud to offer this exciting sponsorship level that allows your company to directly support the filmmakers participating in the festival.

Promotional opportunities Your sponsorship fee will go towards the cash prizes, product donations, and commemorative statues/plaques the winning filmmakers receive. Anytime a specific award is announced and/or mentioned, your company will be highlighted. Choose an award category that best fits your company from the following:

include internationally recognized filmmakers, celebrities, critics and film scholars. The Jury Chairperson will be a well-known and respected Latino celebrity/film producer (TBA).

This sponsorship level provides your company with the unique opportunity to sponsor and present a particular film that connects directly to your companyâ&#x20AC;&#x2122;s brand or marketing goals (i.e. family film, music film, sports film, etc.).

Promotional opportunities The "Film Sponsor" logo and name will be mentioned whenever the specific sponsored film/program is announced. 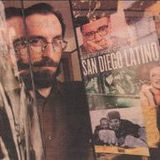