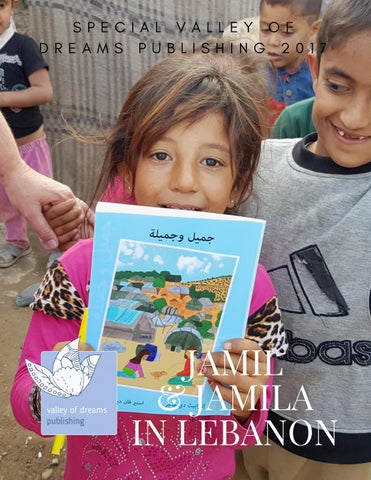 The war in Syria Of the 5.6 million children in need, 2.1 million (nearly 40 percent) are out of school. From the 6 million people who fled out of their country, about 3 million of them are children with low acces to school. An estimated 2 million children are traumatized as a result of their experiences in the war. The same goes for Jamil and Jamila, the fictional characters in this book, who are staying in a Syrian refugee camp. This book is based on real events that happened to children at refugee camps. The book is used at schools in refugee camps. By reading about situations that are familiar to the children, these children learn to think and talk about what happened and how they can build a new future. In a slightly adjusted form, this book will be handed out at schools in refugee camps. Children in Europe or other parts of the world who read this book will be gain a better understanding of children who live under difficult circumstances in refugee camps. NOMADIC

The book Jamil & Jamila This book has been written at the request of a refugee organization, Ash-sham care, in Syria and Refkid in the Netherlands. This foundations supports local organizations that work to enable children in Syria to go back to school. This can be in government-funded schools as well as improvised locations in the neighbourhood. Going to school is very important, for these children.The Arabic version (translations done by Syrian professionals) of this book is used at schools in refugee camps. Written stories describing situations that are familiar to the children, help them think and talk about what happened and also how they can work on their future. This book helps the children to cope with their traumas and enables them to take their education to a higher level. Reaction NGO in Libanon: Our school bus teacher read the book (and so did her kids) and she is excited to pass it out to the kids tomorrow at one of the settlements we work in.

LIVING IN A TENT

Jamil & Jamila About the live of children in a regufeecamp

Publisher ‘Valley of Dreams Publishing’ and the authors, Elsbeth de Jager and Esther van der Ham, have worked on this book, free of charge, for Syrian refugees as have the translators and reviewers. By buying a copy of this book in any language the publisher will sponsor an Arabic version of the book from this serie for the children in a refugee camp.Elsbeth de Jager and Esther van der Ham, Dutch authors, wrote the books to help refugee children to overcome their traumas. Esther van der Ham illustrated this book and contributed „Und nun du!“ (And now it’s your turn!), an appendix containing educational topics for refugee children and information about Syria, Syrian recipes, the Arabic alphabet and much more in the Dutch and NOMADIC | 24 German version.

About Jamil & Jamila Jamil and Jamila are two eight-year old children. They live in the Syrian refugee camp Bab es Salaam. In the book ‘Jamil & Jamila’ we have already introduced them to you and you may also remember the circumstances in the camp which they have to deal with. For instance, why don’t they remember their surnames? And what is the reason they don’t know the names of colours anymore? Where are all the missing family members? In this book, the story of Jamil and Jamila continues. Elsbeth and Esther visited Syrian schools on the borders of Syria to know more about actual refugee children when writing the Jamil and Jamila book series. Everything described in this book, really happened. At the request of a relief organization for Syrian refugees, Esther painted the school containers with her ‘Valley of dreams’ artwork. The monuments, described in this book, are on the containers. In January 2015, these containers arrived at the camp and have been used since then as school classrooms.

This is the time line for the Jamil & Jamila books, translations and journeys. The books are written for refugee children, to help them overcome their war traumas. The project is a joint effort of Oscar Bergamin, Esther van der Ham and Elsbeth de Jager. August 2014: Writing Jamil & Jamila 1 (based on stories told by Oscar). Translation of Jamil & Jamila 1 into Arabic. November 2014: First journey (Elsbeth, Esther and Oscar) to Gaziantep region. We took the books in Arabic to Syrian refugee children near the Syrian border (Turkey) where we spoke to many children, parents and teachers.An editor is a person who edits or makes changes to documents. January 2015: Second journey (Esther and Oscar) to Gaziantep region. Esther paints containers for a school project in a Syrian refugee camp. August 2015 : Writing Jamil & Jamila 2: Homesick October 2015: Giving books to Syrian refugee children in the Netherlands November 2015: Esther gives a talk at Tedx in Breda, The Netherlands

February 2016: Third journey (Esther and Oscar) to the Balkan Esther and Oscar made a trip through the Balkan region from Lesbos to the Serbian Border. Following the refugees to write the 3rd book about Jamil & Jamila. March 2016: Writing Jamil & Jamila 3: The journey September 2016: Translation Jamil & Jamila Homesick (book 2) into Arabic November 2016: Fourth journey (Esther, Elsbeth and Oscar) to Lebanon Taking books to refugee camps in Lebanon and visiting the Dutch ambassador in Lebanon. April 2017 5th journey: Elsbeth delivered 450 books to Greece (Athens and Lesbos) June 2017 6th journey: Esther and Oscar visited Lebanon (Beekah valley) to bring the book Jamil & Jamila to the children. to have workshops with them and to make oppiontments with local NGOs to set up a magazine with and for the kids. That will start in september 2017. NOMADIC

Living in a tent: sun and heat rain and wet snow and cold

Jamil& Jamila Elsbeth de Jager and Esther van der Ham are the autors/illustrator of the Jamil&Jamila books. The innitiator of the books is Oscar Bergamin, president of Ref Kid. More about them: Elsbeth is a German/Dutch translator and teacher. She teaches â&#x20AC;&#x2DC;Dutch as a foreign languageâ&#x20AC;&#x2122; at a refugee school, and German and, when there is time left, she writes books. She has two children and a grandson and she is happily married. Esther is a civil engineer who studied technical management at university. She is also a coach for children. She likes writing and painting. Her publishing house focuses on books that are important for the development of the readers.

Jamil& Jamila 2 Homesick Jamil and Jamila face many unpleasant experiences. Jamil is sad because of his paralyzed little sister and Jamila because of the disappearance of her brother. They meet at a refugee camp and they are always there to help each other. Jamil, for instance, doesnâ&#x20AC;&#x2122;t really dare to join the choir, but his schoolteacher is convinced it will do him good. Bold Jamila also stimulates him to join the choir. Fortunately, nice things happen as well! One day, school containers arrive, painted with cheerful suns and birds, and also with several well-known buildings in Syria. The buildings that Jamil and Jamila miss so much, seem somewhat nearer.

Workshop given by Esther, june 2017

â&#x20AC;&#x153;A book for you, a book for them!â&#x20AC;? The slogan means that every sold book will cover the expenses for a free book for a refugee in his or her own language given by the publisher. Children who are not in a country at war learn more about the lives of refugees and refugee children receive a book to read and cherish. For every copy sold publishing house Valley of Dreams Publishing provides a book for free to a refugee child. The book is published in Arabic and Urdu for refugee children, and in Dutch, English, French, German, Greek, Italian, Polish, Swedish and Turkish to sell to children and adults in other areas of the world. More languages are added when possible. The books that are purchased include an appendix with recipes for dishes mentioned in the book, how to pronounce a few words in Arabic, a map of the long and dangerous journeys of Jamil and Jamila and more! Reading the stories helps the reader understand the Syrian culture. NOMADIC

Help them and sponsor! Buy the books. For each sold copy, Valley or Dreams publishing will make a book of this series available free of charge to children in a Syrian refugee camp or to Syrian refugee children. Valley of dreams publishing is starting to make a magazine like this with the refugeekids. We made oppiontments with local NGOs to set up a magazine with and for the kids. That will start in september 2017. Donate: http://www.paypal.me/droomvallei The authors, illustrator, publishing house and all translators and reviewers all participated in this project on a voluntary basis. The books are taken by volunteers to the camps and homes to hand out personally. The authors and the illustrator and publisher, but also translators travel to hand out books. All travel expenses are paid for by the volunteers, any and all donations and sales, after deducting the costs for printing the books and shipping and handling, is invested directly in books to hand out to refugee children. 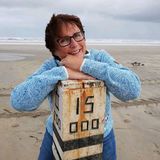 The book Jamil & Jamila has been written at the request of a refugee organization Ash-Sham care in Syria and Refkid in the Netherlands. This...

The book Jamil & Jamila has been written at the request of a refugee organization Ash-Sham care in Syria and Refkid in the Netherlands. This...