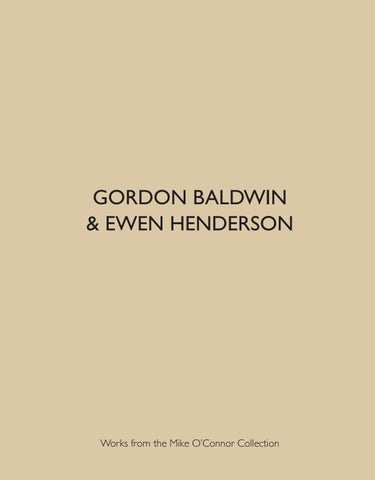 The years pass and the connections multiply. This show is the tenth to have been created for the Verey Gallery since September 2011. In less than an hour with Matthew Hall, in a sunlit space full of pieces by Gordon Baldwin, our connections were revealed and an exhibition was born. The support of the College has enabled the Verey Gallery to be a part of a committed policy of reaching out not just to the school and its community but also to many other schools and communities. Indeed, this exhibition will be the focus of an art trail linking to the Windsor festival. The connections grow daily. Sir David Verey CBE

Gordon Baldwin and Ewen Henderson from the Mike O’Connor Collection

On the face of it, the two ceramic artists exhibited together here could not be more different. Gordon Baldwin’s sculptural vessels, with their smooth, painterly surfaces, and considered forms, stand perfectly balanced. Although invariably asymmetrical, enquiring, the questions they explore elucidated with patches, pocks, grids and lines, they have a poised authority. Ewen Henderson’s sculptures, by contrast, seem to re-enact the drama of their making. Craggy, rough, your eye dances over their surfaces, drawn from one excitement of texture or colour to another, discovering their formal logic as you move around them. They seem to triumph in accident, just as mountains owe their magnificence to cataclysmic movements beneath the earth’s surface. Seen side by side, however, similarities begin to emerge. Although these objects are made of clay, and most are vessels, they are far removed from functional ceramics. Material and form have become metaphors, recalling geological formations, seas and skies, ships and towers, paper and stone, bone and flesh. For both, clay, a humble material in comparison with bronze or marble, offers a sense of connection with humankind’s earliest makers as well as with the landscape from which clay is dug. Both build their objects by hand, eschewing the potter’s wheel, and while both use paint and colour, neither uses conventional glazes. Texture, the intimation to the viewer of how the pot would feel against the skin, plays as important a role as colour or form. Above all, these objects are ambitious. They address both formal and existential questions with continually renewed imagination and a profound seriousness. As the critic David Whiting puts it, “Both have shown how malleable clay can be in terms of three-dimensional drawing. Form is something to be reinvented, continually re-shaped, shifting, not reduced to some static or repeated ‘style’.... It is not about resolution, but about asking new questions, entirely new ones every time you make a piece.” Baldwin (b. 1932), and Henderson (1934-2000), were near contemporaries, children during the war. They formed part of a generation, including figures such as Gillian Lowndes and Bryan Illsley, who recognised, as the painter Paul Gauguin had done in the 1880s, that far from peripheral, ceramics can be “a central art”, that it could be part of the mainstream conversation of contemporary art, alongside sculpture, music, literature and painting. Figures from a previous generation, such as Michael Cardew, had been influenced overwhelmingly by the ideas of the Anglo-Japanese potter,

Bernard Leach, and had placed a value above all on the anonymous creation of functional wares - vases, jugs, bowls and plates. They had looked back to Medieval pottery, to Japanese tea bowls, to Chinese Song Dynasty pots and to African and other ancient pottery traditions. During the Second World War, however, the emigrés Lucie Rie and Hans Coper had brought to Britain a different aesthetic, one derived ultimately from modernist movements in art and design. Coper’s pots, in particular, owed more to prehistoric and modern sculpture than to the traditions of rural potting. In the 1950s and 1960s a generation of inspired teachers of ceramics, including Rie and Coper, encouraged an explosion of creativity in British art schools, one which, in an exhibition he curated in 1995, Henderson likened to the opening of Pandora’s Box. Baldwin started out as a painter. Klee, Kandinsky, Kokoschka, Giacometti and Arp were primary inspirations, as well as contemporary music - John Cage, John Adams, Karlheisen Stockhausen - and poetry. At Lincoln Art School however he was introduced to the work of Hans Coper. He recalls, “I was always bothered by Englishmen making work that looked Japanese – now I thought, ‘So pots can be modern!” He moved on to the Central School of Art, in London, where he took a course in industrial ceramics taught by Dora Billington and the sculptors Eduardo Paolozzi and William Turnbull. Here he began to develop his highly personal work, as much painting as sculpture. Henderson, meanwhile, did not take up art at all until his late twenties, inspired by evening classes and summer school. At Goldsmith’s he discovered clay (“I fell in love with both the material and the vessel as a magical form;” he once said) before studying ceramics at Camberwell School of Art under, among others, Hans Coper and Lucie Rie. Throughout his life Henderson continued to draw and paint, describing his collaged sculptures as “a kind of drawing in three dimensions.” For both, as it happens, the wild coastal landscapes of Wales have been a continual source of inspiration. Mike O’Connor, himself an artist, first met Baldwin here, at Eton College, where Baldwin taught for thirty-nine years, and where O’Connor had come as artist-in-residence. O’Connor’s widow says, “I think Gordon really sparked Mike’s passion for ceramics. His work was quite unlike anyone else working at the time.” They encountered Henderson’s work later but became good friends of both the artist and his wife. The pots here form part of what became a large collection of over 1,000 pots, prints and carvings. As Smith O’Connor remarks, “Gordon and Ewen are seemingly opposites, but both questioned the making of ceramics and came up with completely different answers, both equally valid and exciting.” Emma Crichton-Miller, 2016

Ewen Henderson (1934-2000) Born in Staffordshire in 1934, Ewen Henderson became interested in painting and sculpture while working for a timber company in Cardiff and started attending evening classes at the local art school. In 1964 he began a foundation course at Goldsmiths College in London where he first encountered clay. Later he would study ceramics under, among others, Hans Coper and Lucie Rie, at the Camberwell School of Art. But he always made time to draw and paint. He graduated in 1968 and continued his studies at Edinburgh College of Art before returning to London. Henderson very soon left the wheel behind and moved to the freedom of hand-building. Throughout his career he explored clay as a medium in its own right, and said of his work that: “It explores the significance of what is broken, torn or cut, the ability of single or multiple forms to speak of either compression or expansion, flatness or fullness. It is a kind of drawing in three dimensions. I start with fragments - familiar, found, improvised and then build up to complex structures that invite the observer to complete the circuit, so to speak, by considering such matters as memory, invention and metaphor.” In parallel with ceramics his passion for painting continued throughout his career, with watercolours, gouaches and collages becoming increasingly inseparable from his ceramics. Ancient cultures, geological forms and landscapes were persistent influences during his career - Avebury, Eden Valley in Cumbria, the Rollright Stones in north Oxfordshire, Orkney, and Manorbier in Pembrokeshire where he had a home for the last year of his life. Henderson’s work is viewable in many international public collections, including The Metropolitan Museum of Art in New York, the Stedelijk Museum in Amsterdam, the Australian National Gallery in Canberra, the Kyoto Museum of Modern Art and the Victoria & Albert Museum in London.

â&#x20AC;&#x153;I fell in love with both the material and the vessel as a magical form; but it was a long time before I realised how I wanted to use it...I was seduced by the alchemy of change where you take a material...and it is transmogrified into something else.â&#x20AC;? Ewen Henderson

Gordon Baldwin (b. 1932) Gordon Baldwin was born in Lincoln, England in 1932, and studied painting and pottery at the Lincoln School of Art and then at the Central School of Art and Design. He became a teacher of ceramics and sculpture at Eton College and has since become one of the world’s most distinguished ceramic artists. His early work featured functional stoneware vessels and tinglazed earthenware, and often reflected his fascination with landscape. As he developed as an artist, his work became influenced by contemporary sculpture. In the 1950s, he employed a variety of techniques and began hand-building, using both earthenware and stoneware, often reworking and re-firing pieces several times. He is recognised for the rich variety of forms he builds which combine sculptural form with abstract painterly marks. Baldwin has been very influential in moving ceramics towards sculpted structures and away from traditional functional pots. Baldwin has described his approach as ‘a non search for beauty,’ finding most satisfaction in ‘forms which have a certain awkward resonance,’ a more challenging purity and strength. Today, he is based at his home in Shropshire. Baldwin has received many awards throughout his career, including an OBE in 1992 and an honorary doctorate from the Royal College of Art in London in 2000. He was shortlisted for the Jerwood Ceramic Prize in 1996, and to mark his 80th birthday, there was a touring exhibition and retrospective of his work in 2012. He has exhibited his sculptures internationally and is represented in many public collections.

â&#x20AC;&#x153;The role I take is Artist as Explorer with the vessel as my basic structure (like the structure of a Haiku). Each piece begins out of a strange compulsion to take a certain action... I usually work in series constructing by the traditional method of coiling, discovering the piece as I proceed. It is an intuitive process carried on without analytical thought. The piece is made when the resonances are right.â&#x20AC;?

* Both works from Eton College Collections. Reproduced by kind permission of the Provost and Fellows of Eton College

Design by fivefourandahalf Printed by Witherbys Lithoflow Printing All photography by Michael Harvey, with the exception of the works from Eton College Collections 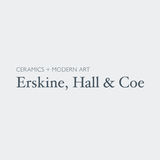 An exhibition of works from the Mike O'Connor Collection held at the Verey Gallery, Eton College.

An exhibition of works from the Mike O'Connor Collection held at the Verey Gallery, Eton College.