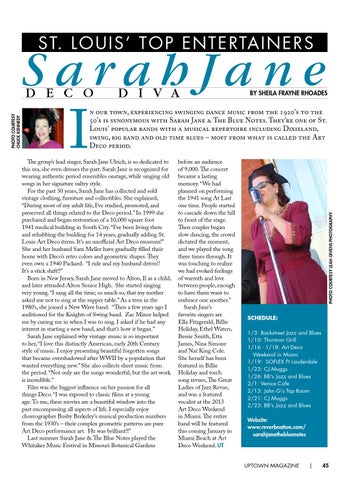 n our town, experiencing swinging dance music from the 1920&#39;s to the 50&#39;s is synonymous with Sarah Jane &amp; The Blue Notes. They’re one of St. Louis&#39; popular bands with a musical repertoire including Dixieland, swing, big band and old time blues – most from what is called the Art Deco period.

The group’s lead singer, Sarah Jane Ulrich, is so dedicated to this era, she even dresses the part. Sarah Jane is recognized for wearing authentic period ensembles onstage, while singing old songs in her signature sultry style. For the past 30 years, Sarah Jane has collected and sold vintage clothing, furniture and collectibles. She explained, “During most of my adult life, I’ve studied, promoted, and preserved all things related to the Deco period.” In 1999 she purchased and began restoration of a 10,000 square foot 1941 medical building in South City. “I’ve been living there and rehabbing the building for 14 years, gradually adding St. Louis Art Deco items. It’s an unofficial Art Deco museum!” She and her husband Sam Meller have gradually filled their home with Deco’s retro colors and geometric shapes. They even own a 1940 Packard. “I ride and my husband drives!! It’s a stick shift!!” Born in New Jersey, Sarah Jane moved to Alton, Il as a child, and later attended Alton Senior High. She started singing very young. “I sang all the time; so much so, that my mother asked me not to sing at the supper table.” As a teen in the 1980’s, she joined a New Wave band. “Then a few years ago I auditioned for the Knights of Swing band. Zac Minor helped me by cueing me in when I was to sing. I asked if he had any interest in starting a new band, and that’s how it began.” Sarah Jane explained why vintage music is so important to her, “I love this distinctly American, early 20th Century style of music. I enjoy presenting beautiful forgotten songs that became overshadowed after WWII by a population that wanted everything new.” She also collects sheet music from the period. “Not only are the songs wonderful, but the art work is incredible.” Film was the biggest influence on her passion for all things Deco. “I was exposed to classic films at a young age. To me, these movies are a beautiful window into the past encompassing all aspects of life. I especially enjoy choreographer Busby Berkeley’s musical production numbers from the 1930’s – their complex geometric patterns are pure Art Deco performance art. He was brilliant!!” Last summer Sarah Jane &amp; The Blue Notes played the Whitaker Music Festival in Missouri Botanical Gardens

before an audience of 9,000. The concert became a lasting memory. “We had planned on performing the 1941 song At Last one time. People started to cascade down the hill to front of the stage. Then couples began slow dancing, the crowd dictated the moment, and we played the song three times through. It was touching to realize we had evoked feelings of warmth and love between people, enough to have them want to embrace one another.” Sarah Jane’s favorite singers are Ella Fitzgerald, Billie Holiday, Ethel Waters, Bessie Smith, Etta James, Nina Simone and Nat King Cole. She herself has been featured in Billie Holiday and torch song revues, The Great Ladies of Jazz Revue, and was a featured vocalist at the 2013 Art Deco Weekend in Miami. The entire band will be featured this coming January in Miami Beach at Art Deco Weekend. UT 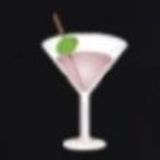