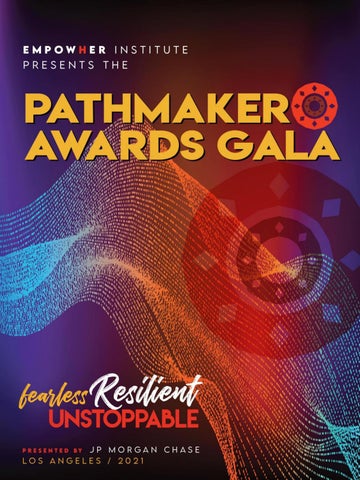 On behalf of the EmpowHer Institute Board of Directors & Advisory Board, Gala Host Committee, and staff, it is with great pride and pleasure that we welcome you to the 7th Annual PATHMAKER Awards Gala! This year’s theme: Fearless. Resilient. Unstoppable. celebrates women whose achievements, leadership, courage, and strength are making a significant contribution to the advancement of girls and women. All proceeds of tonight’s event will support our programs and services, which serve to support BIPOC girls in developing the skills and gaining the access to the necessary resources to boldly break ceilings, embrace the power of their voice, engage in social justice, and break generational cycles of poverty. When we think about who has been most impacted by this global pandemic, it is marginalized communities. 96% of our girls live at or below the poverty level. While they were already experiencing significant stress due to economic and health disparities prior to the pandemic, the past 19 months have been even more overwhelming. We have weathered the storm with our girls, and will continue to support them every step of the way. It has not been easy and we can not do it alone. That is why your attendance and generosity tonight is so deeply needed and appreciated.

We have a fun evening planned for you! We are thrilled to celebrate our four incredible 2021 Betty LaMarr PATHMAKER Award (formerly PATHMAKER Award) honorees, who include our very own Founder, Betty LaMarr. Her vision and dedication is the backbone of our very existence as an organization. It is an honor to continue her legacy. There are so many people who have dedicated their time to make tonight’s event happen. Please join me in thanking our staff, volunteers, and special guests. We salute their passion and tireless efforts. We hope you enjoy tonight!

We are proud to serve as the Host Committee for the PATHMAKER Awards Gala. Thank you for joining us both virtually and in-person. Your support is invaluable. On behalf of EmpowHer Institute, the over 4500 girls we have served since 2003 and our volunteer mentors, we extend to you a warm welcome. Thank you to our sponsors, whose continued support makes EmpowHer’s work possible. We are proud to have JP Morgan Chase, Lawrence Livermore National Laboratories, Proven Recruiting, Sony Music, Frontier Communications, Pacific Premier Bank, LA County, CISCO, World Wide Technology, United Oil, NYX, L’ANZA, Grandview, National Football League, City National Bank, Rouge Planet, and Smart & Final in our corner. There is no way to measure our gratitude. With your support, we will be able to grow our reach in 2022 by partnering with additional schools to serve more girls. At the heart of our work are our girls. Our girls are facing challenges head on and weathering storms. They are inspiring us to be better and better with each year. EmpowHer is a sisterhood. It takes us all to nurture the next generation of leaders. We must express our heartfelt gratitude to everyone who helped to make tonight possible. Your commitment to our mission in deeply appreciated. Enjoy your evening!

The Betty LaMarr PATHMAKER Award (formerly known as the PATHMAKER Award) recognizes and honors four phenomenal women for their achievements, leadership, courage, and significant contribution to the lives of girls and women everywhere.

BETTY LAMARR Founder, EmpowHer Institute Betty LaMarr, Author and Founder, Empowher Institute, is passionate about serving others through coaching and mentoring. While living in South Africa, Betty saw the devastating effects poverty and powerlessness have on girls and women. Inspired by her South Africa experience, Betty came back to the United States and founded EmpowHer Institute in 2003 with a mission to create self-driven success for low-income middle school girls with a focus is on a holistic approach to transformation of the girl’s character, self-worth and well-being. During her time leading the organization Betty has built a strong foundation serving teen girls in marginalized communities. Under her leadership, the organization raised over $2 million between 2014-2020, serving 4000+ girls with a corps of over 1000 volunteers.

Betty earned a BA in Business Administration from California State University at Los Angeles, and an MBA from Pepperdine University. She is a featured author in books: Discover Your Inner Strength, The Heart of Women in Business, Million Dollar Conversations and Life Moments for Women. As an activist for change, the Mayor of Los Angeles and California’s Lieutenant Governor honored Betty for outstanding community service as well as her contributions to a variety of youth organizations. Betty was most recently awarded the Services to Youth Award by the Palos Verdes Chapter, Links, Inc. She has also received the Pepperdine Waves of Service Award to an alumna whose career demonstrates a life strengthened for “purpose, service and leadership” and she has been featured in various magazines, including Black Enterprise and Origin. When Betty is not changing the world for the better, she is traveling exploring culture and history.

Dolores Huerta is one of the most influential labor activists of the 20th century. She coined the popular protest chant decades before it would become an enduring campaign slogan for President Obama “Yes We Can”. Dolores worked tirelessly to launch a worker’s rights revolution along with Cesar Chavez during a time when the United States had a dark history buried in its farm fields at a time when some were afraid to fight for their rights.

In 1962, she and Cesar Chavez founded the United Farm Workers union. She served as Vice President and played a critical role in many of the union’s accomplishments for four decades. In 2002, she received the Puffin/Nation $100,000 prize for Creative Citizenship which she used to establish the Dolores Huerta Foundation. She has received numerous awards: among them The Eleanor Roosevelt Humans Rights Award from President Clinton in 1998. In 2012 President Obama bestowed Dolores with The Presidential Medal of Freedom, the highest civilian honor in the United States. Dolores has 7 schools named after her in California and the State of California has named April 8, Dolores Huerta Day. She has worked for labor rights and social justice for over 50 years. Her strength and determination helped shape one of the 1st farm worker’s unions and in turn Dolores became a pioneer of modern day social justice. She is a civil rights hero who is also a symbol of change.

On November 3, 2020, Supervisor Holly J. Mitchell was elected to serve the Second District of Los Angeles County. Throughout her career in public service, Supervisor Mitchell has always worked with the understanding – that creating a California where all residents can thrive – means investing in the communities, families and children of LA County. Having authored and passed over 90 laws in the California Legislature, Supervisor Mitchell brings an extensive public policy record to the Board of Supervisors. Many of her bills have been at the forefront of expanding healthcare access, addressing systemic racism, and championing criminal justice reform. During her tenure in the California State Legislature, Supervisor Mitchell represented the 54th District for three years as an Assemblymember and later served seven years as State Senator for the 30th District. As State Senator, she also held the distinction of being the first African American to serve as Chair of the Senate Budget and Fiscal Review Committee. Prior to serving in elected office, Supervisor Mitchell was CEO of Crystal Stairs, California’s largest nonprofit dedicated to child and family development. Supervisor Mitchell’s leadership has been recognized by over 100 community and business groups. She was recently honored as a 2020 Visionary by Oprah Winfrey’s O Magazine for making California the first state in the nation to ban natural hair discrimination with The CROWN Act. Supervisor Mitchell is an alum of the University of California at Riverside Highlander, a CORO Foundation Fellow, and mother to Ryan.

Shelley is a jack of all trades including feature reporting for E:60, general reporting for SportsCenter and for the last five years has taught TV and writing journalism at USC’s Annenberg School for Communication and Journalism in Los Angeles. She was most recently recognized for a long form piece on blind USC snapper Jake Olson. In July she won a New York press club award for her story on Kwity Paye, who was raised in a refugee camp in Ghana, went on to star in football at Michigan and last spring was a first-round draft pick for the Indianapolis Colts. A former writer-reporter for Sports Illustrated Smith is currently the NFL Nation writer for the Los Angeles Chargers. Shelley is an author of three books –“Just Give Me The Damn Ball,” with former New York Jets and current ESPN analyst Keyshawn Johnson, “You Play to Win The Game,” with former head coach and current ESPN analyst Herm Edwards and “Games Girls Play: Lessons to Guiding and Understanding Young Female Athletes.” She survived three different cancers and was given the Rainbow Sports Life Beyond the Playing Field Courage Award from the Rev. Jesse Jackson and the inaugural John Saunders Spirit Award. She is the mother of Dylann Tharp, 35, the manager at Pappy & Harriets, an award-winning restaurant and live music spot in Pioneertown. Whether it’s in the classroom or at ESPN, Shelley always enjoys helping people get better and become more confident.

OUR MISSION Empower girls and young women in marginalized communities by helping them gain the skills necessary through education, training and mentorship to become confident, college and career ready.

OUR VISION We envision a world where every girl is provided the opportunities and resources she uniquely needs to: embrace the power of her voice; make informed decision about her body and future; break generational cycles of poverty; contribute to the creation of an equitable society.

Cisco Systems, in partnership with the County of Los Angeles and World Wide Technology are proud to sponsor EmpowHer PATHMAKER Awards Gala

THANK YOU Board of Directors

Digital Program Powered by The Power Is Now Media

Thank You For investing in our girls and their futures 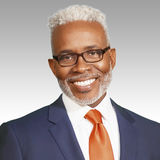 The Power Is Now Media Inc.

The Power Is Now is once again a proud sponsor of the digital Program Journal. EmpowHer Institute is proud to announce their 2021 PATHMAKE...

The Power Is Now is once again a proud sponsor of the digital Program Journal. EmpowHer Institute is proud to announce their 2021 PATHMAKE...