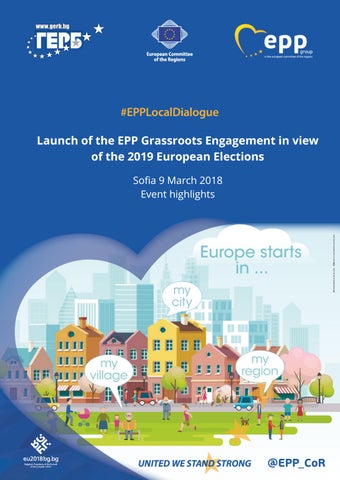 EPP Local Dialogues Europe starts in my village/city/region EPP Local Dialogues are a series of events organised across Europe, bringing citizens and EPP leaders together to discuss European policies of local interest and gathering feedback on the ground. The topics for the Dialogues are chosen according to the specificity and political landscape of the city or region. The Dialogues are part of the EPP Grassroots Engagement for the 2019 European Elections, an initiative launched in Sofia, Bulgaria, on 9 March 2018. During the dialogue, political leaders from local, regional, national and European levels engage in an open and honest debate with citizens, addressing local concerns and also opportunities provided by the EU. The Dialogues follow the model of town hall debates with citizens, inspired by the

initiative "Reflecting on Europe", which was triggered by a request from the President of the European Council, Donald Tusk, to engage in a dialogue directly with citizens. The purpose of the EPP Local Dialogues and the Grassroots Engagement is to listen to citizens, and to make sure that local concerns and interests are taken on board in EU politics, as well as to highlight concrete good examples of projects implemented at the local and regional level by EPP leaders. The outcomes of these debates will be shared with the two political assemblies of the EU â&#x20AC;&#x201C; the European Parliament and the Committee of the Regions â&#x20AC;&#x201C; as well as with the EPP "Spitzenkandidat" for the President of the European Commission. Our Engagement will provide an opportunity for citizens to make their voice heard on the future of the European Union.

We are family: EPP grassroots engagement in view of the 2019 European elections European citizens want a European Union that meets their expectations and demonstrates added value through its problemsolving capacities. A socially inclusive Europe which listens and understands in order to protect, empower and defend the interests of the people. A Europe which supports cohesion as the main investment policy for all its regions. A strong, efficient and united EU is the best guarantee for our peace, freedom and prosperity, and so it should remain in the future. However, the way some crises have been handled has disappointed our citizens. A major challenge today is an increase of nationalism and extremism from both the left and right spectrum of politics. We should not allow these forces to diminish our pro-European values. The EPP offers the way to reach a clear pro-European majority after 2019. The success of the EPP in the 2014 elections was a collective achievement. Given the current political situation, we must do even better for the 2019 European elections. We need a new dynamic and a new cohesion. The EPP is represented in all Member States at all levels of government, and we must work more intensively as one, strong, united and responsible political family. We know that reforms were successful, but they take time and now many implemented measures are beginning to bear fruit. As the EPP family, we have to communicate with courage and determination both what we have achieved and what we will achieve in the future, if we want to avoid the EU falling into the hands of Eurosceptics and populists. Regional and local leaders represent an added value within the EPP family: the local context very often represents the most tangible circle of belonging and the basis of democratic values. Across the EU there are about 90 000 local and regional authorities, including 311 regions, of which 75 are regional assemblies with legislative powers. Local and regional authorities implement 70% of all EU legislation. They represent 1/2 of public employment, 1/3 of public spending and 2/3 of public investment. The EU needs to make the most of the trustworthy know-how of local and regional politicians, who are best placed to ensure the full respect for subsidiarity and to connect the Union with its people in the places where they live, get educated, work, and experience good and bad times alike. Regional and local leaders can "Europeanise" local problems and find solutions at the EU level in fields such as digital economy, transport, energy, , and climate change, but also with regard to migration, security and the fight against terrorism. We are engaging in a genuine revival of the European project: our citizens must see that EPP leaders at European, national, regional and local levels are working hand in hand for them on the ground. People want a Europe based on local, regional and national realities: a Europe with a heart and a soul. The European Union needs to complement its own identity and values with the existing regional and national identities. People want to have a real say on a tangible EU that is delivering solutions. EU decisions must therefore be taken at political levels closest to citizens. We need to make their voices heard in Brussels, and Brussel's voice understood at home. Our citizens must see that the EPP is finding the right answers to urgent questions and delivering concrete benefits to people's daily lives.

We, the EPP family, at European, national, regional and local levels commit to an EPP grassroots engagement in order to increase confidence in and ownership of our European Union project. By launching a series of EPP local dialogues in all the EU Member States our objective is first to listen and engage with people. We want to make sure that their views and expectations are taken on board in the EPP programme for the 2019 elections, the priorities of the EPP Spitzenkandidat and the next political mandate of the EU institutions. As Europe is the place where we live in, under the motto "Europe starts in your village/city/region", we want to pass on a message of "unity in diversity" and of "thinking globally, acting locally". This will allow an honest dialogue with people on areas that are often decided upon in Brussels or in Strasbourg, but actually implemented in Europe's cities and regions. The aim should not be to build an alternative "Europe of the regions", but rather to enable a "Europe with the regions". _____________ 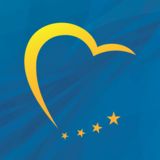 The launch event of the EPP Grassroots Engagement in view of the 2019 European Elections took place in Sofia, Bulgaria, on 9 March 2018. Thi...

The launch event of the EPP Grassroots Engagement in view of the 2019 European Elections took place in Sofia, Bulgaria, on 9 March 2018. Thi...