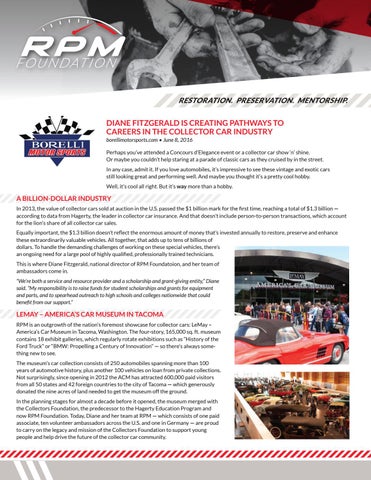 DIANE FITZGERALD IS CREATING PATHWAYS TO CAREERS IN THE COLLECTOR CAR INDUSTRY borellimotorsports.com • June 8, 2016 Perhaps you’ve attended a Concours d’Elegance event or a collector car show ‘n’ shine. Or maybe you couldn’t help staring at a parade of classic cars as they cruised by in the street. In any case, admit it. If you love automobiles, it’s impressive to see these vintage and exotic cars still looking great and performing well. And maybe you thought it’s a pretty cool hobby. Well, it’s cool all right. But it’s way more than a hobby.

A BILLION-DOLLAR INDUSTRY In 2013, the value of collector cars sold at auction in the U.S. passed the $1 billion mark for the first time, reaching a total of $1.3 billion — according to data from Hagerty, the leader in collector car insurance. And that doesn’t include person-to-person transactions, which account for the lion’s share of all collector car sales. Equally important, the $1.3 billion doesn’t reflect the enormous amount of money that’s invested annually to restore, preserve and enhance these extraordinarily valuable vehicles. All together, that adds up to tens of billions of dollars. To handle the demanding challenges of working on these special vehicles, there’s an ongoing need for a large pool of highly qualified, professionally trained technicians. This is where Diane Fitzgerald, national director of RPM Foundatoion, and her team of ambassadors come in. “We’re both a service and resource provider and a scholarship and grant-giving entity,” Diane said. “My responsibility is to raise funds for student scholarships and grants for equipment and parts, and to spearhead outreach to high schools and colleges nationwide that could benefit from our support.”

LEMAY – AMERICA’S CAR MUSEUM IN TACOMA RPM is an outgrowth of the nation’s foremost showcase for collector cars: LeMay – America’s Car Museum in Tacoma, Washington. The four-story, 165,000 sq. ft. museum contains 18 exhibit galleries, which regularly rotate exhibitions such as “History of the Ford Truck” or “BMW: Propelling a Century of Innovation” — so there’s always something new to see. The museum’s car collection consists of 250 automobiles spanning more than 100 years of automotive history, plus another 100 vehicles on loan from private collections. Not surprisingly, since opening in 2012 the ACM has attracted 600,000 paid visitors from all 50 states and 42 foreign countries to the city of Tacoma — which generously donated the nine acres of land needed to get the museum off the ground. In the planning stages for almost a decade before it opened, the museum merged with the Collectors Foundation, the predecessor to the Hagerty Education Program and now RPM Foundation. Today, Diane and her team at RPM — which consists of one paid associate, ten volunteer ambassadors across the U.S. and one in Germany — are proud to carry on the legacy and mission of the Collectors Foundation to support young people and help drive the future of the collector car community.

VISITING BORELLI MOTOR SPORTS AND DE ANZA COLLEGE In 2015, Diane traveled 57,000 miles to spread the word about the collector car industry and HEP’s activities — as well as to meet some of the recipients of the organization’s generous donations. In May, her travels brought her to the Bay Area where she toured De Anza College, which was awarded $10,000 for five scholarships designated for students who have a passion for collector cars and who maintain a certain grade point average. She also met with Borelli Motor Sports GM, Scott Tucker — who has been a big fan of Diane’s since being introduced to her last year at Monterey Car Week. De Anza has one of the top automotive programs in the area. The scholarship funds from HEP will be instrumental in helping some very deserving young men and women complete their education and acquire the skills necessary to restore and preserve collector cars.

De Anza College’s Auto tech club 2015 All 75 club members gathered on picture day. The club meets every Thursday morning before class. Scott’s interest in Diane’s organization comes from his active involvement in formal automotive education. In addition to being a a graduate of De Anza’s nationally known automotive program, Scott currently teaches a spring quarter class there on high-performance engine design. This is in addition to his job as full-time general manager at Borelli Motor Sports. “What Diane and her team are doing through RPM is absolutely vital to help prepare the next generation of craftsmen for the collector car industry,” Scott remarked. “Finding skilled, experienced techs to work on the meticulous restorations and complex builds we do here at Borelli Motor Sports has proven to be a real challenge. Since 2005, RPM and its predecessors have given close to $3 million in grants and scholarships to programs in 29 states. Hundreds of young people benefit from RPM’s assistance every year.” Dave Capitolo — who teaches engine repair, machining and remanufacturing at De Anza — led the college’s bid for scholarship money from RPM, and his progress report to Diane and RPM’s board will help determine whether those scholarships are renewed in the coming years at De Anza — as funds permit.

LEADING VOICE FOR COLLECTOR CARS Diane recognizes that she has become an important advocate — a leading voice for the collector car industry. “I often get asked by the parents of a 17- or 18-year-old whether there are truly careers in the collector car industry,” she commented. “I tell them that this is indeed a fast-growing industry that will last. The cars of today are the collector cars of tomorrow. And there are 12 million pre-1981 vehicles still on the road. These will require techs who understand the cars and enjoy working on historical novelties such as carburetors.” Going forward, Diane envisions RPM becoming even more of a key resource for schools, shops, students — and possibly clubs and collectors themselves. In addition to continuing to actively identify internships for students with a passion for working on collector cars, future activities could include getting even more involved in coaching students and even maintaining a job posting site for shops and technicians.