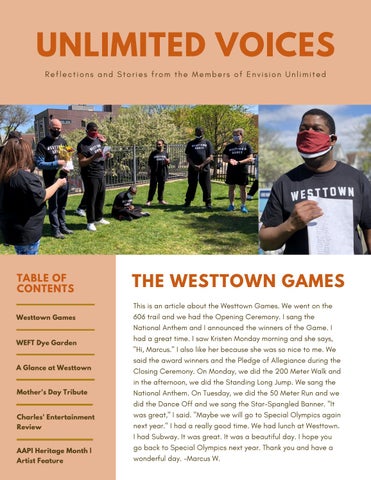 UNLIMITED VOICES Reflections and Stories from the Members of Envision Unlimited

THE WESTTOWN GAMES This is an article about the Westtown Games. We went on the

606 trail and we had the Opening Ceremony. I sang the National Anthem and I announced the winners of the Game. I

had a great time. I saw Kristen Monday morning and she says, "Hi, Marcus." I also like her because she was so nice to me. We said the award winners and the Pledge of Allegiance during the

A Glance at Westtown

Closing Ceremony. On Monday, we did the 200 Meter Walk and in the afternoon, we did the Standing Long Jump. We sang the

National Anthem. On Tuesday, we did the 50 Meter Run and we did the Dance Off and we sang the Star-Spangled Banner. "It

was great," I said. "Maybe we will go to Special Olympics again

next year." I had a really good time. We had lunch at Westtown. I had Subway. It was great. It was a beautiful day. I hope you

go back to Special Olympics next year. Thank you and have a

The Westtown Games are about having fun and competing in different events. All the clients went up on the 606 with the staff for

the Opening Ceremonies. We introduced ourselves to our guests. Mark McHugh, Tim Smith, the police officer Delila, and I did the torch run up there. We gave two awards to Mark McHugh and Tim Smith -

Be safe. Be supportive.

certificates with their names on them and flowers. Tim got the award for Volunteer of the Year 2020. I think he was nervous when he got it. We clapped for them. I was proud of him when he got that thing. My favorite event was when we did the race at Humboldt Park. We rode bikes with David, Jason, Mark, Mario, and Marcus to

the park. We went in the street after we made sure it's clear. We ran around the baseball field for the 50 meter race, then announced the winners. I got first place with William! We were tied. I had fun and

got two medals. Written by the Westtown Games planning committee

WESTTOWN GAMES By Geniel and Geneva B. Monday we went to the 606. We did 200 meters. I [Geneva] participated all by myself. My arms feel fine. I feel strong. I was killing it out there! We went on a walk to Simon's Park. We did the long jump and cheered. I [Geneva] won second place, silver! I [Geniel] got Gatorade and saved it for later. I bought a Honey Bun on the way home. I helped Hannah. I held her notebook. Tuesday we went to Humboldt Park. I clapped my hands like this for the team, for the run. We cheered with Andi. We saw ducks and they were trying to eat my face! We saw dogs with Ruthie when they were coming by. We had the dance off. We were dancing here at Westtown. Sophia played the music. Marcus told Sophia to play the music. I sang to "One, Two Step." It was fun!

DANCING FOR THE GAMES By Rosa M.

Games. My favorite part was JLo.

DANCE OFF By Vahid M. Tuesday we danced in the Westtown Games - me, Rosa, Ruth, Sophia, Marcus, Yesenia, Geneva, Geniel, and Christina. It was really fun! I said, "Come to join us, if you want." I did like a show, like dancing or shaking and looking at the camera. I moved my hips over here and then turned around. My favorite was Selena. Six feet distance for us if you have Covid. I said, "Six feet of distance, that's it." We wiped the table and chairs after the dance off and started eating. We got up from our chairs and put our hands over here on your heart and said the Pledge of Allegiance.

I helped Emily, Kendall, and Charles with the dye garden. It was a beautiful day that day. It was a great day for planting soil, planting flowers, planting plants. Emily says when we plant things in the planter box, for them it's like putting food in the refrigerator, meaning that when you put food in the refrigerator to keep it fresh, that's like when you give plants water they can grow. When you give them water, they drink the water. Then I went over by the street and got some sticks for planting. The sticks help the plants grow. Without the sticks, the soil wouldn't spread out as good. The sticks keep the soil moist and rich. I filled the planter box up with soil on top of the sticks. I would like to put some dirt in the small container box to make the flowers grow. I feel great because if people are happy from watering the plants, then that makes the plants happy.

Me and Kendall were fixing it for the plants, for the garden. We were using the drill and the hammer to put it in the wood and put together the box. Put the battery in the yellow box for the drill. Put the wood in front with the screwdriver. I helped paint the boxes pink and put paper inside. Put water and soil in the plant boxes. In the next months - June, July, or August, we're checking out the plant how she's feeling.

CINCO DE MAYO by Jamie P. I'm really happy because I am half Mexican and

It's a good treat. On Cinco de Mayo girls wear colorful dresses. This holiday celebrates the Battle of Puebla. People celebrate Mexican culture with parades and dancing. You can see people

We had a good time with the tacos and stuff for Cinco de Mayo. It was good, it was great. Everything turned out good. I served the lunches. I had the sauce - the green one and the red

outside celebrating anywhere. In Mexico they

one. Jamie served the onions and cilantro. Kasandra served the

have festivals and food. Sometime they ask a

tacos on the plate, and Jason did the meat. I had a good time

person, "Do you want to join?" People celebrate it more in the United States than Mexico. I'm so happy that we're having tacos for lunch!

On Sunday I made a zucchini cake. It's good. It's green. I made it with my mom. I went shopping Sunday. I bought clothes. I went walking for exercise.

listening to music. It was like a life experience.

Roses are red Violets are blue

I see my sister on Sunday. Been too long - my

sister didn't come to my house for a month.

and so are you

My mom asked my sister to take a test for Coronavirus or shot. Make sure to be safe to come to my house for Mother's Day. We will

Mom, I will always love you in my heart forever.

order food and watch movies at my house to

spend time with each other as a family.

My mom passed away a year back. She was a light-skinned lady. She used to be the farmer's daughter. My daddy met her somewhere in Chicago. My mama met my daddy. They lived on Christiana by the library. When my daddy met my mom, she had the 3 of us. She was pregnant with one boy and three girls, but one girl died.

If I knew how sick she was, I wouldn't have left her. I left my residential home because my mama got sick. I was at another workshop at Halas, then I went home after my mama was on the critical list. The lady said, "You better come home because your mama might not live."

My mother's name was Minnie, but they called her Minnie May. She was Minnie Holmes, then she was Patton because she married my daddy. She was nice. She cooked all them good meals. I miss her making that peach cobbler, sauerkraut, and homemade biscuits. She makes all kinds of stuff. She made dumplings. I love homemade dumplings. She's a good meal.

I go to the cemetery and visit her. I talk to my sister now about going to the cemetery. She lived a good time until it was time for her to go. I'm going to feel lost without her this Mother's Day.

EMERGENCY! Emergency! is a TV show about John Gage and Roy DeSoto. They are both paramedics. They drive Squad 51, their emergency vehicle. They help people if they're sick or if they're ill. Roy talks about his wife and different vacations they want to go on. He has kids too. They are good actors. They are a great team with their hospital, Rampart Hospital. They have a speaker box where they call it and talk to the doctors. My favorite is Dr. Brackett. He's a great doctor. He has an office. He goes there for conferences to talk about the paramedics program to bring more paramedics to the program. I like Dixie. She's my favorite too. She's a nurse. I think she's a great nurse. She's a tough nurse. Dixie and Dr. Brackett are a great team. The other doctor is Joe Early. He's a great doctor too. He helps out Dr. Brackett. He works very hard. He always asks for food. He's a great actor and in the paramedics program too. I like the stethoscopes they have. I like the stars on the show. I like the fire truck. I think Captain Henry is a great boss to Roy and John. I like the fire station. It's nice. There's a dog in there named Henry. He doesn't eat dog food. He just lays there. They try to get him up from the couch. My favorite episode is "The Hard Hours." Joe gets sick. They call the other doctors to check on how he's doing. He's feeling better and eating good food. I give it 5/5 stars because you see action and adventure!

CHARLES' ENTERTAINMENT REVIEW THE MARY TYLER MOORE SHOW The Mary Tyler Moore Show is a TV show about Mary being a co-producer on WJN-TV Minneapolis. Minneapolis is in Minnesota. Valerie Harper played Rhoda. Rhoda is funny. There's an episode where she cleans the windows of the apartment, but it was Mary's apartment, not her apartment. It was so funny. Ed Asner played Lou Grant, the boss. He's a tough boss. He gives ideas of what stories to use for WJN. He comes up with ideas. He always gets drunk and writes a letter to his wife. Ted Knight played Ted Baxter. He does the news. He can't say the names of the cities right. Ted Knight was also in Too Close for Comfort. He had the Cosmic Cow puppet. Gavin McLeod played Murray. He was also in The Love Boat as Captain Stubing. Murray types the news for Ted on the teleprompter. Cloris Leachman played Phyllis Lindstrom. She is Mary's friend. She has a daughter and a husband. She played Charlotte Rae in The Facts of Life. They go to different restaurants. She's kind of funny. She's a good friend, a good actress. I like the city Minneapolis where they do the show. It's a big city. They got bridges, stores. Mary throws her hat up in the air when she's walking in the city. A model did that trick. I like Mary's car. It was a Mustang. She drives it good. I like how she drives it. I like Mary's studio apartment. She's a good cook. I like the theme song, "Love is All Around." That's the name of the Pilot.

I give it 4 stars because it's funny to watch. Mary Tyler Moore and Valerie Harper died. We're going to miss them. 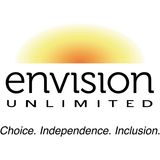