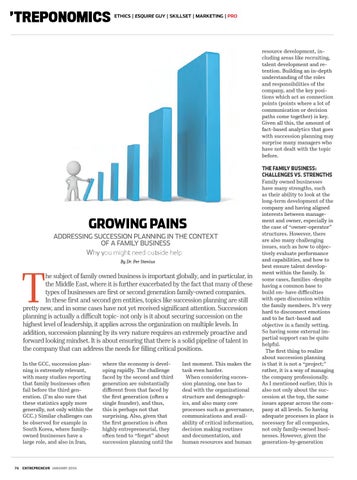 resource development, including areas like recruiting, talent development and retention. Building an in-depth understanding of the roles and responsibilities of the company, and the key positions which act as connection points (points where a lot of communication or decision paths come together) is key. Given all this, the amount of fact-based analytics that goes with succession planning may surprise many managers who have not dealt with the topic before.

By Dr. Per Stenius

he subject of family owned business is important globally, and in particular, in the Middle East, where it is further exacerbated by the fact that many of these types of businesses are first or second generation family-owned companies. In these first and second gen entities, topics like succession planning are still pretty new, and in some cases have not yet received significant attention. Succession planning is actually a difficult topic- not only is it about securing succession on the highest level of leadership, it applies across the organization on multiple levels. In addition, succession planning by its very nature requires an extremely proactive and forward looking mindset. It is about ensuring that there is a solid pipeline of talent in the company that can address the needs for filling critical positions.

In the GCC, succession planning is extremely relevant, with many studies reporting that family businesses often fail before the third generation. (I’m also sure that these statistics apply more generally, not only within the GCC.) Similar challenges can be observed for example in South Korea, where familyowned businesses have a large role, and also in Iran,

last moment. This makes the task even harder. When considering succession planning, one has to deal with the organizational structure and demographics, and also many core processes such as governance, communications and availability of critical information, decision making routines and documentation, and human resources and human

The family business: challenges vs. strengths Family owned businesses have many strengths, such as their ability to look at the long-term development of the company and having aligned interests between management and owner, especially in the case of “owner-operator” structures. However, there are also many challenging issues, such as how to objectively evaluate performance and capabilities, and how to best ensure talent development within the family. In some cases, families -despite having a common base to build on- have difficulties with open discussion within the family members. It’s very hard to disconnect emotions and to be fact-based and objective in a family setting. So having some external impartial support can be quite helpful. The first thing to realize about succession planning is that it is not a “project;” rather, it is a way of managing the company professionally. As I mentioned earlier, this is also not only about the succession at the top, the same issues appear across the company at all levels. So having adequate processes in place is necessary for all companies, not only family-owned businesses. However, given the generation-by-generation

The Executive Summary: In conversation with 107 opinion shapers of commerce, government and industry.

The Executive Summary: In conversation with 107 opinion shapers of commerce, government and industry.