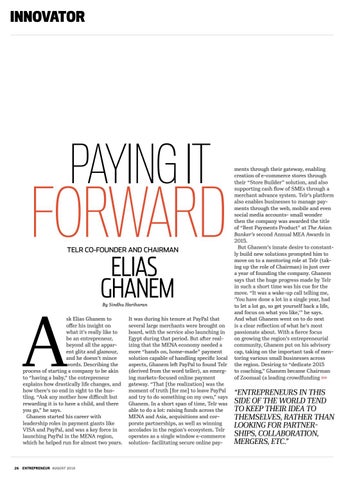 sk Elias Ghanem to offer his insight on what it’s really like to be an entrepreneur, beyond all the apparent glitz and glamour, and he doesn’t mince words. Describing the process of starting a company to be akin to “having a baby,” the entrepreneur explains how drastically life changes, and how there’s no end in sight to the hustling. “Ask any mother how difficult but rewarding it is to have a child, and there you go,” he says. Ghanem started his career with leadership roles in payment giants like VISA and PayPal, and was a key force in launching PayPal in the MENA region, which he helped run for almost two years.

It was during his tenure at PayPal that several large merchants were brought on board, with the service also launching in Egypt during that period. But after realizing that the MENA economy needed a more “hands on, home-made” payment solution capable of handling specific local aspects, Ghanem left PayPal to found Telr (derived from the word teller), an emerging markets-focused online payment gateway. “That [the realization] was the moment of truth [for me] to leave PayPal and try to do something on my own,” says Ghanem. In a short span of time, Telr was able to do a lot: raising funds across the MENA and Asia, acquisitions and corporate partnerships, as well as winning accolades in the region’s ecosystem. Telr operates as a single window e-commerce solution- facilitating secure online pay-

ments through their gateway, enabling creation of e-commerce stores through their “Store Builder” solution, and also supporting cash flow of SMEs through a merchant advance system. Telr’s platform also enables businesses to manage payments through the web, mobile and even social media accounts- small wonder then the company was awarded the title of “Best Payments Product” at The Asian Banker’s second Annual MEA Awards in 2015. But Ghanem’s innate desire to constantly build new solutions prompted him to move on to a mentoring role at Telr (taking up the role of Chairman) in just over a year of founding the company. Ghanem says that the huge progress made by Telr in such a short time was his cue for the move. “It was a wake-up call telling me, ‘You have done a lot in a single year, had to let a lot go, so get yourself back a life, and focus on what you like,’” he says. And what Ghanem went on to do next is a clear reflection of what he’s most passionate about. With a fierce focus on growing the region’s entrepreneurial community, Ghanem put on his advisory cap, taking on the important task of mentoring various small businesses across the region. Desiring to “dedicate 2015 to coaching,” Ghanem became Chairman of Zoomaal (a leading crowdfunding >>>

“Entrepreneurs in this side of the world tend to keep their idea to themselves, rather than looking for partnerships, collaboration, mergers, etc.”

The MENA fintech frontier: it’s revolutionizing the global financial services industry- and now fintech is making its presence felt in the M...

The MENA fintech frontier: it’s revolutionizing the global financial services industry- and now fintech is making its presence felt in the M...