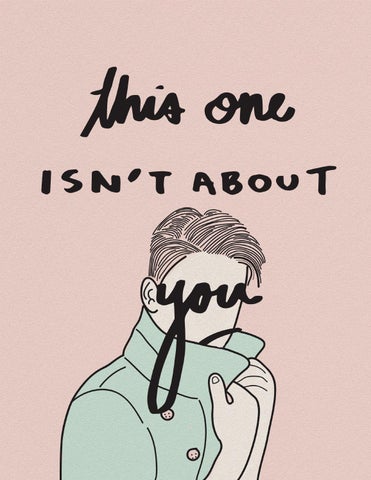 this one isn’t about you If you’re reading this, then you’re one of the chosen ones. Consider this as a privilege and please, don’t tell anyone about this, it’s for your eyes only. EB

pizza It was a rare moment on that day. My friends and I were eating in a crowded restaurant. He was slowly slicing his pizza while cracking a joke. I was savoring my chicken roll when I noticed something about him. I stopped and stared at him. The restaurant was suddenly silent and I found myself in a museum. The way he ate, the way he laughed, the way he talked - his actions were incomprehensible like the abstraction of impressionist paintings. He was like a piece of art that I have been staring at for too long. And I looked like a statue in his eyes.Then he asked, “Why are you looking at me like that?” I ignored his question and continued to eat, but in my mind I realized, “Fuck, I’m in love with this piece of art.”

new york he sees me in a different way like i’m an artwork, a masterpiece as i catch a glimpse of his brown, chinky eyes i saw the epitome of art and beauty he always brings his camera  he says he doesn’t want to let a beautiful moment pass i looked at his pictures  it was all pictures of me, in different angles he took me in a museum  he looked at me the way i look at an artwork  with feelings i couldn’t express in words he makes me feel things i’m not supposed to feel is this what art is?

a bed full of roses thorns lie underneath deceiving at first sight torturous when you felt it a taste of temporary bliss angel in disguise of light and wings horns in between an endless affliction open up my scars i chose you you didnâ&#x20AC;&#x2122;t choose me

i don’t want to lose you Her weight is on me and I never thought I can carry something this heavy. She is like a star full of nuclear fuel waiting to explode. If I let her go, I don’t think I can ever handle that. So I didn’t. I’m latching on to her as if I can still her shaking. I can feel her whole body trembling. She is starting to fall onto the ground and I swear, I badly wanted to let go. But my love for her is heavier than all the weight that she was carrying. I am no saviour, I am not perfect, but I promised her that I’ll be there to catch her when she falls.

She clutched on to my shoulders and stood up. She walked away without looking back. Everyone was waiting in silence, as if everyone understood her without saying a word. I wish I could say I understand her too, but I don’t. How can I handle something I don’t understand? There’s only so much emotional baggage I can take. So I let her go even if I told her that I love her. I let her go without trying to understand her. I wish things aren’t complicated and I wish things would go back to the way they used to be. But they are and they won’t.

When I got inside the car, my parents were furious about my phone bill. I have exceeded my monthly bill by a thousand. My mom showed me the bill and I saw your numbers imprinted all over the paper. All of our midnight phone calls were listed there. My mom asked, “Who are you talking to?” “It was just a friend. I didn’t know that the number was from another network. It was very important.” I said. Of course I knew your number is from another network. But I didn’t mind. She didn’t know I was planning to take my life every night. You were my life line and I just needed to call you. You are where I go to when I couldn’t stop shaking. And you made me still.

11:22 I clicked on your name and stared at my message. Alas! A green dot miraculously appeared beside your name. Every atom of me was hoping, wishing and wanting for your reply. I’ve been checking your name from time to time yet it’s been four days and still you haven’t replied. I remember asking you before, “Why aren’t you reading your messages?” You said, “Because I don’t want to, I just ignore them.” The last message I sent was my suicide note. I said, “If you won’t stop me, no one else will. I will wait for four days then I’ll do it.”

death “You’ve been wearing black ever since day one and you look like death.” I smirked. It was the first time my mouth formed a convex for weeks. I walked passed him and sat at my usual spot in class. Annoyingly, he followed me and sat beside me. He gazed at me like a hawk wanting to eat its prey. It made me feel so uncomfortable so I removed my shades, gently wiping my puffy eyes and said, “I wish I were death so I could bring my father back to life and take you with me instead.” I could feel his blood run cold and his flesh crawl. I was so sure he’ll never talk to me again. Before he left his seat, he said “I would love to kiss death to bring her father back.” He smirked afterwards.

i love you, goodbye

We were sitting in a coffee shop when he jokingly asked me, “Can I date your friend?” Annoyingly, the background music that was playing was You Belong With Me by Taylor Swift. I put down the coffee cup that I was holding and tapped my fingers on the table for a while. He was waiting for me to answer while he was drinking his mocha latte. Finally, I answered, “No you can’t date any of my friends.” He laughed as if he knew I was going to say no and then blurted out, “You can’t date any of my friends too!” I stared at him with a straight face. He really knows how to annoy me and it’s irritating. I replied, “That’s unfair! You have a lot of cute chinito friends.” He smirked and said, “Why can’t I just date you?” And just like that, he dropped a bomb in my heart and my feelings exploded. I don’t know what to say to him that wouldn’t hurt him. But I have to say something. “I don’t want a boyfriend. At least not now.” “Why don’t you want a boyfriend?” “I want to become a strong, independent woman first before getting into a relationship. Second, it’s not like you are financially stable or have savings in the bank-” He interrupted, “Actually, my family’s wealth can provide for the next three generations, so I think I’m financially stable.”

Wow, I never knew he was filthy rich. But I must not let him win. So I said, “I don’t think I’m ready for a relationship. Why can’t we just stay as friends?” We haven’t talked to each other for a month. I knew what I said would change how things used to be. The last message he sent was, “I will wait for you. And when you’re ready, I’m only one call away.” He hasn’t left my mind ever since that day. I went abroad to study for my Master’s degree. At least, that’s what everyone thinks. I just wanted to escape. I left him a message that I will send three weeks from now: I’m sorry it took me so long to send this message. I have been depressed for two years. I wanted to call you, but I didn’t want you to stop me from killing myself. I know you’re waiting for me but you have to find someone else who would love you because I can’t. By the time you finish reading this letter, my body would be discovered and my parents would know that I’m already dead. I’m sorry if you waited for nothing. And I’m a coward for not giving you a chance but I didn’t want to drag you into my world when I already wanted to end it. I’m sorry, I love you.

SO IS THIS ONE REALLY ISN’T ABOUT YOU? 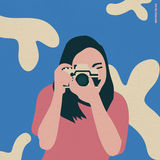 This One Isn't About You

This One Isn't About You