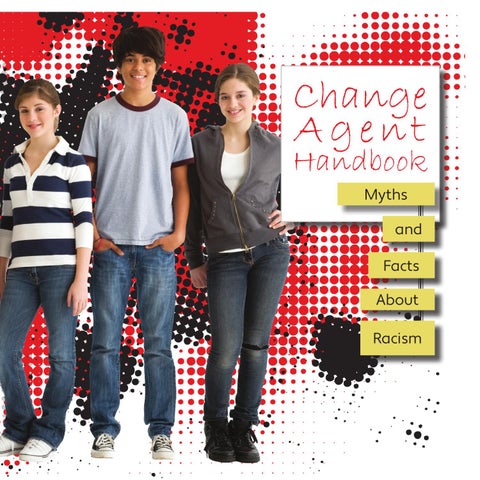 Handbook Myths and Facts About Racism

People do not like to think of racism. Racism is often ignored, denied or considered to be a negative word. Some people think that acknowledging the existence of racism makes them a racist. In fact, when you acknowledge that racism exists, you can be a person who opposes it!

If you ignore racism, you ignore the people who have experienced it in the past and those who continue to experience it today. Also, when racism is ignored it resurfaces as common misconceptions and myths, and some people may feel that there is nothing that can be done to prevent it. In reality, there are many things that you can do to prevent racism â&amp;#x20AC;&amp;#x201D; that is what being a Change Agent is all about! This handbook provides useful information, such as myths and facts about racism, questions to consider, and definitions that every Change Agent should know. Use this handbook to take your first steps to becoming a Change Agent and create positive change in your community!

A Change Agent is a person who has a sense of personal pride and accountability in creating positive change in their community. As individuals, they have the ability to prevent racism.

Racism is a thing of

When people think of racism, they will usually think of slavery in the United States, apartheid in South Africa or the Residential School System here in Canada. Resolution and apologies for racial oppression that occurred in the past can give the impression that racism is no longer a problem and that it does not exist anymore. In reality, racism still exists in many places, including British Columbia. It is experienced by people in different ways, including: • • •

Educate yourself about the history of racism and how it continues today.

is a scientific term

Race is a socially constructed term that reflects the idea that one group of people is superior to another based on traits such as skin colour, height and facial features. â&amp;#x20AC;&amp;#x153;Raceâ&amp;#x20AC;? is still used as a legal category in Canada even though it is recognized that race is not real. This is because people still experience discrimination and racism based on physical traits.

how differences such as skin colour can greatly affect how we experience day-to-day life. It is important to understand how these differences may change how people are treated by others.

Racism doesn’t exist in my

Racism takes many forms. Some forms of racism are unconscious, and affect all kinds of people every day in communities across British Columbia. Some subtle examples of racism include applying stereotypes to people or accepting “mild” racist behaviour such as jokes or slang, even when they are not said directly to a person. These subtle types of racism are often perceived as reasonable, understandable or acceptable because they are not as severe as other acts of racism such as hate crimes or discrimination. However, these subtle types of racism are just as detrimental because they validate racist behaviours and attitudes.

people in your community who may be different than you.

Stereotypes are not harmful

Stereotypes are building blocks for discrimination. Since we learn to identify with people who are similar to us at a young age, we can be easily taught to stereotype those who are different, which can lead to discrimination.

Have you ever heard the following phrase? “I’m not racist, but…” People often use stereotypes that generalize a person or a group of people based on their ethnicity, religion, ancestry or culture. These stereotypes can lead to prejudice and bias, which can become motivations for discrimination. Interact

with people in your community. You may find that generalizations about different groups of people are not accurate once you get to know them.

bones, but names will never hurt me”

All racism is hurtful. People who are victims of racial discrimination can often feel excluded, lonely, angry, sad and even uncomfortable participating in their communities.

those who experience racial discrimination.

I can say whatever I want to people

Yes it is true we have freedom of expression under Section 2 of the Canadian Charter of Rights and Freedoms. However, that right does have boundaries.

It is illegal to advocate genocide, publicly incite hatred or wilfully promote hatred based on national or ethnic origin, race, religion, colour and sexual orientation. Depending on the situation, the use of racist slurs may not be illegal under the Criminal Code of Canada. However the person using them may subject themselves to an investigation under federal human rights legislation. The use of such terms is not tolerated in Canadian society.

what makes us unique as British Columbians and as Canadians.

that you play in your neighbourhood, your school and your community and that you can prevent racism.

There is nothing I can do t0 eliminate

More information, tools and resources to help you toâ&amp;#x20AC;Ś educate

with others in your community to prevent racism in British Columbia.

Day for the Elimination of

On March 21, 1960 in Sharpeville, South Africa, police killed 69 people who were peacefully demonstrating against pass laws. Pass laws were legislated by the government of South Africa to segregate the white and nonwhite citizens by regulating the movement of black Africans in urban areas. The pass laws were a dominant feature of the countryâ&amp;#x20AC;&amp;#x2122;s apartheid system. The United Nations proclaimed the International Day for the Elimination of Racial Discrimination in 1966. Every year, March 21 is recognized as a day where the international community can come together in an effort to eliminate all forms of racial discrimination.

Definitions Anti-racism The practice of identifying, challenging, preventing, eliminating and changing the values, structures, policies, programs, practices and behaviours that perpetuate racism. Discrimination The practice or act of making distinctions between people on the basis of prejudicial attitudes and beliefs, which leads to the inequitable treatment of individuals or groups. Diversity The variety of characteristics that distinguish people as individuals and that identify them as belonging to a group or groups. Diversity is a concept that includes notions of age, class, culture, disability, ethnicity, family, sex, language, place of origin, race, religion, and sexual orientation, as well as other characteristics that vary among people and groups within society. Ethnicity Ethnicity is a social and political construct used by individuals and communities to define themselves and others. Specifically, â&amp;#x20AC;&amp;#x153;ethnicityâ&amp;#x20AC;? refers to a personâ&amp;#x20AC;&amp;#x2122;s cultural background, including his or her language, origin, faith and heritage. Ethnicity comprises the ideas, beliefs, values and behaviour that are transmitted from one generation to the next. It tends to be perceived in terms of common culture, history, language or nationhood. Ethnic identity and ethnicity are interchangeable terms. Hate An intense dislike of, and contempt for, another person or a group of people.

Definitions Hate/Bias crime A hate/bias crime is a criminal offence committed against a person or property which is motivated by the suspectâ&amp;#x20AC;&amp;#x2122;s hate, prejudice or bias against an identifiable group based on race, national or ethnic origin, language, colour, religion, sex, age, mental or physical disability, sexual orientation or any other similar factor (as defined in section 718.2 of the Criminal Code of Canada). Verbal intimidation, assault and vandalism are the most commonly reported types of hate crimes. Multiculturalism â&amp;#x20AC;&amp;#x153;Multiculturalismâ&amp;#x20AC;? refers to a society that recognizes, values and promotes the contributions of the diverse cultural heritages and ancestries of all its people. A multicultural society is one that continually evolves and is strengthened by the contributions of its diverse peoples. Prejudice A preconceived idea or judgment toward a group based on perceived ethnic or ancestral characteristics that result in a belief that members of that group are inferior. Privilege The experience of freedoms, rights, benefits, advantages, access and/or opportunities afforded to members of the dominant group in a society or in a given context, usually unrecognized and taken for granted by members of the majority group, while the same freedoms, rights, benefits, advantages access and/or opportunities are denied to members of the minority or disadvantaged groups.

Definitions Race Historically, “race” has represented the notion that there are biologically discrete “races” of human beings that can be ordered in terms of superiority of intelligence, sexuality and morality. However modern science has determined that no such biological distinctions exist among humans and that the term serves no useful scientific purpose. Today, “race” is often used to refer to a group of people of common ancestry, distinguished by physical characteristics such as colour of skin, shape of eyes, hair texture and facial features and to designate social categories based on such characteristics. Race is often confused with ethnicity. Racial discrimination As one of the many signatories to the International Convention on the Elimination of All Forms of Racism in 1969, Canada agreed to the following definition of racial discrimination found in Article 1: “Racial discrimination” shall mean any distinction, exclusion, restriction or preference based on race, colour, descent, or national or ethnic origin which has the purpose or effect of nullifying or impairing the recognition, enjoyment or exercise, on an equal footing, of human rights and fundamental freedoms in the political, social, cultural or any other field of public life. Racialization The process through which groups come to be designated as different, and on that basis, subjected to differential and unequal treatment. In the present context, racialized groups include those who may experience differential treatment the basis of race, ethnicity, language, economics, religion, culture, politics, etc.

Definitions Racism A set of mistaken assumptions, opinions and actions resulting from the belief that one group of people categorized by colour or ancestry is inherently superior to another. Racism may be present in organizational and institutional policies, programs and practices, as well as in the attitudes and behaviour of individuals. Stereotype A fixed mental picture or image of a group of people having the same characteristic(s) as all members of the group, regardless of their individual differences. It is an over-generalization, where the information or experience on which the image is based may be true for some of the individual group members, but not for all members. Stereotyping may be based upon misconceptions, incomplete information and/or false generalizations about race, age, ethnic, linguistic, geographical or natural groups, religions, social, marital or family status, physical, developmental or mental attributes, gender or sexual orientation. Systemic discrimination Systemic discrimination takes place via policies and practices which may appear neutral on the surface but in reality, exclude and discriminate against various minority groups â&amp;#x20AC;&amp;#x201D; be it intentionally or unintentionally. For example, systemic discrimination can occur through employment systems such as job requirements, hiring practices or promotion procedures, or as a result of some government laws and regulations. Visible minority The phrase â&amp;#x20AC;&amp;#x153;visible minorityâ&amp;#x20AC;? refers to groups who share physically visible characteristics such as dark skin. This is a term which specifically refers to a certain time and place, when it was true in Canada that people of colour were a minority relative to the majority of the population. The term visible minority, although remaining in some legislation, is quickly losing its relevance, as it is no longer applicable in our society due to changing immigration patterns. Currently, the phrase should be used with caution because it often excludes groups of people who commonly experience discrimination. It does not seem to include, for example, many Latin Americans, southern Europeans, or religious groups, such as Jews and Muslims.

This handbook provides useful information, such as myths and facts about racism, questions to consider, and definitions that every Change Agent should know. Use this handbook to take your first steps to becoming a Change Agent and create positive change in your community! Order your copy for free at www.EmbraceBC.ca 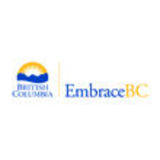