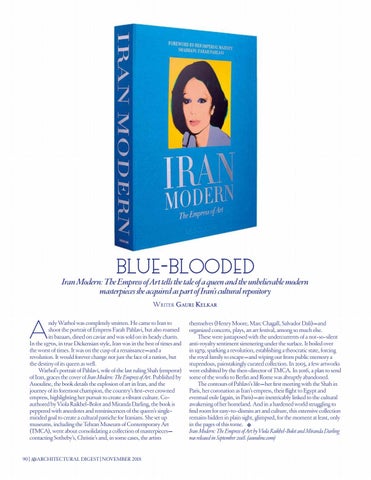 blue-blooded Iran Modern: The Empress of Art tells the tale of a queen and the unbelievable modern masterpieces she acquired as part of Iran’s cultural repository WRITER GAURI KELKAR

ndy Warhol was completely smitten. He came to Iran to shoot the portrait of Empress Farah Pahlavi, but also roamed its bazaars, dined on caviar and was sold on its heady charm. In the 1970s, in true Dickensian style, Iran was in the best of times and the worst of times. It was on the cusp of a renaissance—and a revolution. It would forever change not just the face of a nation, but the destiny of its queen as well. Warhol’s portrait of Pahlavi, wife of the last ruling Shah (emperor) of Iran, graces the cover of Iran Modern: The Empress of Art. Published by Assouline, the book details the explosion of art in Iran, and the journey of its foremost champion, the country’s ﬁrst-ever crowned empress, highlighting her pursuit to create a vibrant culture. Coauthored by Viola Raikhel-Bolot and Miranda Darling, the book is peppered with anecdotes and reminiscences of the queen’s singleminded goal to create a cultural pastiche for Iranians. She set up museums, including the Tehran Museum of Contemporary Art (TMCA), went about consolidating a collection of masterpieces— contacting Sotheby’s, Christie’s and, in some cases, the artists

themselves (Henry Moore, Marc Chagall, Salvador Dalí)—and organized concerts, plays, an art festival, among so much else. These were juxtaposed with the undercurrents of a not-so-silent anti-royalty sentiment simmering under the surface. It boiled over in 1979, sparking a revolution, establishing a theocratic state, forcing the royal family to escape—and wiping out from public memory a stupendous, painstakingly curated collection. In 2005, a few artworks were exhibited by the then-director of TMCA. In 2016, a plan to send some of the works to Berlin and Rome was abruptly abandoned. The contours of Pahlavi’s life—her ﬁrst meeting with the Shah in Paris, her coronation as Iran’s empress, their ﬂight to Egypt and eventual exile (again, in Paris)—are inextricably linked to the cultural awakening of her homeland. And in a hardened world struggling to ﬁnd room for easy-to-dismiss art and culture, this extensive collection remains hidden in plain sight, glimpsed, for the moment at least, only in the pages of this tome. Iran Modern: The Empress of Art by Viola Raikhel-Bolot and Miranda Darling was released in September 2018. (assouline.com)