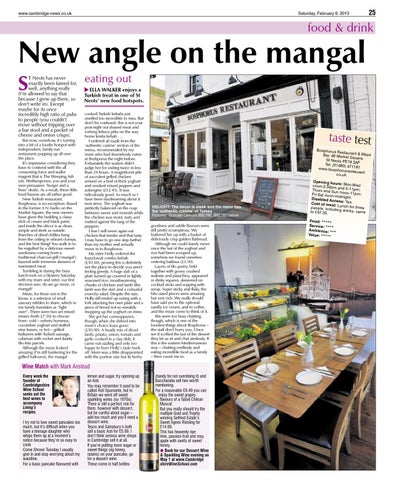 New angle on the mangal

But now, somehow, it’s turning into a bit of a foodie hotspot with independent, family-run restaurants popping up all over the place. It’s impressive considering they have to contend with the all consuming force and wallet magnet that is The Weeping Ash (ah, Wetherspoons, you and your ever-persuasive ‘burger and a beer’ deals). As a result, these little food havens are all rather good. New Turkish restaurant, Bosphorus, is no exception. Based in the former A N Audio on the Market Square, the new owners have given the building a classy slick of cream and black paint, and inside the décor is as clean, simple and sleek as outside. Bunches of dried chillies hang from the ceiling in vibrant clumps, and the best thing? You walk in to be engulfed by a delicious sweetsmokiness coming from a traditional charcoal grill (‘mangal’) layered with immense skewers of marinated meat. Tumbling in during the busy lunch-rush on a blustery Saturday with my mum and sister, our first decision was: do we go meze, or mangal? Meze, for those not in the know, is a selection of small savoury nibbles to share, which in my family translates as “fight over”. There were two set mixed mezes (both £7.50) to choose from: cold – velvety hummus, cucumber yoghurt and stuffed vine leaves, or hot – grilled halluomi with Turkish sausage, calamari with rocket and dainty filo feta parcels. Although the meze looked amazing (I’m still hankering for the grilled halloumi), the mangal

T Neots has never exactly been famed for, well, anything really (I’m allowed to say that because I grew up there, so don’t write in). Except maybe for its once incredibly high ratio of pubs to people (you couldn’t move without tripping over a bar stool and a packet of cheese and onion crisps).

cooked Turkish kebabs just smelled too incredible to miss. But don’t be confused: this is not your post-night out shaved meat and iceberg lettuce pitta on the way home kinda kebab . . . I ordered ali nazik from the ‘authentic cuisine’ section of the menu, recommended by my mum who had shamelessly eaten at Boshporus the night before. Fortunately the waiters didn’t judge her for visiting twice in less than 24 hours. A magnificent pile of succulent grilled chicken arrived on a bed of thick yoghurt and smoked mixed peppers and aubergine (£12.45). It was ridiculously good. So much so I have been daydreaming about it ever since. The yoghurt was perfectly balanced on the cusp between sweet and moreish while the chicken was moist, tasty and melted against the tang of the peppers. I fear I will never again eat chicken that tender and that tasty. I may have to go one step further than my mother and actually move in to Bosphorus. My sister Holly ordered the kuzu/tavuk combo kebab (£10.50), proving this is definitely not the place to decide you aren’t feeling greedy. A huge slab of a plate turned up covered in lightly seasoned rice, mouthwatering chunks of chicken and lamb (the lamb was the star) and a colourful crunchy salad. Despite the size, Holly still ended up eating with a fork attacking her own plate and a piece of bread not-so-sneakily mopping up the yoghurt on mine. She got her comeuppance, though, when she delved into mum’s choice kuzu guvec (£10.90). A heady mix of diced lamb, potato, onion, tomato and garlic cooked in a clay dish, it came out sizzling and only too happy to burn Holly’s taste buds off. Mum was a little disappointed with the portion size but its herby

DELIGHT: The decor is sleek and the menu has the ‘authentic cuisine’ of Turkey Pictures: Duncan Lamont 892786, 892792 below

goodness and subtle flavours were still pretty scrumptious. We buttered her up with a basket of deliciously crisp golden flatbread. Although we could barely move once the last of the yoghurt and rice had been scooped up, somehow we found ourselves ordering baklava (£3.50). Layers of filo pastry, held together with gooey crushed walnuts and pistachios, appeared in dinky squares, skewered on cocktail sticks and sopping with syrup. Super sticky and flaky, the bite-sized pieces were amazing but very rich. We really should have said yes to the optional vanilla ice cream, and to coffee, and the meze come to think of it. We were too busy chatting, though, which is one of the loveliest things about Bosphorus – the staff don’t hurry you. Once we’d scoffed the last of the dessert they let us sit and chat aimlessly. If this is the eastern Mediterranean way – chatting endlessly and eating incredible food as a family – then count me in.

Wine Match with Mark Anstead Every week the founder of Cambridgeshire Wine School seeks out the best wines to accompany Living’s recipes. I try not to love sweet pancakes too much, but it’s difficult when you have a teenage daughter who whips them up at a moment’s notice because they’re so easy to cook. Come Shrove Tuesday I usually give in and stop worrying about my waistline. For a basic pancake flavoured with

lemon and sugar, try opening up an Asti. You may remember it used to be called Asti Spumante, but in Britain we went off sweet sparkling wines (so 1970s). There is still a perfect role for them, however with dessert, but be careful about sugar – add too much and you’ll need a dessert wine. Tesco and Sainsbury’s both sell a basic Asti for £5.99. I don’t think serious wine shops in Cambridge sell it at all. If you’re putting more sugar or sweet things (eg honey, raisins) on your pancake, go for a dessert wine. These come in half bottles

(handy for not overdoing it) and Bacchanalia sell two worth mentioning. For a reasonable £6.49 you can enjoy the sweet grapey flavours of a Tabali Chilean Muscat. But you really should try the multiple Gold and Trophy winning Seifried Estate’s Sweet Agnes Riesling for £14.99. This has heavenly ripe lime, passion fruit and rosy apple with swirls of sweet honey. ● Book for our Dessert Wine & Sparkling Wine evening on May 1 at www.Cambridge shireWineSchool.com 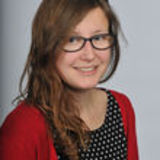