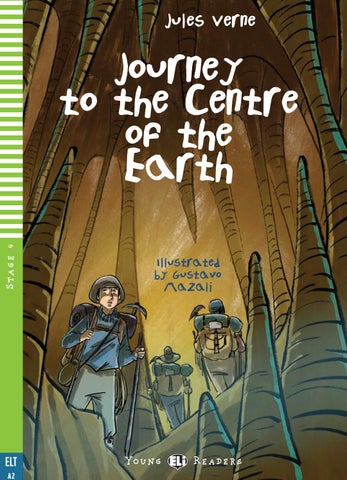 Journey to the Centre of the Earth Jules Verne was a master of adventure stories. He also wanted children to think about nature. This story asks them to wonder what is under the ground and if there is another world there. It is told by a young man, Axel, who with his uncle and a guide go down under the Earth through the crater of a volcano. The children follow them through tunnels and caves to find strange plants and animals and have exciting adventures. It’s a story about natural phenomena, but also about persistence, initiative and courage in the face of the unknown.

In this reader you will find: - Games and language activities - An audio recording of the story - A picture dictionary Tags Curiosity about the natural world

Journey to the centre of the Earth

JOURNEY TO THE CENTRE OF THE EARTH

Jules Verne wrote ourney to the Centre of the Earth more than 150 years ago. He also wrote Around the World in Eighty Days and Twenty Thousand Leagues Under the Sea. His stories were all exciting adventures. He is often called the ‘Father of Science Fiction’. Who was Jules Verne? He was born in a town near the sea in France. When he was a child he watched the ships and imagined their adventures. There’s a story that his father stopped Jules Verne from running away to sea to have adventures himself! His father wanted him to be a lawyer but, Jules Verne wanted to write books. In the end, that’s what he did. He wanted to share his passion for science and experiments. In ourney to the Centre of the Earth he says, ‘Science is made up of mistakes, but these are useful as they lead little by little to the truth.’

Meet the characters Professor Otto Lidenbrock: A famous and very enthusiastic scientist. Nothing is too difficult or too dangerous for him and he is determined to get to the centre of the Earth. Axel: An orphan, he lives with his uncle, Professor Lidenbrock. He is afraid of the dangers they find under the ground but he stays with his uncle and helps him when he can. Hans: A guide from Iceland. He is very big and strong and is good at making things with his hands. He doesnâ&#x20AC;&#x2122;t talk very much but he is kind and clever. Hans is very important for the success of the journey.

3 CHAPTER 1: Into the volcano

I live with my uncle, the famous geologist Professor Lidenbrock. Our journey to the centre of the Earth started one day when he was reading a very old book from Iceland. Suddenly, a piece of paper fell out. It was a letter with strange writing. My uncle couldn’t read it but I could. The words were in reverse order. It was from a man who lived five hundred years ago. His name was Arne Saknussemm. It said, ‘Go down the volcano of Snaefells Yoculand and you will come to the centre of the Earth. I did it myself.’ ‘Pack our bags!’ said my uncle, ‘We’re going to Iceland.’ I thought, ‘Oh no! Down a volcano? I don’t like that idea!’

4 But my uncle loves adventures and that

is exactly what we did. We found a guide called Hans and went to the Snaefells Yoculand volcano. We started climbing down into the volcano. It was very cold. ‘I hope we don’t find anything!’ I thought.

But at the bottom there were three chimneys… and on one of them were the letters A S. ‘I knew we were right! I knew this was the volcano! Arne Saknussemm was here!’ called my uncle. ‘Hurry up Axel! We’re on our way to the centre of the Earth!’ I looked at Hans but he didn’t say anything.

5 CHAPTER 2: Down the tunnel

At the bottom of the chimney there was a tunnel. My uncle started walking down it with Hans following. I looked up at the tiny circle of blue sky and thought, â&#x20AC;&#x2DC;Goodbye sky! When will I see you again?â&#x20AC;&#x2122; Then, I lit my lamp and went into the tunnel behind them. 8

The environment we went into was very different and new. Sometimes the tunnel was wide but sometimes it was narrow and we had to crawl along it. Sometimes it glittered with minerals like jewels. The walls of the tunnel were hot and the air smelled like bad eggs. ‘It’s sulphur,’ said my uncle, ‘from the volcano.’

Journey to the center of the earth

Journey to the center of the earth