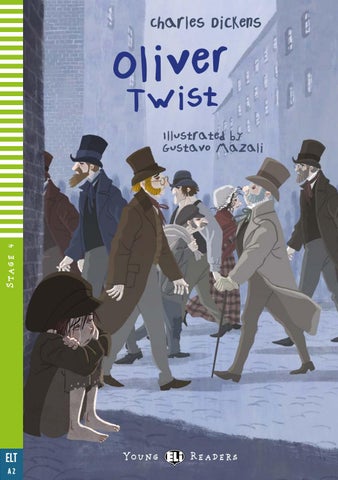 Oliver Twist This is perhaps the most well-loved story by Charles Dickens. Dickens asked his readers to ‘have a heart that never gets hard’. As readers follow the life of Oliver Twist, a poor orphaned boy struggling against the dangers of life in 19th-century London, they can empathise with his childhood in a workhouse and his life with a gang of pickpockets. They can also share his relief that there were some good people, ready and willing to rescue a child in need.

hundred years ago. Life was very difficult for poor children, and there were many poor children! Very poor people lived in special houses called workhouses, where families couldn’t be together and they had very little to eat. There wasn’t much difference between a workhouse and a prison! WHO WAS CHARLES DICKENS? When Charles Dickens was a child, his father was put in prison. He left school and worked in a factory to help his family. When his father left prison, Charles Dickens went back to school but he never forgot that difficult time. Charles Dickens was a kind man and he wanted people to know about the terrible life of poor people. Here is a message from Charles Dickens: ‘Have a heart that never gets hard.’

3 MEET THE CHARACTERS IN THE STORY

Oliver Twist: The hero of the story

Mr Bumble: The unfriendly head of the workhouse

The Artful Dodger: A boy in Fagin’s gang. He got his name because he is the best thief!

Fagin: The horrible head of the gang of child thieves

Nancy: A girl in Fagin’s gang

Rose: A kind young woman from the countryside

Mr Monks: A man who knows about Oliver Twist’s past

4 Oliver Twist was an orphan. He had no mother

or father but grew up in a workhouse with other poor children. They were always cold and hungry. One day, the children were eating a small bowl of watery soup in the dining room.

Mr Bumble, the head of the workhouse, was putting away the extra soup when Oliver Twist said, ‘Please, sir. I want some more...’ Mr Bumble couldn’t believe his ears. ‘WHAT DID YOU SAY?’ he shouted and began to hit Oliver with a big soup spoon.

5 Mr Bumble was so angry that the next day he

sent Oliver to work for an undertaker. Oliver was only 10 years old but he had to work hard. There was an older boy who worked there too, but he was unkind. Oliver was very unhappy! One morning, Oliver decided to run away and go to London. He thought, â&#x20AC;&#x2DC;No one, not even Mr Bumble, will find me in London!â&#x20AC;&#x2122; He started walking.

6 One day he saw a boy. He was whistling and

he looked very funny! He was wearing a man’s hat and a coat that came nearly to his feet! The boy smiled at him and said, ‘You can call me the Artful Dodger. If you want to have dinner and sleep in a nice bed, come with me.’ Oliver wanted both those things so he followed him.

7 The Artful Dodger took Oliver to a dirty room in

3 Write the names and match the people to what they are thinking.

‘Oh no! The Artful Dodger is a thief!’

Choose the right verbs to complete Oliver Twist’s song and write them in the past form. Then, listen to the song and check. want • choose • take • go • catch • say • decide can • need • push • tell • hear • look for