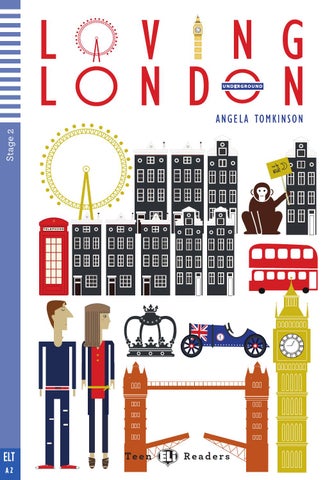 In this reader you will find: - Glossary of difficult words - After reading activities - An audio recording of the book

Who wants to go on a trip to London? You? Then join us on our A-Z journey through this ancient and modern city. It’s a city which is full of surprises and there’s always something to see and do in this exciting capital. If you like art or nature, sport or culture, food or museums then this is the place for you! So, what are you waiting for? Let’s start our journey now and discover everything there is to know about London!

2 In London you can find many different types of art _ traditional,

modern, contemporary, street art and lots more. You can visit one of the many art galleries that London has to offer like the National Gallery or the Tate Modern or just walk around the streets finding some kind of art on every street corner. So let’s find out more! The front of the Tate Modern

Street Art Walking round the area of East London you can see the work of more than 40 street artists. Street art includes graffiti and sculpture. Artists use this kind of art to give a message and show how they feel. You can pay to go on a tour with guides who explain the different artwork and what it means. And every time you go back to the area you’ll find something new that wasn’t there before.

Banksy Around London there is lots of different artwork by the famous British graffiti artist called Banksy. In 2010, Time magazine named him as one of the world’s most important people, but nobody knows his real identity*. We never see him in public*, but he always puts his name on his work. His graffiti is sometimes funny and usually has an important message. His work sells for a lot of money. 6

Pop-Up Art Galleries In the last few years new kinds of art galleries have arrived in London. Theyâ&#x20AC;&#x2122;re temporary* galleries that use empty buildings and shops. They are created quickly, stay open for a short time and then close again. Young artists can show their artwork and visitors can buy a painting if they find something they like.

Unusual Art Galleries In London you can also see art in some very unusual places. For example, a cemetery, a public toilet, a platform of Hackney Downs train station in east London, a car park in Peckham in south-east London and the crypt under St Pancras Church in north-west London have all had art shows! identity: who you are in public: in the streets temporary: for a short time

of fun and there’s always something to do. From traditional to modern, exciting events you’ll never be bored in this city!

Everyone loves the carnival

The carnival takes place every year in Notting Hill, London. It’s on for 3 days in August and has existed for almost 50 years. The West Indian community of London organises the festival and about a million visitors go to watch the event. It’s certainly one of the biggest street festivals in the world. There’s music, dancing, food and lots of fun!

Great Christmas Pudding Race This unusual event takes place every year at the beginning of December in Covent Garden. All you need is a team of 6 people, a costume and a Christmas pudding, the usual dessert that British people eat at Christmas. You have to run over obstacles while carrying a Christmas Pudding on a plate. This event has existed since 1980, and the money they make from it is for charity.

Dino Snores Would you like to spend a night sleeping near a big dinosaur? Well, your dream can come true at the National History Museum in London. Once a month, an event is organised in the dinosaur part of the museum where people can spend the night inside. The event starts early evening with various activities about the world of dinosaurs and then at midnight everyone goes to bed! But don’t be afraid, if you hear some strange noises during the night … maybe it’s only the person next to you who is snoring*! 15

Would you like to join in the pillow fight?

Pillow* Fight Day When? April every year. Where? Trafalgar Square. Who? Anyone can join in. What mustn’t you do? Don’t hit anyone who hasn’t got a pillow and don’t hit anyone who’s using a camera. Do you think it sounds fun? Come along and join in!

snoring: a noise some people make when they are sleeping pillow: you put your head on this soft thing in bed

Where can you find an unusual art gallery in London? Unscramble the anagrams below! 1 TREMYCE

Match the names of the buildings with their descriptions.

c It isn’t a real house

4 ■ The smallest house in London

d It was desi gned by an Italian architect

b Only one person has ever lived there

Decide if each sentence is correct. Put A if it is correct, B if it is incorrect.

1 The City’s nickname is the Square Kilometre.

Imagine you are on a school trip at the London Dungeons. Send a postcard to your family telling them about what you’re doing and what you can see there. Write about 50 words.

Can you match each event with where and when it takes place? Event

Be a film director! With your classmates think of an idea for a new film about London! Choose the place where your film is set, the people in the film, the story and how much money you have to spend for the film, then present your idea to the class. Who has the best idea?

Can you answer the questions about Greenwich? 1 What does GMT stand for? 2 Which line is Greenwich on? 3 What’s the Palace of Placentia? 4 What’s Greenwich’s connection with the sea? 5 Why is Nauticalia the first shop in the world?