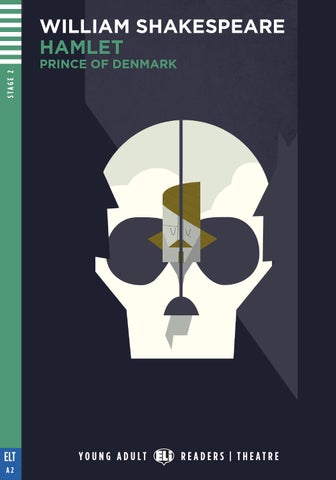 Eli Readers is a beautifully illustrated series of timeless classics and specially written stories for learners of English.

In this reader you will find: - William Shakespeare and the Elizabethan Theatre - Hamlet in the 20th and 21st centuries - Glossary of difficult words - Comprehension and extension activities including Key (KET) activities - Final test

After Hamlet sees his father’s ghost, he begins to act in a strange way. He now knows the terrible secret of his father’s death and must decide what to do. Many people think he’s become mad. Is it true? Will he do what his father’s ghost asks? And what about love? Will he lose Ophelia’s love for him? Read the play and see how Hamlet’s life changes and how it changes the lives of the people around him.

Complete these questions about Act 5 with a word or expression from the box. Then, match the questions to the right answers.

into a glass of wine. a letter. funny ones. because she drank the poison.

Unscramble these verbs from Act 5.

William Shakespeare and the Elizabethan Theatre William Shakespeare: Life and Works William Shakespeare was born in Stratford-upon-Avon, England in April, 1564. He was the eldest son of a big family; he had seven brothers and sisters, but three of them died when they were still children. William loved reading and studied Latin writers at a school near his home. Then, in 1582, he got married to Anne Hathaway, who was 26, eight years older than he was. They had three children. In 1584, Shakespeare left Stratford and went to London, where he started working as an actor. Then, he became a playwright* and wrote for a drama* company called The Lord Chamberlain’s Men. In 1559, this company built the Globe Theatre where people went to see his plays. He wrote most of his plays between 1589 and 1613. The first plays he wrote were historical, usually about English history. Then he moved on to comedies about love. Finally, he wrote his great tragedies like Hamlet. Some people say that Shakespeare got the idea for Hamlet from a very old Scandinavian story called Amleth. Many playwright a person who writes plays

people also believe that Kronborg Castle in the town of Helsinger, Denmark, is ‘Elsinore’ in Hamlet. Elsinore is actually the English name for Helsinger. Everybody loved Shakespeare’s plays and he became very popular. You can find all different kinds of people in his plays, from kings to cooks, and his stories are often about family problems between father and child, brother and sister, or husband and wife. Shakespeare was different from most playwrights because he was both an actor and a playwright and wrote many more plays than the others. After many years in London, in 1613, he went back to his hometown, Stratford-upon-Avon, where he died in 1616 at the age of 52. drama a story acted on stage

The Elizabethan Theatre This period*, known as the Golden Age, was a time of new ideas and new learning, Elizabeth I was Queen of England and she enjoyed drama very much, like the ordinary people of that time. At first, plays were performed* in the streets. Then, in 1567, the first English theatre was built in London, and was called The Red Lion. These large, open-air theatres were made of wood and had no roof. They were built in a circle with the stage in the centre. The plays were performed during the day and the people could sit around three sides of the stage to watch it. There were very few things on stage and there was no curtain.

Playwrights and Drama Companies All playwrights in the Elizabethan period were men. Drama companies paid playwrights to write a play, but the playwright only received the money for the first show. After that, the play belonged to the theatre company and the playwright made no more money from it. Most playwrights wrote two plays a year. The members of these drama companies were men only, so all parts for women were played

by young boys in womenâ&#x20AC;&#x2122;s clothes. The actors worked six days a week and changed the play every two days. Since costumes were expensive, actors, above all those with a less important part, often wore their normal clothes on stage. Each company performed between thirty and forty new plays a year.

Task â&#x20AC;&#x201C; Internet Look on the Internet. Try to find three examples each of Shakespeare's tragedies, comedies and historical plays, then complete the table below. Tragedies

What kind of play do you prefer? Give reasons. period a time in history