Giving the Gift of Art Education, Celebrating 10 Years of Scholarship Giving at the Eliot School 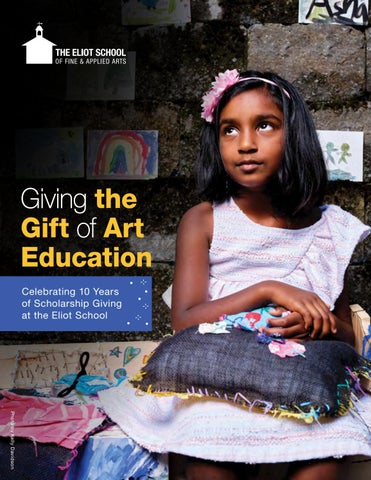 To make a contribution of any size to the Eliot School Scholarship Fund, please visit our website eliotschool.org or NetworkforGood.org. To establish a Named Scholarship in honor/memory of a loved one or someone you esteem, please contact: Titi Ngwenya Director of Development &amp; Communications tngwenya@eliotschool.org 617.553.9206

Our Scholarship Fund began with an initial gift of $25,000 from a faithful donor. With countless unrestricted donations from individuals and local businesses and the establishment of 12 Named Scholarships, the fund has grown during its first ten years to over $470,000. In that time, 243 scholarship recipients have taken 991 classes. Taking a particular class holds profound meaning to different members of the Eliot School community. Our scholarships help our community explore the joy and discovery that art-making can bring, strengthening our resolve to inspire craft and creativity for all.

A scholarship helped Swati and her daughter Asha feel supported and welcome. Swati Rani enrolled her daughter Asha in the Eliot School’s Summer Program for Children. It was the perfect experience for both mother and daughter. “After being fully remote in the

ways, but in other ways I’m kind of

pandemic, my priority for my daughter

on the margins as a brown woman of

was social interaction and a healing

space where art and materials were

development are important, so my

the focus. The Summer Program was

daughter feels like she is a part of this

that space. I’m a single mom and

an adjunct professor with a limited

income. This has been a hard year for us. The Eliot School scholarship was a big piece of really feeling supported.

The day I dropped Asha off at the school, I sat in the car, turned on some Nina Simone, and just cried. I exhaled

and felt like ‘the village is taking care of

active in our community in many

A scholarship was the key to unlock Angel’s identity as an artist. Angel Ortiz’s high school did not have art classes. He learned that in the arts, if you don’t fit in the box, that’s a good thing. “I work for Warner Brothers doing

Through art-making, you can explore

quality assurance for Game of

who you want to be. That creative

Thrones. My goal is to be a technical

animator. The Eliot School was

And I learned that I wasn’t straight,

a tipping point for me. Boston Latin

I liked what I liked, and that was okay.

so I took classes at the Eliot. While

Even if you don’t want to study art in

a professional capacity, I think art is a

where I was. After ninth grade,

good way to learn more about yourself.

I transferred to Boston Arts Academy.

When I was younger, I wasn’t aware

I had a scholarship. In hindsight, I don’t know how much of the Eliot I could have experienced without it.”

A scholarship led Sister Mary Joseph to over a decade of closer connection to family and community Sister Mary Joseph Peterson has belonged to the Daughters of St. Paul convent since 1979, where she took a vow of poverty. With Eliot School scholarships, she has attended woodworking classes religiously for twelve years. “In 2009, I signed up for my first woodworking class. This was my creative outlet and a chance to get out of the house. I was struck by the openness and the simplicity and community. Season after season, different woodworkers came through the Open Studio; a kind of Photo by Kelly Davidson

I was not making music boxes before

the Eliot. Growing up, my dad was

between spirituality and art.

a carpenter. He built houses and

Being able to make something

made furniture. I had an attraction

with my hands helps me feel

to wood, but I hadn’t explored it.

I discovered a fascination with making

and often brings back memories

made many music boxes for family members and given them away.

In memory of Tim Ingles

In honor of Marilyn Mase

In honor of Nicole Murray

In memory of Maggie Hill

Maggie Hill had a passion for turning used and old furniture into treasures. She took her first Eliot School class at the age of 26, at the start of her lifetime career as a Boston Public School teacher, and continued for more than four decades. Classes gave Maggie a space for relaxation and community. With an eye for rare finds abandoned on the street, she embraced furniture restoration and upholstery. She refurbished almost everything in her home, then gave beautifully restored furniture to family and friends. Throughout, she was active in her church and neighborhood, participating in missionary travels to Haiti and establishing a community garden next to her Mattapan home.

Maggie loved making by hand. After being diagnosed with cancer, finding it hard to transport big armchairs and dressers, she turned to sewing slipcovers, cushions, and curtains. Scholarships allowed her to continue taking classes until the age of 73. The Eliot School community created the scholarship fund in her name to pass along her loving, generous spirit.

In memory of Kendric Price

The son of long-time Eliot School sewing teacher, Carol Price, Kendric Price lent his charm, idealism and warmth to school events over the years. He was a skilled athlete, a visionary, and a caring and creative youth. Kendric played basketball on a Big Ten scholarship at University of Michigan and later with the NBA’s D-League and the Harlem Wizards. He worked as a financial analyst and as a basketball coach. He was assistant coach at University of Massachusetts Boston and Roxbury Community College, and coach at Brooke Charter High School and several local youth teams in Boston. He founded Big Business Network to teach inner city boys the basics of business and finance,

using basketball to build connections with each other. In a 2012 Boston Globe article about Big Business Network, Kendric said, “I’m not saying I can change the world, but I’m planning to make a difference one child at a time.” Kendric’s life was taken in the spring of 2019. Hundreds of Eliot School students and teachers contributed to create this scholarship in his name.

In memory of Neal Widett

Neal M. Widett was a master craftsman with a desire and talent for creating beautiful objects and well-designed furniture. Many knew him as a tireless creator with a robust sense of humor and a big heart. Neal was best known for his work as a sign maker, and for his trademark “Widett Cleat,” which he used to hang his signs. His distinctive, handcarved signs with hand-gilded lettering adorned Charles Street and the Beacon Hill landscape by the dozens, adding to the unique character of that neighborhood—and throughout Boston.

Neal made his first sign for Gary Drug in 1976. At the time, he was living and working as a furniture maker on Charles Street. Word spread quickly and his sign business grew. In 1987, he needed a gilder to leaf his lettering, so he hired artist Janet (“JJ”) Lomartire, who later became his wife. Neal’s scholarship was established by his friends, his Pi Lambda Phi fraternity brothers, fellow woodworkers, and family.

To make a contribution of any size to the Eliot School Scholarship Fund, please visit our website eliotschool.org or NetworkforGood.org. To establish a Named Scholarship in honor/memory of a loved one or someone you esteem, please contact: Titi Ngwenya Director of Development &amp; Communications tngwenya@eliotschool.org 617.553.9206

Giving the Gift of Art Education, Celebrating 10 Years of Scholarship Giving at the Eliot School

Read remarkable stories of some of our scholarship recipients and our Named Scholarships in honor of or in memory of loved ones. Click here to give the gift of art education by donating to our scholarship fund https://tinyurl.com/mn56k6yr Learn more at eliotschool.org. Our scholarship fund is critical to our mission. It enables us to provide art education for all regardless of what is in your pocket. The Scholarship Fund began in 2011 with an initial gift of $25,000 from a faithful donor. With countless unrestricted donations from individuals and local businesses and the establishment of 12 Named Scholarships, the fund has grown during its first ten years to over $470,000. In that time, 243 scholarship recipients have taken 991 classes. Taking a particular class holds profound meaning to different members of the Eliot School community. Our scholarships help our community explore the joy and discovery that art-making can bring, strengthening our resolve to inspire craft and creativity for all.