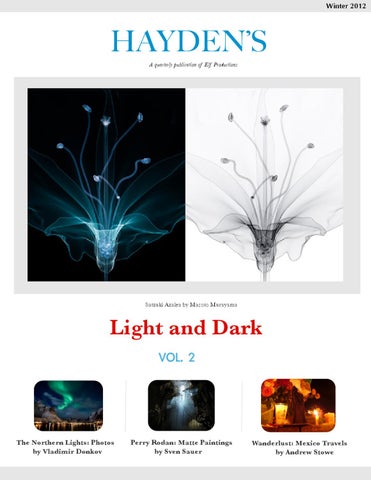 Haydenâ&#x20AC;&#x2122;s explores the creative impulse through visual stories. We hope to inspire you.

“COMMUNITY: A world where people authentically engage with one another and unlock their most generous selves.” - Belle Halparn and Kathy Lubar

Plants: A View Inside by Macoto Murayama

In the Garden with Maya Nair

Letter from the editor

Hello everyone, Thank you for perusing our magazine. We hope you enjoy it. First of all, I would like to apologize for the delay in putting this issue out. Hayden's is a free web magazine that I put together in my free time and the last period of time has been a bit busy. However, we are now on a schedule and I am thankful to say I have some help in different ways so getting issues out in the future will be more consistent. Our goal is to have 4 issues a year - one for each season. Every issue features an interview with a cinematographer or visual artist. We feature the inspiring art works of artists and entrepreneurs. We also highlight typically 2 businesses every issue that demonstrate significant social/cultural responsibility (in a myriad of ways) and environmental stewardship. Every issue also has a short essay by Amos Hayden, our muse, about art and society. We also have started a travel section titled Wanderlust spearheaded by Andrew Stowe, whose many travels and stories around the globe are quite delightful to hear. We invite your submissions to add to this new section.

In this issue, we have added a section towards the end about submissions. We will be having a new micro-site for Hayden's within our website at www.elfproductions.com this year. In this issue, we are happy to share with you the works of Sven Sauer, matte paintings and digital artwork; Macoto Murayama, botanical art work; Vladimir Donkov, photography; Jeff Scher, photography and video; Ellyn Maybe, poetry; Andrew Stowe, travel journalism; Duncan Asper, digital artwork; Beau Saunders, photography; Jessi Adam, photography; Alan Alejo, multimedia artwork; Maya Nair, gardening tips; Amos Hayden, essay; Demeny Politt, Girlington Garage, business with social/cultural responsibility; and Doctors without Borders, humanitarian work. We find the artists, entrepreneurs and organizations featured in here very inspiring. We hope you do too. Thank you. Enjoy! Best,

Plants: A View Inside

Duncan Asper is a native of southern California. Drawing and painting at an early age, Duncan studied both fine and commercial art. With over thirty years of experience in the graphics and design industry, Duncan has returned to fine art in recent years. Known for his masterful and decisive style, Duncan draws inspiration from his environment, experimenting with different textures, foils, metals, paints, and textiles. www.duncanasper.com | E: duncan@white-space.com

An Interview with Sven Sauer

This interview was conducted in March 2010. Since this time, Sven Sauer and his company Pixomondo has won an Oscar for cinematography for HUGO.

The Sky is Falling

Jeff Scher is a painter and experimental filmmaker. His work is in the permanent collection of the Museum of Modern Art and he has created work for HBO, PBS, the Sundance Channel and, most recently, a music video for Bob Dylan. "The Best of Times," a selection of films, was just published as an iPhone and iPad app. Mr. Scher teaches at the School of Visual Arts and at N.Y.U. Tisch

If anyone  ever  reads  5,000  words  a  minute, I  place  my  syllables  of  breath  it  will  be  you trading  paciﬁers  and  Gerbers for  algebra  and  metaphysics protégé  of  broken  nose  music, soundtrack  to  a  life  of  iron  and  garlic wise  meant  weird  meant  war the  gall  of  the  bones  in  your  nose plucked  like  a  banjo  by  a  heavy  hand whose  conscience  had  lost  its  sense  of  smell Claiming  no  rhythm  and  s%ll  you  dance you  spin  music  like  a  weaver with  a  wink  and  an  illuminated  harp you  dance  like  Fred  Astaire  is  breathing  mints and  cartwheels  through  your  hips What  is  the  equa%on  for  the  life  problem? 6  x  ﬁst  =  words. Ellyn Maybe is the author of the poetry/music CD, Rodeo for the Sheepish as well as books including The Cowardice of Amnesia, Praha and the Poet, Walking Barefoot in the Glassblowers Museum, Putting My 2 Cents In, A Talk With Nature and The Ellyn Maybe Coloring Book. She has performed at Lollapalooza, on the BBC, and opened the MTV Spoken Wurd Tour in Los Angeles. Writer’s Digest named her one of ten poets to watch in the new millennium.  www.ellynmaybe.com | E: ellynmaybe@aol.com

Up, Up and Away! by Alan Alejo.

Mexico Up Close with Andrew Stowe

Day of the Dead Altar, Oaxaca, 2009, photography by Andrew Stowe.

Andrew Stowe | Travel Photojournalist Andrew Stowe is a writer and ecologist who has volunteered on organic farms and helped create a manual for traditional, sustainable agriculture in Nepal and India. Mr. Stowe was born in Connecticut in 1982 and studied biology at Bates College in Maine. When he is back in the United States, he spends much of his time close to his father's birthplace in Northeast Kingdom, Vermont. E: andrew.stowe@gmail.com

Outside with Beau Saunders

Maya Nair | Photography & Writing Maya Nair grew up in Kerala, India and moved to the USA in 1982 and she worked as a telecommunications engineer for 25 years. She now lives with her husband in Atlanta, Georgia. Her passion is to grow organic vegetables and herbs to share with neighbors and friends.

“I know what it’s like to feel powerless or frustrated with your car. I decided to do something about that. I started my own shop where respect for the customer came first and foremost.” - Demeny Pollitt, Founder of Girlington Garage

Work We Support: Doctors without Borders In the Sudan 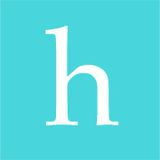 This issue features an interview with matte painter Sven Sauer.

This issue features an interview with matte painter Sven Sauer.