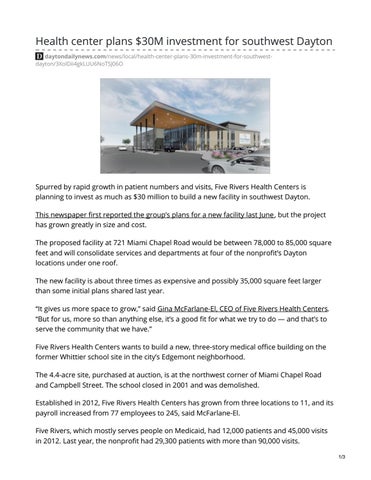 Spurred by rapid growth in patient numbers and visits, Five Rivers Health Centers is planning to invest as much as $30 million to build a new facility in southwest Dayton. This newspaper first reported the group’s plans for a new facility last June, but the project has grown greatly in size and cost. The proposed facility at 721 Miami Chapel Road would be between 78,000 to 85,000 square feet and will consolidate services and departments at four of the nonprofit’s Dayton locations under one roof. The new facility is about three times as expensive and possibly 35,000 square feet larger than some initial plans shared last year. “It gives us more space to grow,” said Gina McFarlane-El, CEO of Five Rivers Health Centers. “But for us, more so than anything else, it’s a good fit for what we try to do — and that’s to serve the community that we have.” Five Rivers Health Centers wants to build a new, three-story medical office building on the former Whittier school site in the city’s Edgemont neighborhood. The 4.4-acre site, purchased at auction, is at the northwest corner of Miami Chapel Road and Campbell Street. The school closed in 2001 and was demolished. Established in 2012, Five Rivers Health Centers has grown from three locations to 11, and its payroll increased from 77 employees to 245, said McFarlane-El. Five Rivers, which mostly serves people on Medicaid, had 12,000 patients and 45,000 visits in 2012. Last year, the nonprofit had 29,300 patients with more than 90,000 visits. 1/3

The nonprofit wants to consolidate four facilities, and seven departments, into the new facility. Originally, the new facility was estimated to be 50,000 to 65,000 square feet and cost $10 million to $12 million. But the project now is expected to cost about $27 million to $30 million, and the facility is expected to be much larger. Five Rivers Health Centers says it wants to build space for the future and not just for current patient needs. The nonprofit hopes to break ground this fall and finish construction in late fall of 2021. The nonprofit wants to consolidate existing departments from locations on Ludlow, Apple and Wyoming streets, near or on the Miami Valley Hospital campus, and administrative services currently at 2261 Philadelphia Drive. About 150 employees will move to the new center, which will have areas for dental, pediatrics, a women’s health center, internal medicine, specialists, acupuncture and massage therapy, the nonprofit said. Five Rivers’ four current buildings that will be consolidated have 50,000 square feet and 66 exam rooms. The new building will have 88 exam rooms. The new facility will have a pharmacy and needs a drive-thru because prescriptions have increased by 60% in the last three years, the nonprofit said. An estimated 600 patients each day will visit the new facility, not counting the 100 who every day are expected to stop by the pharmacy, McFarlane-El said. The pharmacy charges significantly reduced rates, she said. The Family Health Center at 2261 Philadelphia will remain in operation, including its new pharmacy. Originally, Five Rivers Health Centers was considering putting its new center close to Wyoming and Brown streets, near Miami Valley Hospital. But the nonprofit was impressed with the Carillon Edgemont neighborhood plan and wanted more space to grow. “For us, it’s not so much where you’re located as it is what you do when you’re there,” McFarlane-El said. The nonprofit would like to purchase some nearby vacant property to convert into community gardens and would like to provide locally grown produce to its patients. 2/3

Five Rivers Health Centers provides a one-stop shop for patients for medical needs that range from internal medicine to behavioral health to general surgery to massage therapy, the nonprofit said. The new facility will be a major investment and â&amp;#x20AC;&amp;#x153;game-changerâ&amp;#x20AC;? for the community, said Kim Patton, president of Elevar Design Group in Dayton, which is helping with the project. The proposed facility may request variances for city standards in neighborhoods of this type related to setbacks, maximum building heights and parking, Patton said. The nonprofit says it seeks to reduce chronic illnesses, racial disparities in medical treatment and high infant mortality rates. The highest utilization rate of the current four sites is residents who live in the 45406 zip code, which covers northwest Dayton. The centers also have high utilization from residents of 45402 (downtown and west Dayton), 45405 (north Dayton) and 45417 (west and southwest Dayton), officials said.

Dayton's new medical office building will be home to Five River's Health Center. Read about it in Dayton Daily News! 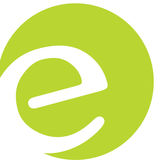