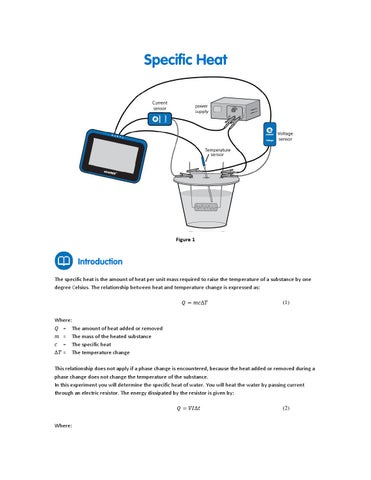 Where: Q = The amount of heat added or removed m = The mass of the heated substance c = The specific heat Î&#x201D;T = The temperature change This relationship does not apply if a phase change is encountered, because the heat added or removed during a phase change does not change the temperature of the substance. In this experiment you will determine the specific heat of water. You will heat the water by passing current through an electric resistor. The energy dissipated by the resistor is given by: đ?&#x2018;&#x201E; = đ?&#x2018;&#x2030;đ??źâ&#x2C6;&#x2020;đ?&#x2018;Ą Where:

einstein™Tablet+ with MiLAB or Android/iOS Tablet with MiLAB and einstein™LabMate Temperature sensor (-40 °C to 140 °C) Current sensor (2.5 A) Voltage sensor (25 V) Polystyrene cup Plexiglass plate to use as a cover to the polystyrene cup, with two small holes for the resistor’s legs and another hole for the temperature sensor. Power supply (6 V, 2 A) Resistor (5 , 10 W) Two alligator clips Wires

Assemble the setup as shown in Figure 1:

Program the sensors to log data according to the following setup: Temperature Sensor (-40 °C – 140 °C)

) on the main toolbar to begin recording data.

Switch the power supply to 6V DC and turn it on. Observe the graph.

Repeat the experiment with 80 mL of water and compare the slopes of the two graphs.