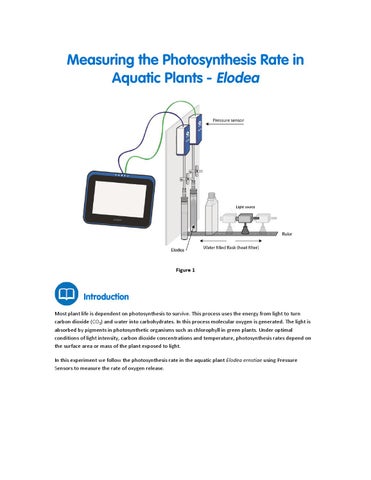 Most plant life is dependent on photosynthesis to survive. This process uses the energy from light to turn carbon dioxide (CO2) and water into carbohydrates. In this process molecular oxygen is generated. The light is absorbed by pigments in photosynthetic organisms such as chlorophyll in green plants. Under optimal conditions of light intensity, carbon dioxide concentrations and temperature, photosynthesis rates depend on the surface area or mass of the plant exposed to light. In this experiment we follow the photosynthesis rate in the aquatic plant Elodea ernstiae using Pressure Sensors to measure the rate of oxygen release.

Program the sensors to log data according to the following setup: Pressure (150 – 1150 mbar) Rate:

Monitor the photosynthesis rate until the pressure in the test tube with the Elodea reaches about 1100 mbar.

For more information on working with graphs see: Working with Graphs in MiLAB 1. 2.

To calculate the Transpiration rate you’ll need to create a difference graph. Save the graph

Select the graph of Input 1 (the control flask) then select the lowest point of Input 2. Select Functions a. Select Subtraction from the Functions dropdown list. b. In the Functions drop down menu select Subtract. c. In the G1 drop down menu select Pressure -1. In the G2 drop down menu select Pressure -2. d. In the Name edit box enter a name (e.g. Difference). 5. Apply a linear fit to the difference graph: a. Use the First cursor and the Second cursor by tapping on the screen. Then, select the desired range. )To remove the cursor, select and quickly flick it off the screen in any direction) b. Select Linear fit. The fit equation will be displayed below the x-axis. c. The slope of the fit line is the net reaction rate. An example of the graph, obtained in this experiment is shown below:

Pressure in the experimental system

Pressure in the control system

In the following graph, the result of the subtraction and the linear fit to this data are shown:

How is the pressure generated in the experiment related to photosynthesis? Why is a control system necessary in this experiment? Two types of controls can be set: one containing bicarbonate solution only, the other containing bicarbonate solution plus boiled Elodea segments. What is the difference between these two controls? How might an increase in the test tubesâ&amp;#x20AC;&amp;#x2122; temperature during the experiment affect the photosynthesis rate?