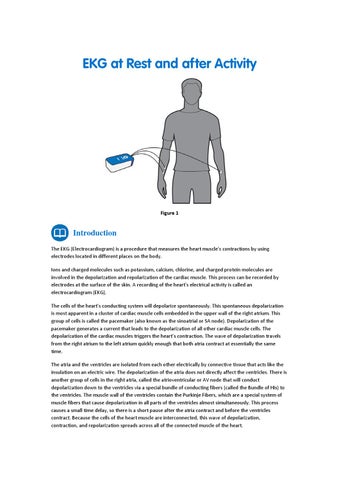 When a portion of the heart is polarized and the adjacent portion is depolarized, an electrical current is created that moves through the body. This current is greatest when one half of the connected portion of the heart is polarized and the adjacent half is not polarized. The current decreases when the ratio of polarized tissue to non-polarized tissue is less than one to one. The changes in these currents can be measured, amplified, and plotted over time. The EKG represents the summation of all the action potentials from the heart, as detected on the surface of the body. It does not measure the mechanical contractions of the heart directly. The impulse originating at the SA node causes the atria to contract, forcing blood into the ventricles. Shortly after this contraction, the ventricles contract due to the signal conducted to them from the atria. The blood leaves the ventricles through the aorta and pulmonary artery. The polarity of the cardiac muscle cells returns to normal and the heart cycle starts again.

The electrocardiogram (EKG) is a graphic tracing of the heart's electrical activity. A typical tracing consists of a series of waveforms occurring in a repetitive order. These waveforms begin from a flat baseline called the isoelectric line. Any deflection from the isoelectric line denotes electrical activity. The five major deflections on a normal EKG are designated by the letters P, Q, R, S, and T. One heart cycle is represented by a group of waveforms beginning with the P wave, followed by the QRS wave complex, and ending with the T wave. The P wave represents the depolarization of the atria and is associated with their contraction. The QRS wave complex consists of three waves. The first negative deflection is the Q wave and is followed by a positive deflection called the R wave. The complex ends with a negative deflection known as the S wave. The QRS wave complex denotes depolarization of the ventricles and is associated with their contraction. Atrial repolarization occurs during the depolarization of the ventricles. For this reason, the waveform associated with atrial repolarization is undetectable on an EKG. The last wave is called the T wave, and is usually represented by a positive deflection. The T wave indicates ventricular repolarization. Electrical energy is also generated by skeletal muscles, and can be seen as muscle artifacts if, for example, your arm is moved while the EKG is attached. The sequence from P wave to T wave represents one heart cycle. The number of cycles in a minute is called the heart rate and is typically 70-80 beats per minute at rest. Some typical times for portions of the EKG are:

Perform some exercise and then repeat steps 3-5.

Data Analysis Measure the EKG parameters in both the rest position and after exercise.

Figure 3 With the aid of the cursors make the following measurements (see Figure 3): Item

What is your conclusion?

Compare your EKG and breath parameters in different body positions (standing, sitting, lying down). Compare differences between you and some of your friends. Be careful not to overstress your body during the activities.

EKG at Rest and After Activity

EKG at Rest and After Activity