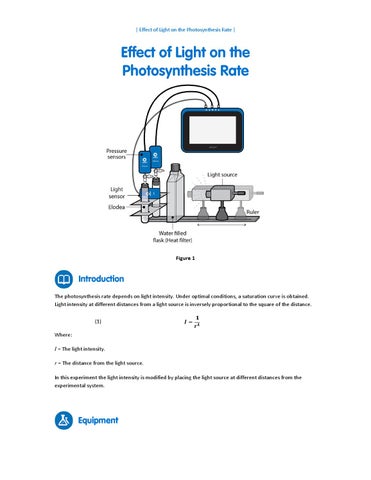 | Effect of Light on the Photosynthesis Rate |

The photosynthesis rate depends on light intensity. Under optimal conditions, a saturation curve is obtained. Light intensity at different distances from a light source is inversely proportional to the square of the distance. (1)

Connect the Pressure Sensors and the Temperature Sensor to ports on the einstein™ Tablet or einstein™ LabMate. Assemble the equipment as illustrated in Figure 1. a. Slice 2 g of the Elodea branch into segments that fit the size of the test tube. b. Place the Elodea segments into one test tube. The other test tube will serve as the experimental control. c. Fill the test tubes with tap water. The tap water should reach 1 cm below the stopper. d. Seal the test tubes tightly with the stoppers. e. Insert syringe extenders into the stoppers (Figure 2). f. Attach three-way valves to the other end of the syringe extenders. g. Connect the Pressure Sensors to the valves.

Fill the flat plastic bottles with tap water and place them between the light source and the test tubes. The water absorbs the heat radiating from the light source. In the Current Setup Summary window choose Full Setup and use the table below to set up the experiment. Make sure that only the Pressure and Temperature Sensors are selected under Measurements.

Program the sensors to log data according to the following setup: Pressure (150 – 1150 mbar) Rate:

| Effect of Light on the Photosynthesis Rate | 8.

Place a Light Sensor at the contact line of the two test tubes. Place the sensor’s opening exactly opposite the center of the light source. Make sure the Light sensor is immobile. Connect the Light Sensor to one of the ports on the einstein™ Tablet or einstein™ LabMate. Program the sensors to log data according to the following setup:

Prepare a table and record the light intensity at different distances from the test tubes.

For more information on working with graphs see: Working with Graphs in MiLAB 1.

To calculate the net reaction rate, you will need to create a difference graph by subtracting the Pressure graph obtained in the control system from that of the experimental system:

) on the upper tool bar and select Functions.

In the Name edit box enter a name (e.g. Difference). In this experiment, a set of linear segments are obtained, each representing a different distance of the light source from the test tubes. The linear segments are isolated by selecting one point on the graph when the light was moved to a certain distance and another point when the plant was moved from the distance. a. Apply a linear fit to the selected segment of the graph: b. Select Linear fit. The fit equation will be displayed below the x-axis. c.

The slope of the fit line is the net reaction rate.

Repeat steps 2 for each linear segment of the graph.

An example of the graph and linear fits obtained in this experiment is shown below (the black lines are the linear fits):

| Effect of Light on the Photosynthesis Rate | 5

| Effect of Light on the Photosynthesis Rate |

Examine the effect of light wavelength on photosynthesis. Place blue, green, and red filters between the test tubes and the light source. At limited light intensities, how does an increase in the mass of Elodea affect the rate of photosynthesis? Design an experiment to test your hypothesis.

Effect of Light on Photosynthesis

Effect of Light on Photosynthesis