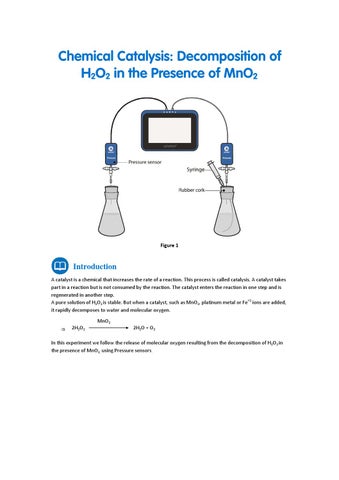 Introduction A catalyst is a chemical that increases the rate of a reaction. This process is called catalysis. A catalyst takes part in a reaction but is not consumed by the reaction. The catalyst enters the reaction in one step and is regenerated in another step. A pure solution of H2O2 is stable. But when a catalyst, such as MnO2, platinum metal or Fe+2 ions are added, it rapidly decomposes to water and molecular oxygen. MnO2 (1)

In this experiment we follow the release of molecular oxygen resulting from the decomposition of H2O2 in the presence of MnO2, using Pressure sensors.

Connect the Pressure sensors to ports on the einstein™Tablet or LabMate. Select Pressure sensors. Assemble the equipment as illustrated in Figure 1. A syringe needle (20-gauge) is inserted through the cork, until its tip projects out slightly. At the other end of the syringe needle, projecting out of the upper side of the cork, attach a three-way valve to the pressure sensor. Turn the valve until its opening is directed vertically. In this position, air can flow through the valve. Insert an additional needle into one of the corks. A syringe filled with 3% H2O2 solution will be attached to this needle later. For this experiment the flasks must be tightly sealed. For more information see: Sealing.

13. Save your data by selecting Save (

On one graph select the initial pressure and the final pressure. Do the same for the second graph. How did the pressure change in each of the bottles? Find the difference between the two sets of values. Calculate the reaction rate of H2O2 decomposition. Create a differential graph by subtracting the Pressure graph of the control flask from that of the experimental flask: a. Use the cursor to select the beginning and end points of the plot line from the flask in which the MnO2 was added. b.

In the Functions drop-down menu select the Setup (

) button next to the Subtract equation.

An example of the graph obtained in this experiment is shown below:

How is the pressure affected by the decomposition of H2O2? Compare the changes in pressure in the two flasks. Did you observe a change in flask 1? In flask 2? Explain the differences. Which of the flasks serves as a control? Explain. Why is a control system needed in the experiment? What is the effect of adding MnO2 crystals to the flasks? What would be the effect of adding increasing amounts of MnO2 on the reaction rate? What would be the effect on the H2O2 disproportionation rate of raising the temperature in the bottles during the experiment?