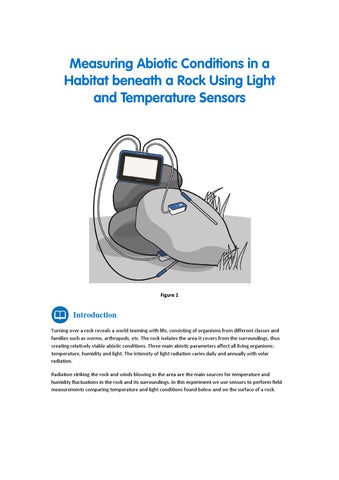 Introduction Turning over a rock reveals a world teeming with life, consisting of organisms from different classes and families such as worms, arthropods, etc. The rock isolates the area it covers from the surroundings, thus creating relatively stable abiotic conditions. Three main abiotic parameters affect all living organisms: temperature, humidity and light. The intensity of light radiation varies daily and annually with solar radiation. Radiation striking the rock and winds blowing in the area are the main sources for temperature and humidity fluctuations in the rock and its surroundings. In this experiment we use sensors to perform field measurements comparing temperature and light conditions found below and on the surface of a rock.

Equipment Setup Note: This experiment is performed in the field and the einstein™ LabMate is used detached from an external power source. Therefore, charge the battery prior to going outdoors. 1.

Notes: Dangerous animals such as poisonous snakes and spiders may be present in the habitat being studied. Don&#39;t place the Light Sensor under the rock. Take security and safety precautions when leaving the einstein™ LabMate and computer in the field.

Current Setup Summary Program the sensors to log data according to the following setup: Temperature (-40°C to 140°C) Rate:

While surveying the area where you are going to perform this experiment, look for a rock with these characteristics: The rockâ&amp;#x20AC;&amp;#x2122;s length and width should be 20 â&amp;#x20AC;&amp;#x201C; 40 cm. The rock should not be tightly lodged in the soil. The base should consist of small hollows that can easily support the necessary sensors. It should be exposed to direct light radiation. 2. Turn the rock over and quickly place the Temperature Sensor beneath it. 3. Put the rock back in its initial position. 4. Place the Light Sensor on the ground near, but not under the rock. 5. Attach the additional Temperature Sensor and Light Sensor to the surface of the rock. Use adhesive strips of tape to ensure stable positioning of the sensors. 6. The part of the Temperature Sensor which makes the measurements is located in the tip of the probe. Make sure this part of the probe touches the surface of the rock. 7. Attach the Light Sensor to the rock, pointing in the direction in which maximal readings are obtained. 8. Place your computer and einsteinâ&amp;#x201E;˘ LabMate in a stable position. 9.

10. While MultiLab is logging data, record additional important information: a. Date and hour of measurements (automatically marked). b. Weather conditions. c. Type of site: open field, forest, etc. d. Changes or events occurring during the measurements such as sudden winds, showers, cloud movements and animal movements. e. Any other pertinent information such as recent timber cutting or construction activities 11. After 45 minutes to an hour, when sufficient data is collected, Tap Stop ( 12. Save your data by tapping Save (

Data Analysis For more information on working with graphs see: Working with Graphs in MiLAB 1. 2. 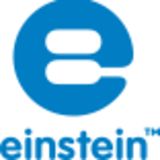