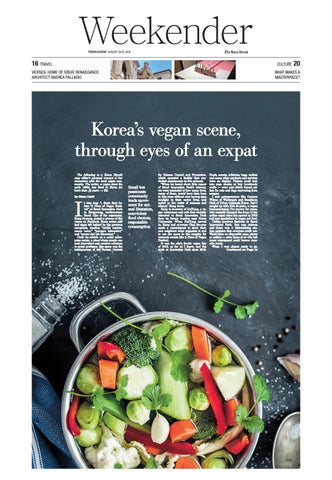 WHAT MAKES A MASTERPIECE?

Korea’s vegan scene, through eyes of an expat The following is a Korea Herald copy editor’s personal account of her encounters with the local vegan community. The writer, a vegan since the early 1990s, has lived in Korea for more than 15 years. — Ed.

t was Aug. 7, three days before “A Piece of Vegan Festival” at Seoul Innovation Park in Eunpyeong, northwestern Seoul. One of the organizers, Kang So-yang, posted a picture of the venue on Facebook. Some rooms still had signs left behind by the previous occupants, reading “rabbit maintenance room,” “pyrogen laboratory” and “mouse and rat laboratory.” Until its rebirth as a social enterprise center, a place where people can seek innovative and creative solutions to social problems, this space was the headquarters of the Korean Centers

for Disease Control and Prevention, which operated a facility that conducted experiments on live animals. “When we heard about (this aspect of Seoul Innovation Park’s history), we were reminded of how many lives, many of them, would have been born in this room without ever having seen sunlight in their entire lives, and ended in the midst of screams and silence,” Kang wrote. Kang is co-owner of DalYang, a vegan restaurant and cafe that recently relocated to Seoul Innovation Park from its former location near Korea University. When DalYang moved in, Kang and co-owner Choi Seo-yun made a commitment to show their new neighbors what veganism is and to use the space in the complex for outreach events like A Piece of Vegan Festival. It was the city’s fourth vegan fair of 2019, as far as I know, and the sixth at Innovation Park since 2016.

Foods, sweets, toiletries, bags, wallets and many other products and services were on display. Visitors could look into yoga classes or buy handmade crafts — even cute fabric funnel collars for cats and dogs recovering from surgery. I met entrepreneurs like Carmen Wilson of Wasteupso and Sunghyun Park of Urban Originals Korea. And I caught up with Kim So-youn, a vegan businesswoman I’ve known for years, who recently changed the focus of the online vegan store she opened in 2009 and now specializes in vegan pet food. Unlike previous festivals at Seoul Innovation Park, this was indoors and there was a dishwashing station upstairs that everyone could use. There were no disposable cups, plates or cutlery — even those of us who left home unprepared could borrow reusable items. When I was almost ready to go, Continued on Page 14 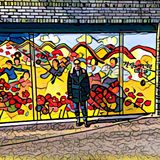 Here's Page 1 of an article I wrote for the paper's Weekender section about the growth of the local vegan community.

Here's Page 1 of an article I wrote for the paper's Weekender section about the growth of the local vegan community.