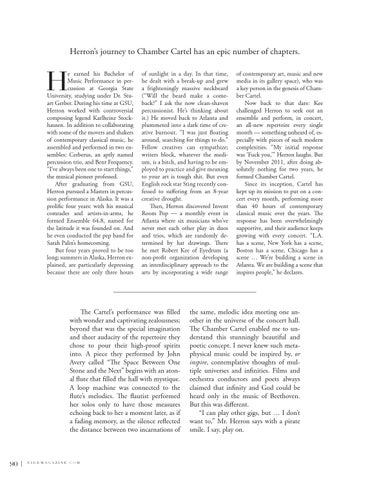 Herron’s journey to Chamber Cartel has an epic number of chapters.

e earned his Bachelor of Music Performance in percussion at Georgia State University, studying under Dr. Stuart Gerber. During his time at GSU, Herron worked with controversial composing legend Karlheinz Stockhausen. In addition to collaborating with some of the movers and shakers of contemporary classical music, he assembled and performed in two ensembles: Cerberus, an aptly named percussion trio, and Bent Frequency. “I’ve always been one to start things,” the musical pioneer professed. After graduating from GSU, Herron pursued a Masters in percussion performance in Alaska. It was a prolific four years: with his musical comrades and artists-in-arms, he formed Ensemble 64.8, named for the latitude it was founded on. And he even conducted the pep band for Sarah Palin’s homecoming. But four years proved to be too long; summers in Alaska, Herron explained, are particularly depressing because there are only three hours

of sunlight in a day. In that time, he dealt with a break-up and grew a frighteningly massive neckbeard (“Will the beard make a comeback?” I ask the now clean-shaven percussionist. He’s thinking about it.) He moved back to Atlanta and plummeted into a dark time of creative burnout. “I was just floating around, searching for things to do.” Fellow creatives can sympathize; writers block, whatever the medium, is a bitch, and having to be employed to practice and give meaning to your art is tough shit. But even English rock star Sting recently confessed to suffering from an 8-year creative drought. Then, Herron discovered Invent Room Pop — a monthly event in Atlanta where six musicians who’ve never met each other play in duos and trios, which are randomly determined by hat drawings. There he met Robert Kee of Eyedrum (a non-profit organization developing an interdisciplinary approach to the arts by incorporating a wide range

The Cartel’s performance was filled with wonder and captivating zealousness; beyond that was the special imagination and sheer audacity of the repertoire they chose to pour their high-proof spirits into. A piece they performed by John Avery called “The Space Between One Stone and the Next” begins with an atonal flute that filled the hall with mystique. A loop machine was connected to the flute’s melodies. The flautist performed her solos only to have those measures echoing back to her a moment later, as if a fading memory, as the silence reflected the distance between two incarnations of

of contemporary art, music and new media in its gallery space), who was a key person in the genesis of Chamber Cartel. Now back to that dare: Kee challenged Herron to seek out an ensemble and perform, in concert, an all-new repertoire every single month — something unheard of, especially with pieces of such modern complexities. “My initial response was ‘Fuck you,’” Herron laughs. But by November 2011, after doing absolutely nothing for two years, he formed Chamber Cartel. Since its inception, Cartel has kept up its mission to put on a concert every month, performing more than 40 hours of contemporary classical music over the years. The response has been overwhelmingly supportive, and their audience keeps growing with every concert. “L.A. has a scene, New York has a scene, Boston has a scene, Chicago has a scene … We’re building a scene in Atlanta. We are building a scene that inspires people,” he declares.

the same, melodic idea meeting one another in the universe of the concert hall. The Chamber Cartel enabled me to understand this stunningly beautiful and poetic concept. I never knew such metaphysical music could be inspired by, or inspire, contemplative thoughts of multiple universes and infinities. Films and orchestra conductors and poets always claimed that infinity and God could be heard only in the music of Beethoven. But this was different. “I can play other gigs, but … I don’t want to,” Mr. Herron says with a pirate smile. I say, play on. 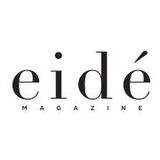