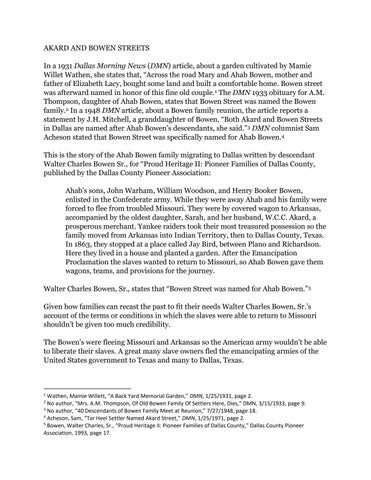 AKARD AND BOWEN STREETS In a 1931 Dallas Morning News (DMN) article, about a garden cultivated by Mamie Willet Wathen, she states that, “Across the road Mary and Ahab Bowen, mother and father of Elizabeth Lacy, bought some land and built a comfortable home. Bowen street was afterward named in honor of this fine old couple.1 The DMN 1933 obituary for A.M. Thompson, daughter of Ahab Bowen, states that Bowen Street was named the Bowen family.2 In a 1948 DMN article, about a Bowen family reunion, the article reports a statement by J.H. Mitchell, a granddaughter of Bowen, “Both Akard and Bowen Streets in Dallas are named after Ahab Bowen’s descendants, she said.”3 DMN columnist Sam Acheson stated that Bowen Street was specifically named for Ahab Bowen.4 This is the story of the Ahab Bowen family migrating to Dallas written by descendant Walter Charles Bowen Sr., for “Proud Heritage II: Pioneer Families of Dallas County, published by the Dallas County Pioneer Association: Ahab’s sons, John Warham, William Woodson, and Henry Booker Bowen, enlisted in the Confederate army. While they were away Ahab and his family were forced to flee from troubled Missouri. They were by covered wagon to Arkansas, accompanied by the oldest daughter, Sarah, and her husband, W.C.C. Akard, a prosperous merchant. Yankee raiders took their most treasured possession so the family moved from Arkansas into Indian Territory, then to Dallas County, Texas. In 1863, they stopped at a place called Jay Bird, between Plano and Richardson. Here they lived in a house and planted a garden. After the Emancipation Proclamation the slaves wanted to return to Missouri, so Ahab Bowen gave them wagons, teams, and provisions for the journey. Walter Charles Bowen, Sr., states that “Bowen Street was named for Ahab Bowen.” 5 Given how families can recast the past to fit their needs Walter Charles Bowen, Sr.’s account of the terms or conditions in which the slaves were able to return to Missouri shouldn’t be given too much credibility. The Bowen’s were fleeing Missouri and Arkansas so the American army wouldn’t be able to liberate their slaves. A great many slave owners fled the emancipating armies of the United States government to Texas and many to Dallas, Texas.

The Akard family also hired slaves. In a 1945 DMN article, “Dallas Ex-Slave, 102, Passes Time Fishing,” Ras Harrison states that he was purchased by an owner in Georgia, but had worked for the Akard family when he came to Dallas, which would have been during the Civil War.6 John H. Cochran in his history, “Dallas County,” a history published in 1928 and widely accepted by Dallas residents, in his chapter on the Civil War describes how Dallas flourished and enriched itself from selling supplies to the Confederacy during the Civil War. He states that the prosperity of the Civil War era is what gave Dallas its boost and subsequent success. These are key extracts from the book. But Dallas County, from 1859 to 1861, had made such rapid and successful progress in the production of wheat, corn, forage meat and other necessary supplies of food, she was recognized as the center of the food-producing counties of Texas, so much that the Confederate Government established and maintained a general quartermasters and commissary headquarters at Dallas for the collection of food and supplies for the army of the Trans-Mississippi Department. Also, established a transportation and recruiting department there and a manufacturing department at Lancaster, where arms were repaired and pistols manufactured. Dallas was general headquarters for all these departments, so the officers and their families and all necessary details made Dallas their temporary home during the war, thus supplying the places of the enlisted soldiers. Dallas was hardly reduced to marginal economic circumstances and with the Confederate military stationed there, there wouldn’t be a security problem. As to how Dallas County was able to produce so much food and support the supply of war materials to the Confederate army Cochrane explains: Besides, large numbers of negroes were brought into Dallas County for food and for protection during the war, and were gladly hired to the citizens for their food and clothes. Nearly every family, which had no negroes of their own, hired one or more of these negroes and were thus enabled to cultivate all of their land in wheat, corn and oats, so Dallas County continued to be the great food producing center of Texas. Its reputation in this respect became so great that many desirable citizens were attracted by its prosperity and permanently settled in the county and contributed much to its future development.7 6

Haskins, L.B., “Dallas Ex-Slave, 102, Passes Time Fishing,” DMN, 7/8/1945, page 12. The extracts are from a special double edition published by The Aldrege Book Store in Dallas in 1966. This volume has, “History of Dallas County, Texas,” by John Henry Brown, and “Dallas County: A Record of its Pioneers and Progress,” by John H. Cochran. As the front-page states, “The Two Major Chronicles of Early Dallas County Now Republished Together,” with a foreword by Sam Acheson. Cochrane’s book was originally published in 1928 and printed by Direct Advertising and Printing Co., Dallas, Texas. The volume has the original pages and the quotes are on pages 87-88. 7

During the Civil War slaveholders sent their slaves to Texas to prevent their emancipation by the American army and their slaves fleeing to the American army lines. Dallas had an abundance of cheap slave labor to exploit. The success of Dallas starts with war profiteering supplying the Confederate armies with food, supplies and war materials in their fight to preserve slavery by exploiting cheap slave labor. For those who marvel at the wealth of Dallas looking at the great buildings of downtown Dallas and northward, should also go visit the Greens, Pinks, Whites, and Browns, on Highland Village Dr. to see where some of the descendants of the exploited slaves live. Ahab Bowen and W.C.C. Akard fled to Dallas to keep their slaves enslaved and prevent the American army from liberating them.

Akard and Bowen fled first Missouri, then Arkansas to keep the American armies from freeing them during the Civil War. The history of their slave ownership and the fact that they were were slaveowners that refugeed to Dallas, Texas to avoid their slaves from being freed documented in this essay.