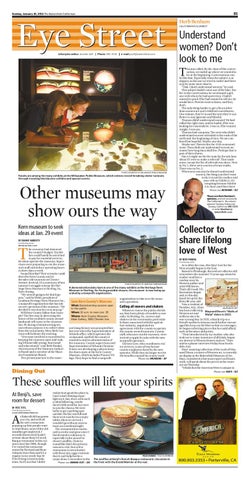 Fossils are among the many exhibits at the Milwaukee Public Museum, which entices record-breaking visitor turnouts through traveling blockbuster exhibits and special events.

Other museums may show ours the way Kern museum to seek ideas at Jan. 29 event Contributing writer dhardisty@bak.rr.com

s Bakersfield has grown as a city, and with all the new restaurants popping up that people want to read about, some of the old standbys get neglected. I recently discovered I hadn’t written about Benji’s French Basque restaurant in this column since late 2004, though I’ve visited the restaurant owned by Bernard and Rene Arduain since then and it’s a regular in my yearly Top 10 Fine Dining recommendations. So it’s not that I didn’t

homas called. By the close of the conversation, we ended up where we wanted to be at the beginning. Conversations can be like that. Especially when the subject is as slippery as the one we tried to tackle and there may be none more elusive. “Dad, I don’t understand women,” he said. This subject hadn’t come out of the blue. Earlier in the conversation, he mentioned a girl, one with whom he had spent time. I hadn’t wanted to prod. If he had wanted to tell me, he would have. Parents want to know, and they don’t. The only thing harder to get a fix on other than women are one’s children’s sweethearts. One minute, they’re in and the next they’re out. Better to stay ignorant and blissful. Thomas didn’t understand women? He had called the right man, and he hadn’t. If he was looking for camaraderie, I was in. If he wanted insight, I was out. Thomas had company. The men who didn’t understand women extended to the ends of the earth and the beginning of time. We are confused but hopeful. Maybe, one day. Maybe not. Therein lies the 11th commandment. Thou shalt not understand women no matter how long thou shall live. Perhaps that is part of their charm. Since I might not be the man for the job, how about if I were to make a referral? That made sense, except the list of referrals was short. Next to No. 1, there were a series of erase marks. There was no No. 2. When your son says he doesn’t understand women, the thing you don’t want to do is to use his mother and your wife as Exhibit A. It’s tempting because Exhibit A is close, and there have Please see BENHAM / D2 These are Herb Benham’s opinions, and not necessarily The Californian’s. His column appears Tuesday, Friday and Sunday. Call him at 395-7279 or write hbenham@ bakersfield .com.

A demonstration dairy barn is one of the many exhibits at the Heritage Farm Museum in Sterling, Va. Facing possible closure, the museum is now being operated by a nonprofit organization.

um’s long history was prompted late last year when the Superintendent of Schools office, which operates the compound, notified the county it wanted to end its administration of the museum. County supervisors and Superintendent of Schools Christine Frazier are developing a plan to keep the doors open at the Kern County Museum, which includes Pioneer Village. They hope to find a nonprofit

organization to take over the museum’s operation.

Calling all movers and shakers Whatever course the parties decide on, they have plenty of models to consider. In Sterling, Va., movers and shakers in the community, particularly those associated with the agriculture industry, negotiated an agreement with the county to operate the county-owned museum. County staff, who once ran the museum, were invited to apply for jobs with the new nonprofit operators. Christie Love, who coordinates visitor services, is one of two former county employees hired by the new operator. While they no longer receive the benefits enjoyed by county workPlease see MUSEUM / D7

As is often the case, Abe Hays’ love for the West actually began in the East. Raised in Pittsburgh, the avid art collector still remembers the moment 75 years ago when his mother read him a cowboy story by Western author and artist Will James. That’s all it took. His fascination began and, to this day, hasn’t let up for the feisty 80-year-old. Now a resident of OF BAKERSFIELD Paradise, Ariz., Hays PHOTO COURTESYMUSEUM OF ART has been collecting Maynard Dixon’s “Walls of Western art and Walpi” dates to 1923. artifacts since he was a young boy. In 1935, a family trip to a friend’s northern Arizona ranch further encouraged his focus on the West so that as a teenager, he began collecting pieces that he could afford, such as literature and prints. “That introduction by my mother, who also took me to many museums of all kinds, began my interest in Western history and art,” Hays said in a phone interview Friday from Scottsdale, Ariz. Hays’ stunning collection of the work of Maynard Dixon, a master of Western art, is currently on display at the Bakersfield Museum of Art. Hays, considered a foremost expert on Dixon’s work, will speak about the pieces at the museum on Thursday. “I think that the American West is unique in Please see HAYS / D2

These souffles will lift your spirits BY PETE TITTL

At Benji’s, save room for dessert

he economy had slammed the county’s budget. Tax dollars could barely be stretched to pay for essential services, let alone operate the museum. Supervisors were preparing to cut the museum’s staff and reduce operating hours to three days a week. Sound familiar? That scenario could describe Kern County and its decades-old museum on Chester Avenue. Instead, it’s a summary of last summer’s struggle to keep the Heritage Farm Museum in Sterling, Va., from closing. “We weren’t going to let that happen,” said Su Webb, president of Loudoun Heritage Farm Museum Inc., a nonprofit organization that has taken over operation of the museum. “We decided it was time for us to step up.” Will Kern County follow that example? The first step in determing the future of the troubled county-owned landmark will come at the museum Jan. 29 during a brainstorming session whose purpose is to collect ideas from the community. Mary Beth Garrison will facilitate the meeting. “Everyone involved is committed to keeping the museum open and making it financially strong, functional and educational,” said Beth Pandol, chairwoman of the Museum Authority Board and a member of the Museum Foundation Board. This pivotal juncture in the muse-

realize how good this place is; I just wasn’t shining a spotlight on it. But, then, with such a rabid following, maybe there’s little need for my voice to join the chorus. We were lucky to get a parking spot outside, the bar was full and there were exactly two empty tables when we arrived. I wouldn’t go without reservations on a weekend night. The restaurant has continued to evolve and grow since I last devoted a column to it, especially in the area of its dessert soufflés. I hate to sound like that’s the primary reason to visit, but so few restaurants in town bother with these airy, eggy creations that it can’t help but be a major draw. I remember in the Please see DINING OUT / D5

The souffles at Benji's French-Basque restaurant: chocolate in the front with the Grand Marnier at the rear.

DINING OUT: Not many restaurants in town take the time to create souffles CONTINUED FROM D1

early days of Benji’s that we sometimes visited when the kitchen was too busy to bother with these special desserts, even if you placed your order at the same time that you selected your entrée. Now the menu has Gran Marnier, raspberry, chocolate and lemon at $5.75 a person. Heck they even make baked Alaska ($4.50 a person). My son had no clue what that even was. It’s a generational thing, as it was so popular in the 1950s when people thought flaming desserts was the greatest thing since TV dinners. Anyway, let’s reverse the order of our meal and go right to the soufflés. Though they all sounded tempting, of course we ordered the chocolate, if only to get that creamy, light chocolate sauce that our waitress poured into the center and left on the table for more self-garnishment. I’ll be honest with you. If you’re on a New Year’s diet, don’t go if you can’t resist this. You’ll see them at other people’s tables and all your willpower will collapse like a soufflé getting hit with a sharp knife. Benji’s knows how to make soufflés, and some day I’ll work up the courage to try the raspberry. I’m sure it’s great. The restaurant, celebrating its 25th anniversary this year, has many other reasons to recommend it. If you’re used to the other Basque restaurants in town, what you can expect from Benji’s is a bit more graceful product, particularly in the sauces, which I think can stand up to Valentien, T.L. Maxwell’s, The Bistro and the other high-end restaurants in town. On our visit we ordered the beef ravioli ($17.75), the rack of lamb with garlic potatoes ($24) and the filet mignon with pepper cognac sauce ($24.75). Everything was great. The six large beef ravioli were presented with a serviceable tomato sauce. The meat used for the steak was fine, but that dark cognac sauce

Better hurry. There are not many seats left as the dinner crowd starts to fill in the dining area at Benji's French-Basque Restaurant on Rosedale Highway.

At Benji's French-Basque Restaurant, the food just keeps coming! After the soup, beans, French bread and salsa, here comes the green salad, marinated tomatoes, and pickled tongue. And you have the entree yet to come with fries and vegetables.

was just begging to be sopped up with bread. And the garlic potatoes (pan fried) deserved to share billing with the rack of lamb, which was prepared simply but with the perfect amount of garlic. Another distinctive thing about Benji’s is that they serve items a lot of other places don’t, such as pan-

The Arduain brothers of Benji's French-Basque Restaurant. That's Benji on the left with brother Rene.

fried frog legs, roast duck and sweetbreads. The menu has the typical assortment of steak, chicken and salmon, but for the more adventurous, Benji’s is the place. If you like veal, try the version here with mushroom sauce. The Basque setup (soup, beans, salsa, French bread, pickled tongue, tossed salad, green beans, fresh tomatoes tossed with onions, French fries) compares favorably with what other restaurants in town serve. Not particu-

larly distinctive, but I had no complaints there. The most noteworthy difference was the oil and vinegar dressing on the salad and pickled tongue had a creamier style than its competitors use. We didn’t get a wine list and were not enthused about the slim pickings on the wine by the glass list. If that’s all that’s available, it’s a curious mismatch considering the quality of what the kitchen produces. Service was really solid. We

had a veteran waitress who had an Old Country accent and I imagine if I were passing through Bakersfield and pulled off the freeway to visit Benji’s, I’d find that quite charming. She was a professional who was mostly stunned that my son had never tried pickled tongue before. I paid him a buck to sample it, so that’s done now. Benji’s French Basque Restaurant can be recommended for a fine dining experience.

One of the must-have dishes at Benji's French-Basque Restaurant is the broiled lamb chops. article by Pete Tittl photos by Felix Adamo. from The Bakersfield Californian

article by Pete Tittl photos by Felix Adamo. from The Bakersfield Californian