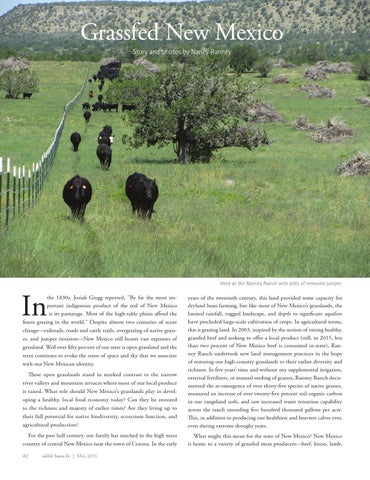 Herd at the Ranney Ranch with piles of removed juniper.

the 1830s, Josiah Gregg reported, "By far the most important indigenous product of the soil of New Mexico is its pasturage. Most of the high-table plains afford the finest grazing in the world." Despite almost two centuries of acute change—railroads, roads and cattle trails, overgrazing of native grasses, and juniper invasion—New Mexico still boasts vast expanses of grassland. Well over fifty percent of our state is open grassland and the term continues to evoke the sense of space and sky that we associate with our New Mexican identity. These open grasslands stand in marked contrast to the narrow river valleys and mountain terraces where most of our local produce is raised. What role should New Mexico’s grasslands play in developing a healthy, local food economy today? Can they be restored to the richness and majesty of earlier times? Are they living up to their full potential for native biodiversity, ecosystem function, and agricultural production?

years of the twentieth century, this land provided some capacity for dryland bean farming, but like most of New Mexico’s grasslands, the limited rainfall, rugged landscape, and depth to significant aquifers have precluded large-scale cultivation of crops. In agricultural terms, this is grazing land. In 2003, inspired by the notion of raising healthy, grassfed beef and seeking to offer a local product (still, in 2015, less than two percent of New Mexico beef is consumed in-state), Ranney Ranch undertook new land management practices in the hope of restoring our high-country grasslands to their earlier diversity and richness. In five years’ time and without any supplemental irrigation, external fertilizers, or manual seeding of grasses, Ranney Ranch documented the re-emergence of over thirty-five species of native grasses, measured an increase of over twenty-five percent soil organic carbon in our rangeland soils, and saw increased water retention capability across the ranch exceeding five hundred thousand gallons per acre. This, in addition to producing our healthiest and heaviest calves ever, even during extreme drought years.

For the past half century, our family has ranched in the high mesa country of central New Mexico near the town of Corona. In the early

What might this mean for the state of New Mexico? New Mexico is home to a variety of grassfed meat producers—beef, bison, lamb, 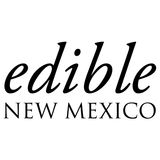 This issue investigates some core ingredients that form a basis for a regional cuisine in New Mexico. These ingredients, both literal (corn,...

This issue investigates some core ingredients that form a basis for a regional cuisine in New Mexico. These ingredients, both literal (corn,...